Landlords are selling off properties and paying down debt, data show

The first evidence has emerged that buy-to-let landlords are increasingly selling properties or paying down their mortgage debt following a barrage of tax and regulatory changes.Data from UK Finance, the industry body, show that growth in outstanding buy-to-let mortgages is failing to keep pace with new mortgages being granted, in a reversal of the broad relationship between the two over the past decade. This strongly suggests some buy-to-let mortgages are being redeemed as investors sell rental properties.Lucian Cook, director of residential research at estate agent Savills, which obtained the figures, said: Its the first concrete evidence that people are rationalising their portfolio or exiting the sector. Its not an exodus or a mass offloading of buy-to-let stock, but it suggests the combined range of tax measures is causing some people to re-evaluate whether or not buy-to-let is for them. The difference between the two measures widened to a 10-year high in the year to June 2017. Although 78,000 new buy-to-let mortgages were granted during this period, the overall number of mortgaged rental properties only expanded by 28,000  a net difference of 50,000 properties. The figures exclude remortgaging, and show an acceleration of a trend that began in the third quarter of 2016. 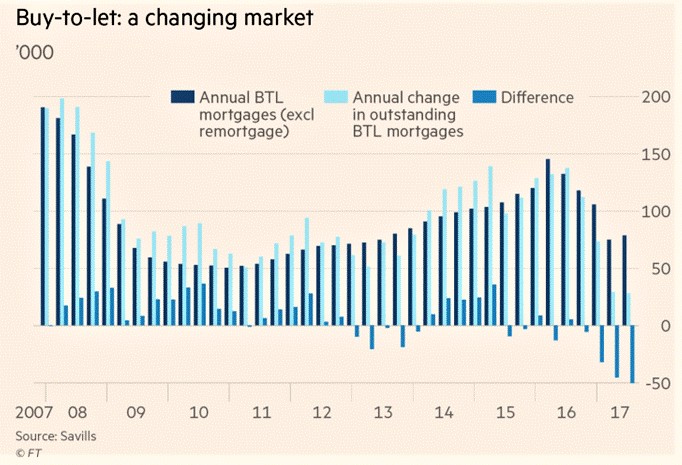 Stephen Johnson, managing director of commercial lending at Shawbrook Bank, said the data appeared to support anecdotal evidence that landlords sentiment had slightly soured. People are deleveraging and selling down parts of their portfolios in anticipation of tax rises and rising costs, he said. Heavily leveraged buy-to-let investors have been under pressure since the beginning of a phased withdrawal of higher rate tax relief on mortgage interest, which began in April. By 2020, the relief will be withdrawn entirely. Buy-to-let lending rules have also tightened, with a stress test introduced this year and new rules for lending to portfolio landlords from September 2017. The combined effect has been to curb demand in parts of the country where rental yields (annual rent as a proportion of the property purchase value) are lower. In these locations, it is much harder for mortgaged borrowers to cover their costs and make a profit.

A survey by Totally Money this week found the highest-yielding postcodes in Britain were in Liverpool, Plymouth, Cleveland, Preston, Dudley and Nottingham. By contrast, no postcodes in London or the Home Counties made the top 25.The trend is likely to accelerate if the Bank of England pushes through further interest rate rises, which will increase costs for mortgaged landlords. In forecasts published last week, Savills predicted a 27 per cent reduction in the number of mortgaged buy-to-let transactions over the next five years. When you get that combination of interest rate rises and the loss of tax relief, youre much more likely to see it hit home, Mr Cook said. Stamp duty costs have also risen for buy-to-let investors, after the introduction last year of a three percentage point surcharge for purchases in the sector as well as for second homes. RecommendedHow to solve the UK housing crisisLondon house prices will fall 2% next year, says forecastLarge buy-to-let landlords braced for tougher mortgage rulesHowever, property market experts said the loss of tax relief was the bigger blow for most landlords. While higher stamp duty may be preventing new buyers from entering the sector, it will not influence those already in it. Mr Johnson of Shawbrook Bank said the UK Finance figures had been foreshadowed in recent surveys of landlords, when asked how they would react to more challenging conditions.

The typical response is: Were looking to raise rents. Thats not always in your gift. But responses saying were looking to pay down debt and sell off parts of our portfolio were almost as commonplace as looking at the rent. The data ignore the impact of cash buyers who may remain active in the buy-to-let market. While the loss of tax relief on mortgage interest will not have affected them, they would still have to absorb extra stamp duty costs. Receipts from the stamp duty surcharge have continued to rise since being introduced in April 2016. It raised £1.7bn in 2016-17, according to HMRC estimates, and more than £1bn in the six months to September 2017. Landlords with relatively small mortgages are more likely to stay in the market, since their repayments will be more affordable even under higher interest rates and stressed scenarios. Research by academics from the London School of Economics published in December last year found the main sources of purchasing finance for landlords were personal savings (used by 41 per cent of landlords), buy-to-let mortgages (36 per cent) and inherited funds (17 per cent).

Half of buy-to-let landlords surveyed said they paid £5,000 or less in mortgage interest a year. There are alternative explanations for the widening gap between new buy-to-let mortgages and the change in the total stock of rental properties. One is that lenders may be choosing to sell their buy-to-let loan books to other companies not accounted for in the UK Finance data. Another is that a wave of individuals have moved their property portfolios into limited company ownership. However, the scale and consistency of the disparity  which has now been widening over three consecutive quarters  suggest a broader trend is at work, Mr Cook said.