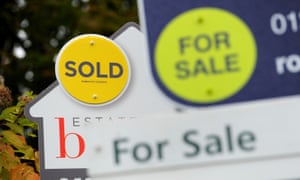 British homeowners have seen the value of their homes rise 30.9% over six years. Photograph: Andrew Matthews/PA

Rightmove is predicting that house prices across England and Wales will rise by 1% in 2018, but there will be a further decline in London.

In its annual report on the market, the property website predicts that 2% price falls in the capital will be more than offset by an increase in the value of small and medium-priced homes around the country.

A 1% average increase would represent the lowest annual increase since the 0.8% rise recorded in 2011, it said.

Analysts at the website, which claims to list 90% of estate agents properties, said they expected the price of properties typically bought by first-time-buyers (two beds or fewer) to increase by 3% next year.

The site also said it also expected second-stepper homes (non-detached homes with three or four bedrooms) to increase by 2% over the next 12 months.

This time last year, Rightmove predicted that national asking prices would rise 2% during 2017. The increase was in fact 1.2%. Its prediction that inner London prices would fall 5% proved more accurate, as they fell 4%.

Mondays report chimes with another from the estate agent Savills, which last month also predicted that average prices would rise 1% next year. It said the UKs housing market had proved stronger than expected this year, rather than stagnating, as the estate agent suggested a year ago.

Miles Shipside, Rightmoves director and housing market analyst, said home owners have had a good run with the national average rise over those six years being 30.9%  equivalent to 4.6% per year.

We estimate that 2018 will continue this years trend by being a real mixed bag of different price pressures, both up and down. The net result is another year of a slowing in the pace of price rises.

He said the peak in the cycle of rising prices was 2015, when annual prices jumped 7.4%. The following year saw price growth more than halve to 3.4%.

Increasingly stretched buyer affordability, exacerbated as intended by tighter lending criteria and increased stamp duty for second home-owners, is taking its toll on upwards price pressure. It is aided by a slowdown in the higher-end markets, with the influence of a readjusting London being a weighty factor on the national averages.

North-east England had the biggest price inflation in 2017, rising by 4.7%. It was also the only region in which prices did not fall in November.

The report shows that Camden was Londons hottest borough, as prices rose more than 19%. Prices in Newham rose 9.8%, the capitals second biggest riser.

In Islington, which is a mile or so away from Camden, prices fell more than 10%. Hammersmith & Fulham was the other London borough that recorded the biggest price fall in 2017, with an identical 10% fall.

Nick Leeming, the chairman of Jackson-Stops, predicted more of the same. The average UK house price will likely remain static across 2018, with punitive stamp duty levels and political and economic uncertainty weighing in on the residential property market. The escalating cost of moving house means home owners are more likely to stay put and renovate next year, when they might otherwise have moved.

Brian Murphy, the head of lending for the Mortgage Advice Bureau, said it was too early to tell if the budget-announced stamp duty exemption for first-time buyers will make as much of an impact as the government hopes.

Last month, Savills predicted that the north-west England is set to experience the fastest price growth in the UK over the next five years: a surge of 18.1%, followed by increases of 17.6% in the north-east and Yorkshire and Humberside region, with 17% growth in Scotland.