There are signs Londons prime property slump is easing

Prime London property has had a tough year, but there are signs that the slump is easing.

The capitals three most expensive boroughs - the City of Westminster, Camden, and Kensington and Chelsea - each saw sales jump by more than 20 per cent in the third quarter, according to a report from LSL Acadata published Monday.

The surge indicates that momentum is returning to prime central London after a year of tumbling property prices. 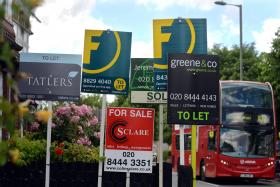 Movement at the top end of the market helps to increase activity all the way down the housing chain, said Acadatas Peter Williams and John Tindale.

Nationally, the report may also be a cause for optimism. While Novembers 0.9 per cent annual gain in prices was the slowest since April 2012, and down from 6.3 per cent a year ago, they increased from the previous month for the first time since March.

The signs of improvement buck a trend of pessimistic reports on housing, particularly regarding London.

A survey by the Royal Institution of Chartered Surveyors last week showed a result consistent with no change in prices, while Rightmove said Londons home values are likely to fall another 2 per cent in 2018.

In the RICS survey, brokers flagged a range of reasons for the stagnation, including Brexit uncertainty, political instability and Novembers interest-rate increase from the Bank of England.

Even in Acadatas report, the picture isnt entirely rosy. Prices in the Greater London area were down 3 per cent from a year ago in October, with the City of Westminster leading losses with an 18.2 per cent drop. Londons market also remains a drag on the UK.

The annual change in prices reported this month would have been 3.3 per cent without the capital and the southeast.