The cheapest house in Ireland. It just needs a roof

Derelict may be an understatement for a 15K Westmeath cottage. But there are others 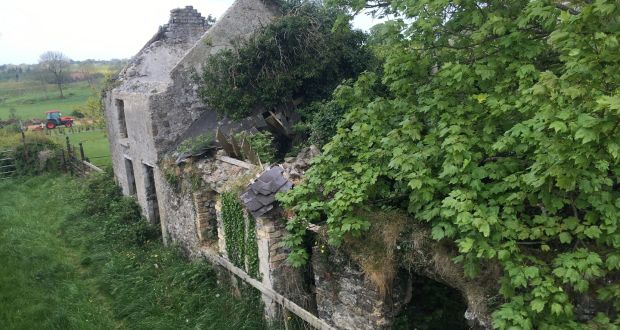 Its been a year of high prices for property but there are cheaper homes for sale, if  not always  in the location or condition youre looking for. And they may not have features like a bathroom, or a roof. There are always buts.

What is the cheapest house in Ireland? A look at myhome.ie gives a taster of whats around at the lower end of the scale.

The cheapest house in Ireland (probably)

Its far from habitable but it is described as a detached house, with one bedroom and one bathroom. The derelict cottage on 0.17 Ha of land is on Main Street in Castletown Geoghegan (it appears to be behind two shops on the main street, with the entrance through a laneway between them).

Castletown Geoghegan looks like an attractive l village and is 12km from Mullingar, 20km from Tullamore and a short drive from Lough Ennell. The agents say it is a most charming location, convenient to a range of services and offering tremendous potential.

Calling it a house is probably a stretch; essentially this is probably a site rather than a doer-upper. It doesnt indicate a Ber and, ahem, there is no list of rooms; peer at the photgraph - its hard to fathom where what could be described as a bathroom might be amidst the large and attractive deciduous tree growing in what may be the sitting room.

The agents says theres an offer of 12,000 on it, so it may go for something above this. It comes with the proviso sold as seen, and from the pictures this does not appear to include a roof.

Cheapest house with a roof

This one has a roof (corrugated metal) and was lived in up to a few years ago. Its a three-bedroom cottage, convenient to Mohill and the N4. It has had some refurbishment but has a way to go (the agents say it requires finishing works). Theres a living room/kitchen with a solid fuel stove, fitted units and stone effect tiles, a sitting room (or a third bedroom; the fireplace opening is closed), and a bathroom. One of the bedrooms is ensuite, and theres rear lobby and an entrance porch. The agents say an offer around 20,000 will secure it, and that a small investment and some TLC would transform it into a cosy residence or indeed holiday home with such an abundance of country walks and a host of natural amenities on its doorstep.

Pro: A possible home or holiday home, with a wee headstart on refurb, for

Con: Still a good bit of work to do, and the Ber rating is G, the lowest on the scale, so that work includes a lot of insulation.

You could just move into this one. A ground floor apartment with one double bedroom, one bathroom and a designated parking space. Built in 2005, its pretty small, around 500 square feet, with gas central heating, a fireplace, double-glazed PVC windows and fitted wardrobes. The sitting room and small kitchen area are open plan. The apartment is close to shops including the local Dunnes Stores. The owners have refused an offer of 104,000, say the agents.

Pro: the fitted kitchen has a cooker, hob, extractor fan and washing machine.

The cheapest 3-bed semi with a garden

This looks like the cheapest in Dublin house with a garden, other than buying through a housing cooperative. The 90m2 three-bedroom family home is in a sought after area in Lusk, say the agents, overlooking a large green.

But, but, but. There are always buts.

This is a pyrite affected property and needs full remediation. This will likely set a buyer back about 25,000 for the work, plus up to another 25,000 for refurbishing afterwards. And because a bank wont cover the mortgage, it will be a cash sale, so it might appeal to a developer, builder or someone who can do the work.

Aside from that, theres a hall, sitting room, kitchen/dining and WC downstairs, with three bedrooms (one en-suite) and bathroom upstairs, plus a south facing garden. Ber is C3. Lusk is an attractive village 23kms from the city, with easy access to Skerries, Swords, Dublin airport, train station, the M1 and M50. Ber is C3.

And the other But: there are already offers on it, bringing it over the asking price. And possibly above being the cheapest semi with a garden in Dublin.

Con: The pyrite issue makes this a different proposition to first appearances.