US House Prices Are Soaring. Here Are the 5 Cities Where They're Rising the Fastest

Such is the state of housing prices in the U.S. that a Harvard University study from over the summer estimated that nearly 39 million Americans cant afford their homes.

Its not hard to see why. Hunger for real estate, along with shortage of supply, sent nationwide housing prices soaring last yearup by 6.3% according to the S&P CoreLogic Case Shiller Home Price Indices.

That pricing growth, however, was not matched by wage growth, which rose about 5.4% in the same period according to data from the Bureau of Labor Statistics. 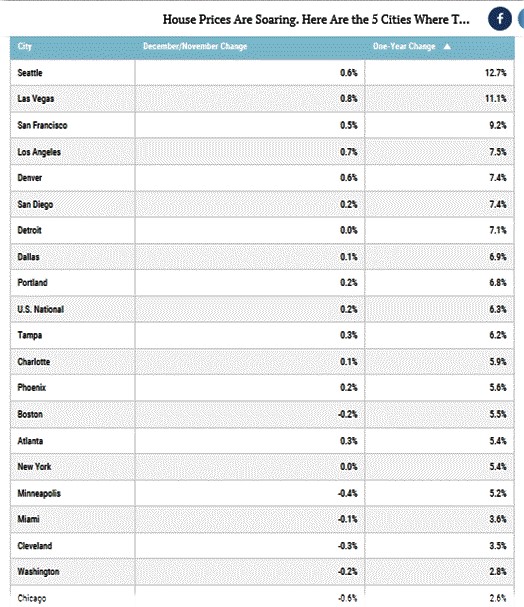 The rise in home prices should be causing the same nervous wonder aimed at the stock market after its recent bout of volatility, says David Blitzer, Managing Director and Chairman of the Index Committee at S&P Dow Jones Indices in a statement.

That divide between wage growth and the jump in housing prices is even more apparent when looking back to the financial crisis. Based on 20 cities covered by S&P Corelogic Case Shiller Home Price Indices, those home values rose an average 62% since financial crisis lows, Blitzer notesoutstripping inflations 12.4% gain in the same period. Wage growth, meanwhile, rose about 27% in the same period.

So where are housing prices growing the fastest? Its mostly in west coast cities. Denver, Los Angeles, San Francisco, Las Vegas, and Seattle were the top in 2017.

Still, there are signs that what Blizter refers to as a housing boom is beginning to flatten.

Within the last few months, there are beginning to be some signs that gains in housing may be leveling off, he said. It is too early to tell if the housing recovery is slowing. If it is, some moderation in price gains could be seen later this year.