@zoesqwilliams
To rejoice in a leave-induced housing crash in the name of socialism is like watching a millionaires house burn down and thinking that its good for equality. Photograph: Bloomberg via Getty Images

Alexa, what is red Brexit? tweeted Aaron Bastani, the founder of the exhilarating Novara Media: the answer was a dramatic fall in London house prices, averages down by over £100,000 in some parts. North-west England, by contrast, is holding up well, with double-digit increases in Blackburn and Warrington, and steady growth in Manchester and Merseyside. This is the great rebalancing weve all been waiting for, the beginning of the end of unaffordability in the capital, the redistribution of asset inflation to the places it has traditionally never reached. Its what the left wanted, and its a consequence of Brexit: ergo, red Brexit, or Lexit if you prefer.

This is what you might call the tiger-riding approach to our national crisis in housing: climb atop a powerful shock and hope it continues to go in your direction. But house-price crashes never do proceed steadily towards equality. There have been four in the UK since the 1970s. They always hit the most buoyant areas first, and those places are always the first to recover. They always have a contagious effect on the economy around them. 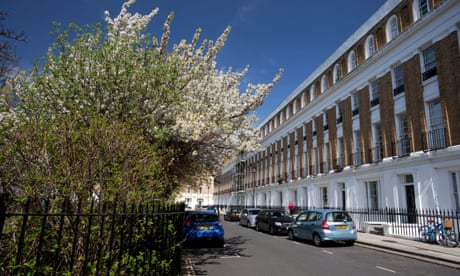 The housing market has been perverted over time by specific and discernible forces: an element of land-banking by developers; a chronic failure of the state to build for the future; and the evolution of housing as an investment, with prices determined not by any notion of value relative to the wages of people who need to live in them, but by how much a lender is prepared to lend. It has become a political platitude to promise to build more, though no one ever does.

The necessary, radical missing question is how money should be created, if not like this. When 85% of all bank lending is on existing residential housing stock, house prices will always over-inflate.

Any serious, structural solution will, without question, have red in it. But red Brexit is not a serious, structural solution. To rejoice in a leave-induced housing crash in the name of socialism is like watching a millionaires house burn down and thinking that its good for equality. Perhaps, if it didnt set fire to any other houses; at a pinch, if he couldnt immediately rebuild his house; but as a general rule, set fire to it is the thing you try last.

The meaning of Brexit ought to be growing clearer, the closer we get to its realisation. What started as a battle of vast concepts  control versus cooperation, sovereignty versus internationalism  should have solidified into something more detailed. Instead, it has remained an abstraction, while the ideas attaching to it become ever wilder. Where once it would deliver £350m a week for the NHS, now it will realise the housing equality dreams of the reds who wanted it all along. The right elides it with the restoration of a hazily defined empire; the left collapses it with the concept of democracy itself.

Vince Cable, leader of the Liberal Democrats, who said this weekend that the vote was driven by nostalgia for a Britain where faces were white, sees the entire caper as racist. His opponents embrace the decision to leave the EU as a victory for the upstanding citizen against everything: liberals, political correctness, experts, bureaucrats, Vince Cables, residents parking bays, hummus.

Every day this project swells to encompass more ambition, more dread, more significance, more destiny, more conceptual certainties, most of which are preposterously contradictory. Once concrete decisions are made, and a roadmap established that a rational person could navigate, the fanciful will slip away. The return of the empire will turn out to mean a trade deal with India a lot like President Macrons. The collapse of house prices and the rentier economy could turn out to be just another painful recession. Taking back control will gradually become more control over some things, less over others. This is at the root of politicians failure to articulate what they want. Its not the internal divisions strangling them; its that any practical move, in any direction, will spell the end of their dreams.

London School of Economics academic Stefan Collignon has drawn some interesting parallels between Brexit and the English civil war, finding cavaliers and leavers in the same places on the map. This has been noted before, roundhead areas becoming, in the fullness of centuries, Labour strongholds; royalists preceding Tory voters. Its only funny now because the leavers are so cavalier.

Yet there is, in the crisis that followed the regicide, some other, elementally recognisable quality of disappointment. It turned out that too much had been loaded upon a king, whether keeping or killing him; that bugbears like popery and radicalism were self-inflating, their danger grew roughly in proportion with how much time you spent worrying about them. The more abstract your politics, the less space it has for the practicalities and compromises wherein solutions are found. Ultimately, debate has to return to the particular and the demonstrable. But if you leave it too long, you end up chopping someones head off.

 Zoe Williams is a Guardian columnist