House prices tumble in London against rises across rest of UK

House prices in London tumbled in March, with the annualised rate of inflation dropping to minus 0.7%, the steepest fall since 2009, according to official Land Registry figures for March.

The falls in the capital contrast with continued rises across the rest of the UK, with the overall rate of house price inflation at 4.2%, with the highest rise in Scotland at 6.7%.

Property experts in London said buyers are sensing blood in the water, with sellers forced to cut prices steeply to ensure a sale. 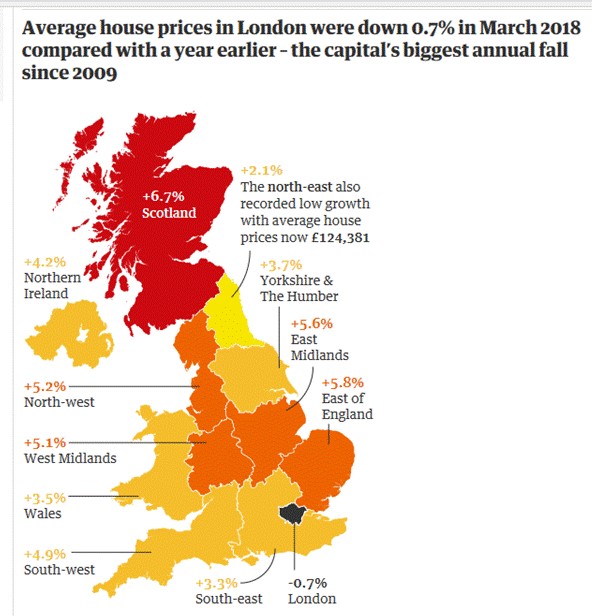 Jonathan Hopper of Garrington Property Finders said: London is paying a painfully high price for its stellar run of price rises and a correction is now under way in several parts of the capital.

The ONS, which compiles the house price index based on Land Registry data, said prices in London have been falling since the EU referendum in June 2016.

It is notable that the 4.2% annualised inflation figure recorded by the ONS is significantly higher than the figures from indices produced by Halifax and Nationwide, which stand at 2.2% and 2.1% respectively.

Land Registry data is regarded as backward looking as it records actual prices paid and then registered, compared to the indices from the lenders, which try to capture price activity at the point of sale.

Separate figures from UK Finance reveal that transaction activity in the capital has declined over the past year. The number of first-time buyers fell by 3% while the number of home movers dropped by 4.3% in the first quarter of 2018, compared with the same period a year earlier.

Sign up to the daily Business Today email or follow Guardian Business on Twitter at @BusinessDesk
However, Sam Mitchell of estate agency HouseSimple.com said the picture outside London is very different.

Guardian Today: the headlines, the analysis, the debate - sent direct to you
Read more

For years we have talked about the north-south divide, with house prices in the north struggling to keep pace with booming price growth in the south. But that trend has been turned on its head, Mitchell said.
Compare London to Liverpool. While London house prices are in negative growth territory, in Liverpool, average prices are up 12.5% over the same period, making it one of the strongest property markets in the UK right now. Where affordability has been a major problem in the south of England, the north offers value, particularly for families looking for larger homes.

Economists expect house price inflation to be around 2% in 2018, with some pencilling in only a modest recovery in 2019.