Mark Carney DOOMSDAY scenario: No deal Brexit could cause house prices to PLUMMET by THIRD

MARK Carney warned the Bank of England has run a stress test on the what the UK financial system could withstand and it included a dramatic drop in house prices.

Mark Carney: No deal Brexit could cause house prices to fall 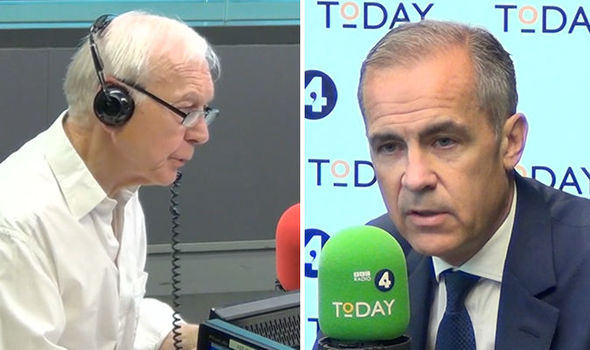 The Bank of England Governor believes the financial system will be prepared for the undesirable no deal Brexit.

He said: The financial system will be ready for the undesirable and still unlikely possibility.
We ran the system through a stress test which had real estate prices going down by more than a third, house prices and commercial real estate, interest rates going up by almost four percentage points, unemployment going to nine percent and the economy going into a four percent recession.
He reiterated that this was not a prediction of what could happen if there was no Brexit deal, but to provide an idea of what the system could withstand.

UK should WALK AWAY from EU! Academic celebrates Brexit no deal chance

Mr Carney said: "We have been planning for very difficult circumstances and the banks are ready.

"When you adjust for the stimulus we've given, the stimulus the Government has given and the strength of the global economy, it's about 1.75 or two percentage points lower than it otherwise would have been - that's our projection on projection estimate. That is a big difference.

"So we've gone from the fastest to the slowest growing in the G7, we've had a big shift in sterling - 17 percentage points - and we went through the latter half of 2016 and last year with a real pay squeeze on British households, which we're just getting out of."

The BBC host, John Humphrys, put the Foreign Secretarys comments this week to Mr Carney about the UK slipping into a no-deal Brexit by accident.

Mr Carney said: I think the possibility of a no-deal is uncomfortably high at this point.

A moment ago, I gave you a glass half full representation of where competition should go in banking.
This other half of the bank is entirely glass half empty all of the time.

Our job is to look at what could go wrong. What are the outcomes that could happen and what could we do to make sure the financial system is in a robust position so that it lessens the impact of a bad deal, in this case, a no-deal Brexit.

Mr Carney also said a no-deal Brexit was highly undesirable as he warned both the UK and EU to avoid it. The pound weakened below $1.30 as he spoke and was down 0.3 percent at $1.2982 as of 8:56am.
The BBC host Humphrys stepped in again claiming the Bank of England Governor was saying a no deal Brexit would be a disaster.

Mr Carney replied: It is highly undesirable. Parties should do all they can to avoid it.
The BoE chief's comments sparked a furious response from experts.

David Lamb, head of dealing at Fexco Corporate Payments, said: The Governor giveth and he taketh away. But this week he has mostly taken away.

Less than 24 hours after announcing the Bank of Englands rate-setting committee had voted unanimously for an interest rate rise, Mark Carney has pulled the rug from under sterling.

The Governors early morning interview on BBC radio sent warnings flashing round the currency markets, and the Pound quickly crashed below $1.30 in response.

Mr Carney revealed himself to be deeply bearish about Brexit and intensely dovish about the future course of interest rates.