Average price of a home in the capital is £468,544, more than twice national average
Angela Monaghan 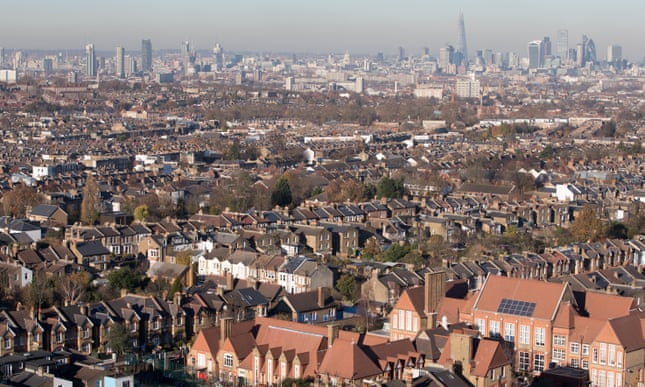 House prices in London have fallen for the fifth quarter in a row as high prices, stamp duty changes and Brexit uncertainty put off buyers.

The average price of a home in the capital fell by 0.7% in the third quarter, compared with the same period last year, to £468,544, according to Nationwide. It followed a 1.9% drop in prices in the second quarter.
Despite the fall, London remains the most expensive place to buy a property by some margin, with average prices more than twice the national average of £216,103.

London has become a weak spot in the UK property market, with many homebuyers unable to afford a house after a run of strong price rises.

Should I wait to buy because Brexit might make house prices fall?

Meanwhile, a higher rate of stamp duty on second homes has affected buyer appetite in London. And international buyers traditionally attracted by the London property market are being deterred by uncertainty surrounding Brexit negotiations, according to analysts.

Robert Gardner, Nationwides chief economist, said that after a long period where prices rose faster in London than elsewhere in the UK, a period of under-performance was to be expected.

When you look at the affordability measures, such as house prices versus earnings, they look quite stretched in London compared with other parts of the country, he said.

Despite the falls in London, property prices in the capital are only 3% below the record highs achieved in early 2017, and are still 50% higher than they were in 2007 before the financial crisis.

On a monthly basis, house prices across the whole of the UK edged up 0.3% in September, to an average of £214,922, following the sharpest monthly fall in six years in August. It left the annual rate of growth flat at 2%. Nationwide expects prices to rise by about 1% overall in 2018, compared with 2.6% last year.

Sign up to the daily Business Today email or follow Guardian Business on Twitter at @BusinessDesk
Much will depend on how broader economic conditions evolve, especially in the labour market, but also with respect to interest rates, Gardner said.

Subdued economic activity and ongoing pressure on household budgets is likely to continue to exert a modest drag on housing market activity and house price growth this year, though borrowing costs are likely to remain low.

The Bank of England raised interest rates in August for only the second time since the financial crisis, to 0.75%. Nationwide said most mortgage holders were on fixed-rate deals and therefore unaffected by rate increases. For those mortgage holders on standard variable rates, a 0.25-point rise in rates would increase average monthly payments by £16, which most households could afford, the lender said.