House prices Brexit: How leaving the EU will affect your house price


THE BREXIT deadline of 29 March is fast approaching, and home owners are beginning to worry how leaving the European Union will have an impact on house prices  amongst other things.

Britain will officially begin its separation from the European Union on 29 March.

As business owners express concern about how the decision will change their trade operations, there are also concerns about travel and immigration.

And another concern growing among home owners and first-time buyers is how Brexit will affect house prices and the housing market as a whole.

While many may be preparing for a housing market crash, it seems the reality will be far from it.

"There are still two routes we can take when it comes to Brexit  deal or no deal  and each of these could have a different impact on the housing market
Jonathan Stephens, MD of Surrender Invest"

In fact, the changes we see might not be as extreme as first thought.

Jonathan Stephens, MD of Surrenden Invest shared his expert opinion on the situation, highlighting some positive aspects which are likely to come out of Brexit  specifically foreign investment into the UK housing market.

He told Express.co.uk: There was much talk around the time of the Brexit referendum that a vote to leave Europe would trigger a housing market crash. Thankfully, the countrys housing market is not so quick to react as its stock exchange or currency.

However, as we approach the 29 March deadline, the market is beginning to respond to the UKs decision to leave the EU. Weve already seen indications that prices in London and the South East are beginning to dip, which is likely to continue as buyers finally let their pre-Brexit jitters play out.
Jonathan explained whatever the outcome with Theresa Mays Brexit deal, either direction will likely see a slowing of the market.

He continued: There are still two routes we can take when it comes to Brexit  deal or no deal  and each of these could have a different impact on the housing market. 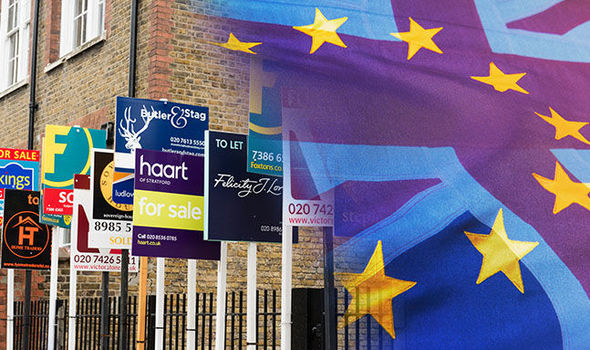 Brexit isn't expected to have a drastic change on the housing market (Image: GETTY)

In either scenario, what we are likely to see after March is a slowing of the market in other areas of the country, as London and the South East often lead the way when it comes to house price trends.

However, I dont anticipate any kind of immediate large-scale fall in prices  more a softening of the market as buyers hold their collective breath. The transition period, from March to December 2020, is key here.

Jonathan also explained how its more likely other economic factors would have an influence on house prices, as opposed to Brexit alone.

As we slowly disengage from the EU, its possible that wider economic factors could influence house prices, with key trade deals (for example) impacting on house buyers general sense of confidence.
We are likely to see a temporary drop in the pound, which could spur foreign investment in the housing market which Jonathan claims could keep the market steady until UK buyers confidence is increased.
Related articles

The housing market may soften after Brexit (Image: GETTY)

The investment expert continued: What I do think well see come 29 March is another slight drop in the value of the pound.

Although this may affect domestic buyers confidence temporarily, it would at the same time by likely to spur foreign investment in the UK housing market. This should help to keep the market buoyant until UK buyers confidence  and the value of the pound  recovers.

It will take time for the UK to adjust to life outside of the EU, but EU leaders have insisted they want to continue working with the UK to minimise negative impacts.

Jonathan added: EU leaders have made it clear that they want to work as closely as possible with the UK in future.

Both Europe and the UK will take time to adjust to the new reality of Brexit, but all those in power will be working together to ensure that any negative impacts are minimised, which should hopefully help to protect the UK housing market from reacting too negatively.