Designs on Property tracks and summarises the property indices. Kate Faulkner says: Year-on-year, demand in the UK has fallen by 19 per cent, as buyers hold off on making any decisions, in light of the current political climate. 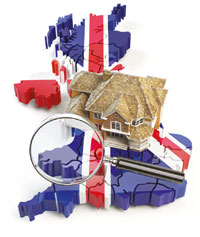 Home.co.uk: Prices move into the red after notching up 87 months of growth.

Key facts
Average prices across the indices vary from mortgaged-only prices from the Nationwide HPI (Feb 19) of £211,304, through to marketing prices (ie not necessarily sold) from Rightmove (Feb 19) of £300,715 and actual prices from LSL Acadata HPI of £306,647 (Dec 18). Average sold prices from the UK HPI stand at £230,776 (Dec 18). There is a 45 per cent difference between the highest average price from LSL which include cash sales and the lowest from Nationwide which reflect mortgaged homes.

Kate says: For the property market to keep going ideally we need the annual rate of property price growth to lag behind wage growth. This hasnt been something weve experienced, since the credit crunch, bar the last year or two in London, the South and East Anglia.

However, with affordability in these areas hitting the buffers and even though property prices are still rising in most of the Midlands/North, Wales, Scotland and Northern Ireland, according to Rightmove, annual wage growth of 3.4 per cent is now outstripping asking prices at the fastest rate since 2011, improving buyer affordability.
Mortgage rates are still incredibly competitive but buying a home can still make sense  even if people are still having Brexit worries.

Nick Leeming from Jackson-Stops believes that if you add to this a limited supply of stock coming to the market, so if a property ticks all of the boxes in terms of price, location, access  to key amenities and good transport links, we would advise them to really consider purchasing the home.

And with short and long term mortgage rates incredibly competitive buying a home can still make sense  even if people are worried about what will happen post Brexit.

However, data suggests that cashflow for agents and other property companies is getting tougher with Home.co.uks time on the market analysis suggesting the South East is taking 38 per cent longer to sell, the East of England 46 per cent. Hometrack reports weak markets in Aberdeen, Inner London and Newcastle. However in Nottingham, Glasgow and Edinburgh, market dynamics remain fairly strong.
Country and regional differences

From a country perspective, Northern Ireland leads with prices up 5.5 per cent year on year and volumes up for the first half of 2018 by 108 per cent versus the disastrous year of 2009. However its only really the current and recent market that is looking good. For those that bought at the height of the market, prices for some will still be around 40 per cent lower than they bought them for.

Kate says: Regionally, the property market from a price perspective is all over the place. London managed 4-5 per cent annual growth since 2005, while the North East is hardly seeing any growth at all. Year on year prices are down by one per cent and longterm growth either non-existent or seeing slight falls.

Although we are used to a ripple effect for price growth, with London leading the way up or down and the rest of the country following, this doesnt seem to be the case in the new, localised property world we are now living in.

RICS: London and the South East continue to display the weakest price indicator readings, while pricing sentiment also remains negative in East Anglia and the South West. In each instance, strong price growth over the past six years as a whole has left measures of affordability looking stretched, with high prices therefore a key factor hampering demand at present. Elsewhere, although house price inflation seems to have lost at least some impetus in most English regions over the past six months or so, prices continue to rise firmly in Northern Ireland and Scotland.

Kate says: With differing performance by country and region, its no surprise that when it comes to towns and cities, property prices are performing vastly differently too  as are transactions. Leicester is the top city performer according to Hometrack, with Aberdeen continuing to see poor performance as the economy is badly affected by low oil prices. The next big faller should, in theory at least, be Swindon, but this will depend on how much the news about Honda impacts on the community. In Belfast, Leicester, Liverpool, Edinburgh and Sheffield, prices and markets are still buoyant, while Cambridge, Oxford, Milton Keynes, London and Reading are seeing small rises or falls.

NAEA Propertymark: The average number of sales agreed per branch increased from five in December to seven in January. The percentage of properties sold to FTBs increased for the second month running, rising from 23 per cent in November to 24 per cent in December, and to 26 per cent in January. This is the highest recorded since July 2018, when 30 per cent of sales were made to the group.
Bank of England: Mortgage approvals for house purchase (an indicator of future lending) increased in January to 66,800, slightly above the average of the previous six months of 65,500. Approvals for remortgaging ticked-up to 50,400, marginally higher that the recent average of 48,900.

Kate says: According to the NAEA, In January, the number of house hunters registered per estate agent branch fell from 304 in December, to 297. Meanwhile, year-on-year, demand has fallen by a fifth (19 per cent), from 367 in January 2018, as buyers hold off on making any decisions, in light of the current political climate. Supply of housing fell by 14 per cent in January, from 42 in December to 36 per member branch. What is incredible is to see how fast transactions have slowed either because an area has out grown affordability or because the fear of Brexit has kicked in, encouraging people to to wait and see.
Alongside weakening demand, the flow of properties listing on the sales market also deteriorated, with the net balance reading of -25% the poorest since July 2016.

RICS: During January, new buyer enquiries fell again at the headline level (seasonally adjusted), marking the sixth successive monthly decline. Demand softened to some degree across virtually all parts of the UK. Scotland was a slight exception, but even here the trend was only flat. Alongside weakening demand, the flow of properties being listed on the sales market also deteriorated, with the net balance reading of -25 per cent the poorest since July 2016. Moreover, the pipeline for sales instructions going forward still appears weak, evidenced by survey participants continuing to report the number of appraisals being down on an annual comparison. Rounding off a subdued month for market activity, agreed sales also fell further, with the pace of decline seemingly gathering momentum compared to the December results. The average time taken to sell a property, from listing to completion, continued to lengthen, reaching 19.4 weeks.
NAEA Propertymark: The number of house hunters registered per estate agent branch fell from 304 in December, to 297 in January. Looking at a year-on-year comparison, demand has fallen by a fifth (19 per cent) from 367 in January 2018.

Are volumes heading back to 2009 levels?

Normally in the property market, if volumes fall, then price falls will quickly follow. During the credit crunch we saw volumes slip back by 50 per cent, on average, while property prices fell by around 20 per cent  although some areas performed worse and others better. In some recent market presentations I was surprised to see how far transactions had fallen back versus previous years and I even spotted that in some areas, based on Land Registry data comparing volumes from January to October 2009 versus 2018, some transactions had fallen back as far as levels experienced in 2009.

I then thought Id take a look at how volumes had performed for all the towns and cities I track each month to see if there was still a relationship between falls in transactions and property price falls and, if the impact was as severe as the credit crunch.

In theory, this relationship should hold, but the big difference is we dont have the lack of finance and I wondered how much of a difference this would make.

Having looked at the data, Liverpool is currently topping the charts, with transactions 105 per cent higher than they were in 2009, closely followed by Peterborough which has 74 per cent more sales than 2009 and the likes of Edinburgh, Bradford, Birmingham, Lincoln, Nottingham, Sheffield and Leeds all seeing 50-55 per cent growth.

Typically, but not in every case, these areas are also buoyant from an annual property price growth rate, with Liverpool, Edinburgh and Sheffield showing price growth of over seven per cent, but interestingly its not a given, with Bradford and Leeds prices only up by 3.2 per cent and 3.6 per cent respectively year on year.

The relationship also seems to be different for those areas which have fallen back to 2009 levels  and in some cases even further. For example, Oxford transactions are 21 per cent lower than 2009 and between 2007/8 and 2009, prices had fallen by 23 per cent.

However, prices arent falling at anywhere near the amount they did during the recession, with Oxford prices showing a small increase year on year.

So the relationship between transactions falling and property prices following doesnt seem to be holding  which on one hand is good news in that no-one is panicking and that gives the market a chance to recover, albeit the fall in transactions can seriously impact property companies.

Having said this, one of the drawbacks of Land Registry data is that it takes a long time to come through. This does leave an opportunity for savvy agents, legal and other local property companies to generate some interesting and more up to date PR than its possible to secure from general data.