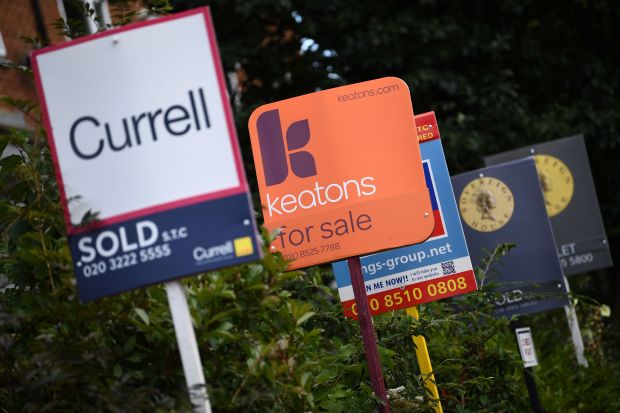 AVERAGE house prices have soared to £309,399 in February following a post-Brexit boom in the market, according to Rightmove.

House prices have jumped again this month following BrexitCredit: AFP - Getty
It means that house prices are now just £40 short of a the record high set in June 2018, when they were £309,439.

The housing market had stalled caused by a string of delays to Britain's departure from the European Union and an indecisive government.

But a Conservative majority and a Brexit deal in place appears to have boosted confidence from sellers.
Rightmove is among other property listing services to received a spike in websites hits, with more than 152 visitors in January.

It added that new house price records could be set in the coming months, dubbed the "spring moving season", when house buying typically peaks

.
What help is out there for first-time buyers?

GETTING on the property ladder can feel like a daunting task but there are schemes out there to help first-time buyers have their own home.

Help to Buy Isa - It's a tax-free savings account where for every £200 you save, the Government will add an extra £50. But there's a maximum limit of £3,000 which is paid to your solicitor when you move. These accounts have now closed to new applicants but those who already hold one have until November 2029 to use it.

Help to Buy equity loan - The Government will lend you up to 20 per cent of the home's value - or 40 per cent in London - after you've put down a five per cent deposit. The loan is on top of a normal mortgage but it can only be used to buy a new build property.

Lifetime Isa - This is another Government scheme that gives anyone aged 18 to 39 the chance to save tax-free and get a bonus of up to £32,000 towards their first home. You can save up to £4,000 a year and the Government will add 25 per cent on top.

"First dibs" in London - London Mayor Sadiq Khan is working on a scheme that will restrict sales of all new-build homes in the capital up to £350,000 to UK buyers for three months before any overseas marketing can take place.

Starter Home Initiative - A Government scheme that will see 200,000 new-build homes in England sold to first-time buyers with a 20 per cent discount by 2020. To receive updates on the progress of these homes you can register your interest on the Starter Homes website.

The experts also feel that prices will continue to rise as the number of buyers continues to outstrip the number of properties on the market.

Rightmove director Miles Shipside said: "Buyers who had been hesitating and waiting for the greater political certainty following the election outcome may be paying a higher price, but they can now jump into the spring market with renewed confidence.

"After three and-a-half years of Brexit uncertainty, dither and delay, many now seem to have the 2020 vision that this is the year to satisfy their pent-up housing needs."

Edward Heaton, founder and managing partner of Heaton & Partners, said: "The hype of a 'Boris bounce' - which was building for some time - immediately reinvigorated many of our clients' purchasing plans."
House prices surged by 2.3 per cent following Boris Johnson's election win, jumping by £6,785.

Nationally, there are still more buyers than sellers although this figure did jump by 2.1 per cent compared with a year ago - the first rise in new supply for 13 months.

Mr Shipside continued: "Owners coming to market this spring face the best selling prospects for several years, with good demand for the right properties at the right prices.