The U.K. housing market gained momentum in July after Chancellor of the Exchequer Rishi Sunak announced a stamp duty holiday, but the improvement is expected to be short-lived and some real estate agents are warning of a possible slump as government support for the economy is withdrawn.

New buyers flooded the market and house prices rose in every region bar London, with a key index of values turning positive for the first time since March, the Royal Institution of Chartered Surveyors said Thursday.

The boost reflects a rush to snap up homes since Sunak temporarily raised the threshold for paying stamp duty, a home-buying tax, to 500,000 pounds ($653,000) as part of a package of measures to support jobs and the economy. The tax cut, which runs until March 31, saves someone purchasing a property up to 15,000 pounds.

But RICS warned the outlook beyond the next three months is less bright, with the economy in recession and the government gradually withdrawing support programs that have kept businesses afloat and millions of people in employment.

There remains rather more caution about the medium-term outlook with the macro environment, job losses and the ending or tapering of government support measures for the sector expected to take their toll, said Simon Rubinsohn, RICSs chief economist. Significantly, some contributors are now even referencing the possibility of a boom followed by a bust.

That view was reinforced in a separate report from the Resolution Foundation, which predicted house prices could fall as much as 22% over the next year.

The reports come in a week when a slew of economic releases has revealed the scale of the pandemics toll on the economy. Gross domestic product plunged over 20% in the second quarter, while almost 750,000 people have lost gainful employment since March. 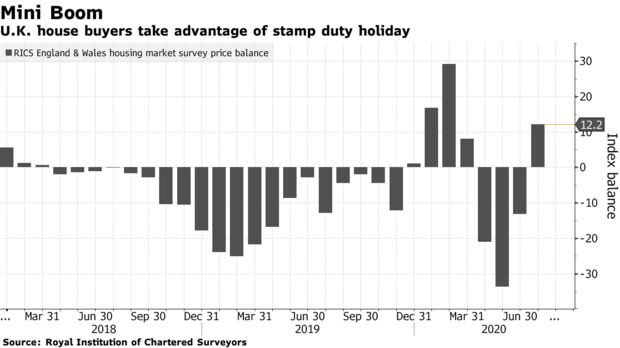