HOUSE ABOUT IT Stamp duty cut hikes average property prices by £30,000 as sales rise by 20 per cent

A STAMP duty break has added £30,000 to average property prices and sales have soared by 20 per cent, according to the Bank of England. 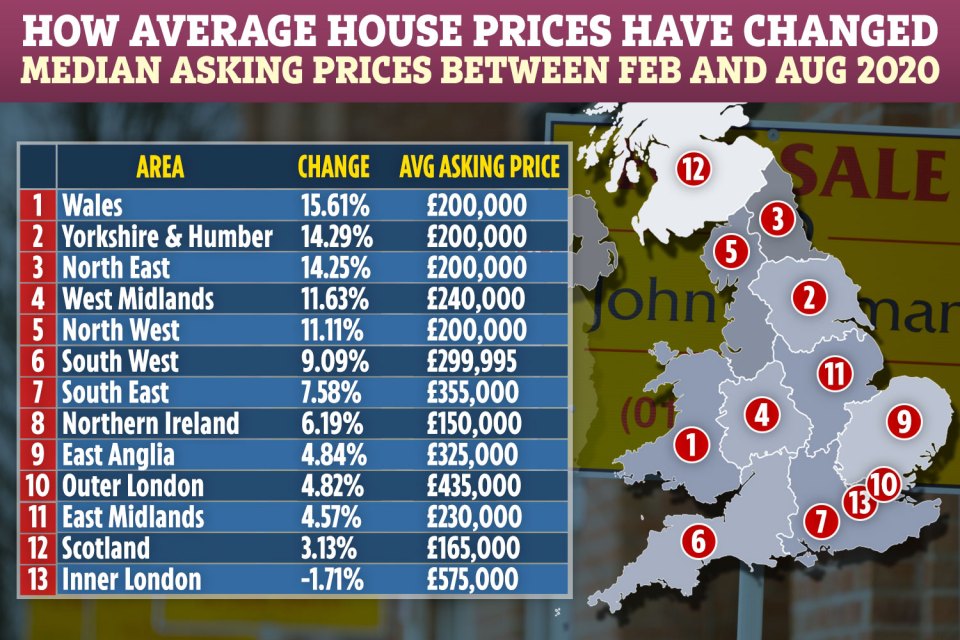 How house prices have changed according to Twenty Ci

Buyers have until March 31 2021 to complete on their purchase in order to benefit from the Chancellor's tax holiday.

Rishi Sunak raised the stamp duty threshold from £125,000 a year to £500,000 a year in England and Northern Ireland on July 8, to boost the economy through the housing market.

Since then, thousands more house sales have gone through compared to in the weeks before the coronavirus lockdown.

What is stamp duty?

STAMP duty land tax (SDLT) is a lump sum payment anyone buying a property or piece of land over a certain price has to pay.

Up until July 8, most house-buyers in England and Northern Ireland had to pay stamp duty on properties over £125,000.This was temporarily increased to £500,000 until March 31, 2021 in the government's mini-Budget in July 2020. The rate a buyer has to fork out varies depending on the price and type of property.Rates are different depending on whether it is residential, a second home or buy-to-let, or whether you're a first-time buyer.The usual system in England for residential properties means:

Figures from house price data firm Twenty Ci shows how the relief has pushed up house prices particularly in the north of England and Wales.

In Wales, median house prices have risen by 15.61 per cent and 14.29 per cent in Yorkshire and the Humber.

Central London is the only area in the UK where house prices have dropped, by 1.7 per cent, over the past few months.

Halifax's price index also showed that the relief has pushed up prices but not by as much.

But experts have warned that the property market could crash by the end of the year, putting the sudden surge in sales down to delays from lockdown.

Pablo Shah, a senior economist at the Centre for Economics and Business Research, told The Times that the research group expected the number of property sales to rise by 6 per cent.

He said: "The stamp duty cut is propping up the market this summer but it won't be sufficient to negate the effect of the end of the furlough scheme and mortgage payment deferrals later this year which is why we still believe that property prices will fall towards the end of the year and into next year."

The stamp duty cut could save buyers thousands of pounds in tax but critics have warned the tax break could push up prices as buyers now have more cash to compete with others to secure deals.

The Office for Budget Responsibility (OBR) expects property prices to rise by 0.5 per cent due to the tax break, but a 6.4 per cent fall by the end of 2020.

The property market almost slowed to a standstill back in March during the coronavirus lockdown.

House prices fell by 0.3 per cent in March, and again by 0.6 per cent in April as the UK shutdown to slow the spread of the coronavirus.

In May, they dropped again by 0.2 per cent according to the index, and stayed the same in June.

MOST READ IN MONEY

SHUTTING SHOP?Debenhams 'draws up liquidation plans' which could put 14k jobs at risk

TECH IT HOMEHow to WIN an epic tech bundle worth £3,500 with Sun Savers and Sun Win

IN FOR A POUNDRare 'double strike' £1 coin sells on eBay for £282 - check your change now
But not everyone will be able to make the most of the property perk - rising house price may leave first-time buyers locked out of the market.

Many first-time buyers and second steppers may struggle to secure a mortgage for a more expensive property as lenders tighten their belts while mass redundancies are still a threat.

We've put together a guide to how first-time buyers can still purchase a home even though homeownership is "getting harder".