House prices jumped to a new record high in June as the housing market reopened and pent-up demand for homes was released after the Covid lockdown, official figures released today have confirmed.

The official June data for house prices confirms the UK property mini-boom, driven mainly at that time by transactions that were resumed after being put on hold by the pandemic. 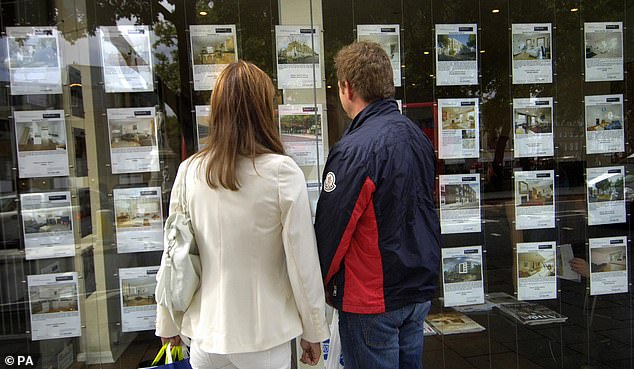 June house price rise was driven by buyers resuming purchases put on hold due to the pandemic, according to the latest house price index by ONS and Land Registry

June figures reflect mostly offers made and accepted in late March and April, when estate agents had to shut down shop due to the lockdown but were then allowed to reopen, at least in England, from 13 May.

'The increase in prices in June 2020 may reflect some degree of pent-up demand following the easing of lockdown restrictions, particularly at the higher end of the price scale,' the report says.

Shaun Church, Director at mortgage broker at Private Finance, says the figures reveal the scale of the impact that the 'sudden burst' in pent-up demand had on house prices following the reopening of the property market.

'Price rises were driven by a flood of buyers resuming purchases put on hold during lockdown immediately after restrictions were eased,' he said.

But the report also cautioned that the impact of coronavirus on house sales - which hit rock bottom during lockdown and are still below pre-Covid levels - means larger revisions may need to be made to the house price index estimates than usual.

The Land Registry and ONS have only recently started publishing their index after suspending it in May due to the difficulty to gather accurate sales data for the lockdown months.

House transactions in England increased by 28 per cent between May and June, but at 61,780, they were still 37 per cent below the level in June a year ago, according to the latest seasonally adjusted figures by HMRC.

Anthony Codling, chief executive of property platform twindig, said we should pay more attention to transactions, than house prices, to have a clear idea of where the market is heading.

Jamie Durham, an economist at PwC, said: 'As the index captures transactions that completed in June, it is likely many of the sales were agreed prior to lockdown, however the proportion of sales agreed after lockdown will be increasing.'

The official data confirms what other surveys have already said, with the rise in prices looking to have continued throughout the summer months, as shown by surveys from Halifax and Nationwide.

However, there seem to be agreement among commentators that the spike in prices is unlikely to last, with economists at Cebr forecasting a 14 per cent fall in prices next year when the stamp duty holiday comes to an end and job losses rise further. 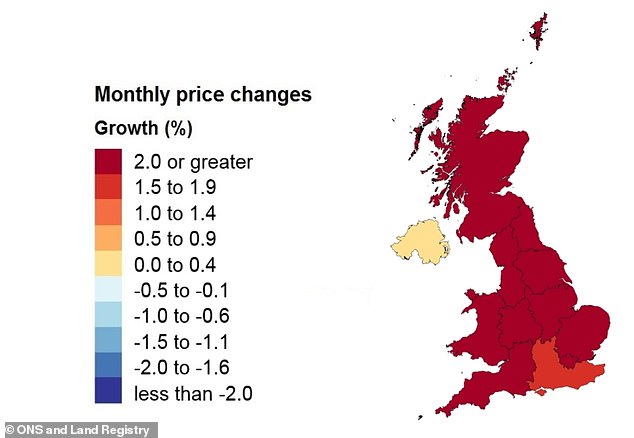 Most regions saw strong house price growth in June, according to the latest official data

House price growth of more than 4% in many regions

House price growth was strong across the country, with five of the nine English regions posting annual price rises of more than 4 per cent.

Prices in London rose by 4.2 per cent on an annual basis, a strong growth after the capital saw a period of relative weakness since the Brexit referendum. 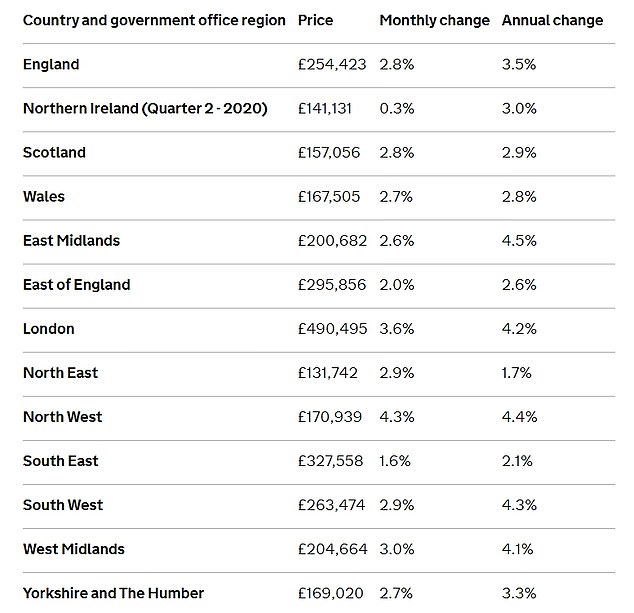 Terraced and semi-detached houses saw the biggest price growth, up 4.2 per cent and 4.1 per cent respectiveley. In comparison, flats prices rose just 0.9 per cent.

According to Anna Clare Harper, author of Strategic Property Investing, this is a result of the new, post-Covid trends seeing people look for larger and greener spaces spaces.

'Housing market performance in June feels like distant history but tells an interesting tale based on changing tastes and preferences,' she says.

'This is unsurprising: qualitative and quantitative data point towards people wanting more space, particularly outside,' she adds. 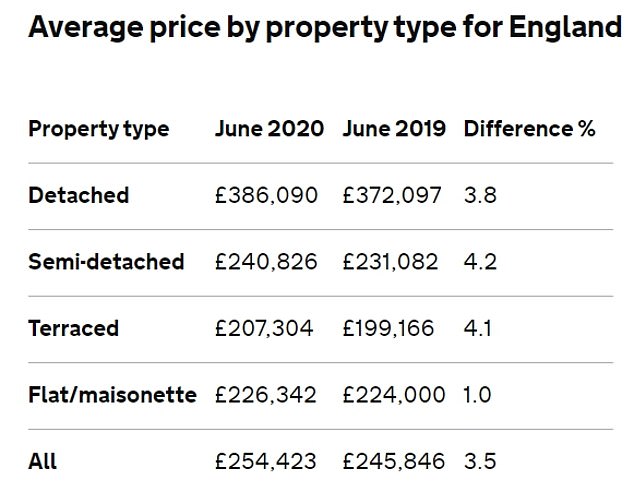