House prices will fall by almost 14 per cent next year when the stamp duty holiday comes to an end and job losses rise further, a think-tank has warned.

Economists at the the Centre for Economics and Business Research made the gloomy prediction that a slump will follow the current mini-boom, with pent-up demand that built during the lockdown freeze waning in the run-up to the tax cut deadline.

This has added fuel to a property market mini-boom, even as the UK fell into its deepest recession on record in the second quarter, with house prices rising to fresh record highs. 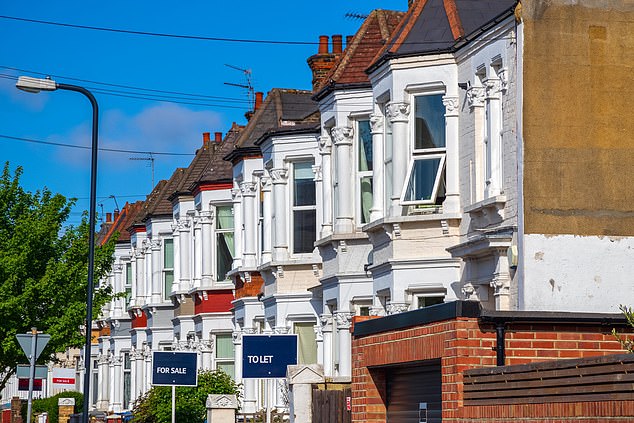 Heading for a crash: House prices are forecast to fall 14% next year after the current mini-boom

The Cebr said this is down to 'transitory' Government policies and factors which are giving the housing market a temporary boost. Once these fade away, it forecasts that prices will fall heavily.

It said that despite the recent uptick in prices, property values are set to start falling 'significantly' towards the end of the year, with average prices forecast to be 13.8 per cent lower in 2021 than in 2020.

That forecast comes despite house prices shooting up 5.2 per cent in the year to August to reach a record £245,747, according to Halifax, Britain's biggest mortgage lender. The bank has also warned that the spike in prices was 'highly unlikely' to last.

'This is at odds with the wider economic turmoil, with the UK still in the early stages of rebuilding from the most severe contraction in economic activity on record.'

The stamp duty cut recently introduced by the Government, which delivers a potential £15,000 tax bill saving to those buying homes costing £500,000 or more, is one of the factors causing this anomaly, according to Cebr.

The temporary policy is pushing prices and transactions higher as people rush to complete transactions before it comes to an end on the 31 March next year. But it will likely depress them next year when it ends and more people lose their jobs.

'We at Cebr estimate that July's stamp duty cut will bring about a 1.2 per cent increase in average prices and a 6 per cent rise in the number of transactions compared with what otherwise might have happened,' the think-tank said.

'The temporary nature of the tax reduction means that the policy's short term effects could be even more dramatic, as people rush to complete transactions before the return to the previous stamp duty regime at the end of March 2021.'

Movements: House price fluctuations in the UK over the last year, according to Halifax

Pent-up demand from the period of lockdown, when viewings were banned, is also currently flooding the market.

The Cebr estimates that nearly 150,000 house sales were delayed due to the lockdown.

It said: 'This shows the amount of pent-up demand built up during the lockdown. While this will to some extent have been matched by pent-up supply, data from RICS suggests that buyers have returned to the market more quickly than sellers, boosting prices.'

Costly: The average cost of a home in Britain has risen to £224,123, Nationwide reported 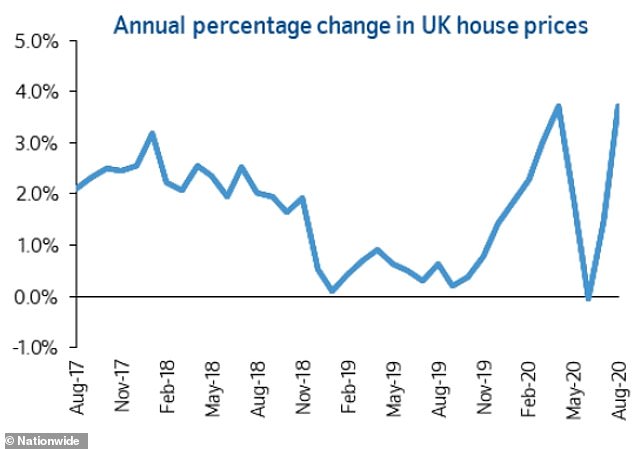 Just 161 mortgage repossession claims were issued in the second quarter - a much smaller number than the average 2,000 during a typical quarter.

'The suspension of forced sales and repossessions will have had some supply side impacts on the overall housing market throughout the second and third quarters, boosting prices as well,' Cebr said.

On top of that, the Government's Coronavirus Job Retention Scheme has helped by limiting the number of people losing their jobs, but this is set to change when it comes to an end on October 31.

'Our analysis suggests that prices will start to fall significantly towards the end of the year and the first half of 2021 (though there might be a short spike as the stamp duty reduction comes to an end), with average house prices forecast to be 13.8 per cent lower in 2021 than in 2020,' Cebr said.