· Live in a multi-generation family home, particularly if this is in cramped living conditions

· Work in the service sector that has direct interfaces with the general public or work in very close proximity to other people (e.g. meat packing factories)

· If you work indoors

· If you mix with different types of people indoors

· If you dont wear a face mask

· If you dont wear glasses (it is thought the virus might enter via the moisture in the eyes  and by wearing glasses you are also far less likely to rub your fingers with the virus on it, into your eyes and thence transferring into your body)

· You are young and socially mix with many other people and households  either at School, College or University  or socially in cafes/bars etc

· If you dont regularly wash your hands

· If you shout, sing or talk loud or are next to someone that does this also  this encourages spit, and droplets of moisture in the air to travel  over large distances from your mouth to other people 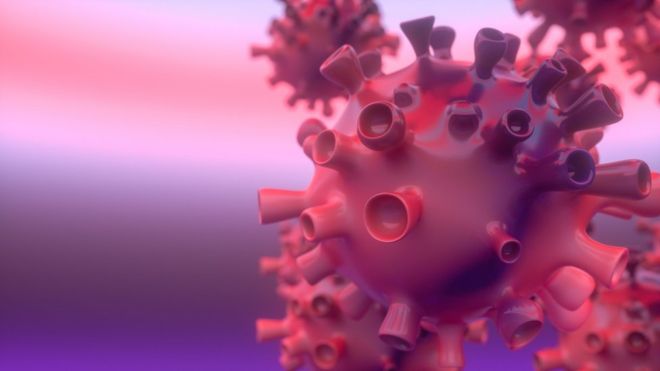 · Humidity  the virus prefers dry climates  it is thought the virus can get deep into the lungs by circulating in dry climates and entering any enflamed parts of your lungs that might have been enflamed by very dry cold air, pollution or an existing cold-bronchial-coughing condition

· Ventilation  the virus thrives in poorly ventilated rooms or buildings 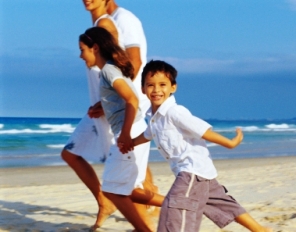 Those Affected: With schools opening and Universities starting back-up again  it will be difficult to stop young people from mixing and spreading COVID-19 around  nothing new. Young people are far less likely to be severely affected by the symptoms and many may be asymptomatic. It does seem that the elderly and more vulnerable people are being particularly careful and avoiding contact with younger people that might be carriers of the virus. This is easier to maintain in middle class and wealthy households that have larger homes or more homes  where people are not living in cramped conditions and/or multi-generational households. These more wealthy elderly people are likely to be living along or with one other in a large house  this reduces risks dramatically  such people will have almost no contact with young people. This might be a key reason why deaths in places like Leicester, Bolton, Oldham and Bury are high  from poorer multi-generational households with elderly people being more affected. And deaths are so low in places like Beaconfield, Newbury and prosperous middle class southern towns that have many elderly people living along in large houses. 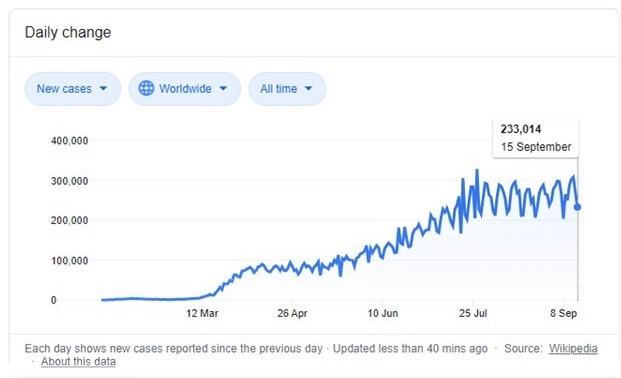 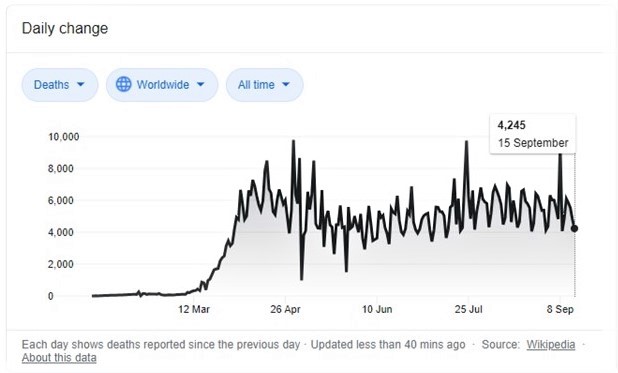 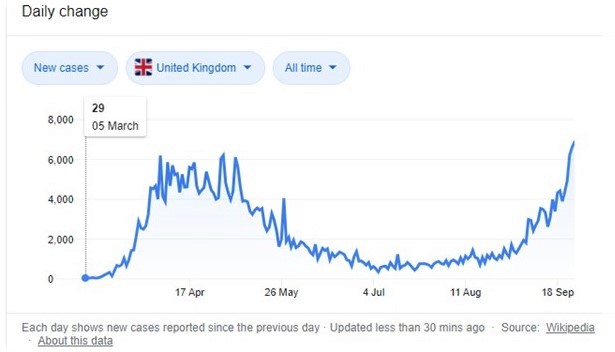 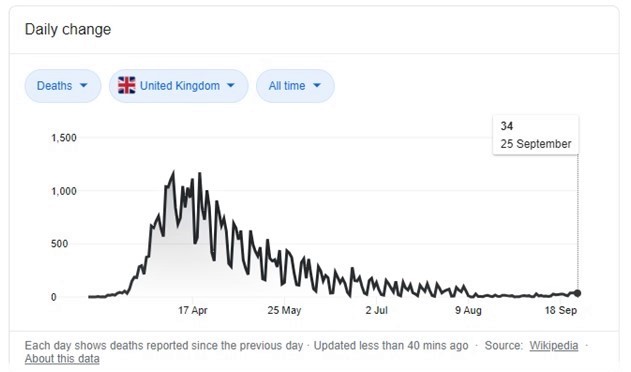 Testing: When you listen to the key scientific experts on pandemic and infectious diseases  and the COVID-19 global learnings  just about the most important thing is to: Test, Track, Trace then Treat and Isolate. Its not rocket science  its logic. But this is something that has been too long getting going in the UK  we should not be proud of the Test-Track-Trace performance in the early months and most people would not rate it high even now  six months later. The countries that seem to have eradicated it effectively are countries with a super trace-track-test system.

Singapore Example: wed like to pluck out Singapore as a good example  because this is a very densely populated and polluted city-state (many local smelly refineries, lots of traffic and airplanes) that is an international travel hub. Its not windy. There are many cool air conditioned buildings. Most people live in fairly cramped conditions in small flats  with many multi-generational families and an aging population. But they are disciplined people and have an excellent track and trace system. Just look at how they seem to have eradicated the COVID-19 virus  no deaths for weeks. 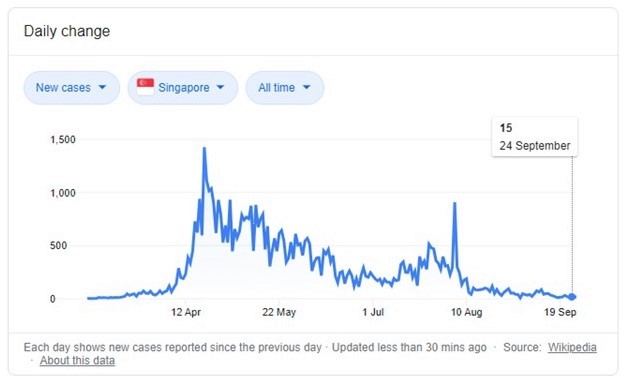 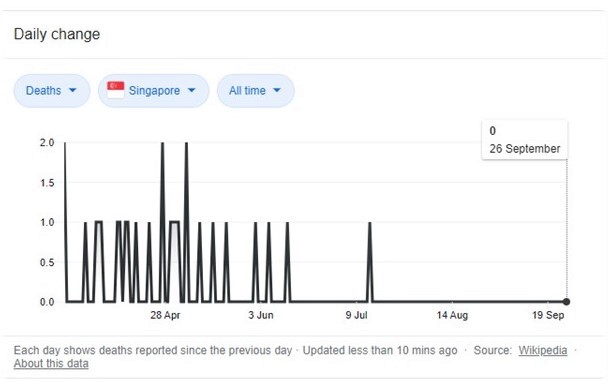 Testing System: Its also worth mentioning that the degree of testing has shot up  so along with more tests  more people will be confirmed with the virus. But it does seem that as soon as Lockdown measures are relaxed  cases start to shoot up again. However, deaths in the UK  that peaked at over 1000 a day in April  are now down at the 20-40 a day level  very low in comparison to April. That said, there is a concern that in a few weeks time 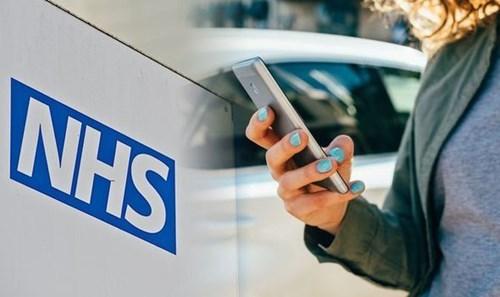 , the death rates will shoot up like they did end March  time will tell. But the other likely factor is that treatment is now far better and more proactive. There is also an establish track and trace system. We understand doctors are now using Steroids in large amounts to reduce the inflammation of the lungs that is the main killer  the more inflamed the lungs get, the more fluid builds up  then breathing difficulties start  oxygen cannot be absorbed fast enough  organs start to fail and then heart attacked become common. Particularly with obese people, diabetics, elderly and people with weak hearts  this lung infection and inflammation is the underlying cause of death. In some cases, the body cannot lift the chest to allow enough oxygen to enter and feed the body  its like suffocating. Being slim, young, very fit with no underlying health issues and not smoking helps to prevent death if you contract COVID-19. Education is also important  health education and hygiene  understanding how people can get infected and doing actions to prevent it:

· Not touching your nose 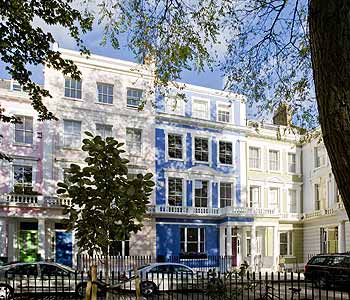 · Washing your hands for 40 second regularly

· Possibly wearing glasses (even better with side protectors  like safety glasses)

· Keep your hands away from your face  never shaking hands

· Stamp duty holiday through to March 2021