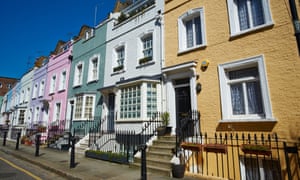 Average house prices in London hit a record high of £480,857 in September, leaving them 57% above their 2007 levels. Photograph: LH Images/Alamy

House prices rose in September at the fastest annual rate since the aftermath of the Brexit vote in 2016, according to the UKs biggest building society, as buyers continued to take advantage of a benign market despite the coronavirus pandemic.

The average UK house price rose by 5% in September compared with the same month last year, to £226,129  a record high, Nationwide reported.

The pandemic has shaken up the housing market, with the return of demand after the UK-wide lockdown and temporary cuts to stamp duty helping to sustain sales even as economists forecast a significant increase in unemployment over the coming quarter.

Prices rose by 0.9% month on month in September after jumping by 2% in the previous month as housing market activity surged, Nationwide said. Separate data published on Tuesday by the Bank of England showed that mortgage approvals during August had risen to the highest level in almost 13 years and the rival mortgage lender Halifax also reported record high UK prices in August.

Price jumps were evident across the UK, with the south-west of England and the commuter towns surrounding London recording increases of more than 5% in the third quarter of 2020 compared with a year earlier. Only in Scotland and the north-west of England did the pace of annual growth slow during the quarter.

Average prices within London hit a record high of £480,857 in September, leaving them 57% above their 2007 levels, shortly before the global financial crisis. 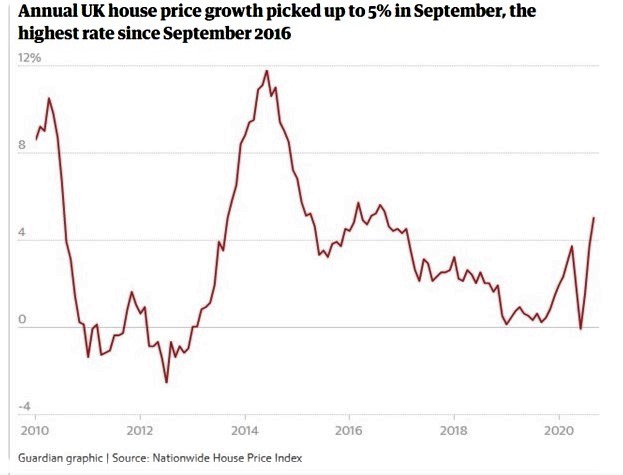 Robert Gardner, Nationwides chief economist, said: The rebound [in UK prices] reflects a number of factors. Pent-up demand is coming through, with decisions taken to move before lockdown now progressing.

Guardian Today: the headlines, the analysis, the debate - sent direct to you
Read more
The stamp duty holiday is adding to momentum by bringing purchases forward. Behavioural shifts may also be boosting activity as people reassess their housing needs and preferences as a result of life in lockdown.

However, some economists predict that the boom in house prices may run out of steam in the coming months as the governments support for the job market diminishes significantly, and unemployment is expected to hit 8% by the end of the year, according to independent forecasts collated by the Treasury.

The stamp duty holiday for properties below £500,000 will also expire on 31 March 2021, unless the chancellor, Rishi Sunak, chooses to extend it in a delayed budget.

Sign up to the daily Business Today email or follow Guardian Business on Twitter at @BusinessDesk
One economic forecaster, the EY Item Club, suggests that house prices could be about 5% lower than now by mid-2021 as the economy worsens.

Hansen Lu, an economist at Capital Economics, a consultancy, said: Price gains are likely to slow as the pent-up demand driving the market now is expended. Looking ahead, we think a weak underlying economy and the end of the stamp duty cut will slow house price growth to a standstill by the end of 2021.

The mini boom in house prices may partly reflect the shift to working from home during the pandemic, Lu added: residential housebuyers looking for more space are effectively paying for floor space that was previously paid for by their employers.