House price gains at strongest levels in 18 years... but estate agents warn the mini-boom is 'increasingly at odds' with the long-term property outlook

House prices are looking stronger than at any time in the last 18 years but this looks increasingly at odds with the long-term outlook, according to a report from property experts.

The Royal Institution of Chartered Surveyors said its house price index - the number of estate agents seeing prices rising versus falling or level - shot up unexpectedly to +61 from +44 in August.

Rics said that was the highest reading since June 2002. A Reuters poll of economists had expected a reading of just +40.

Rics said house price growth has continued to accelerate in all regions, except for more modest rises in London, with its survey of estate agents recording sales increases across the UK. 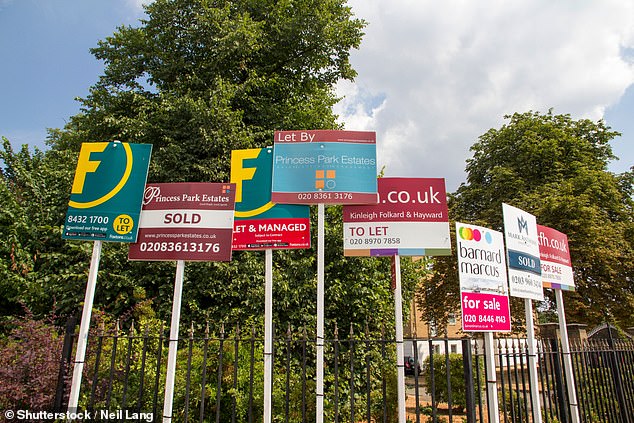 There was exceptionally strong growth in East Anglia, the South West, and Yorkshire and the Humber. Buyer enquiries, agreed sales and new listings all remained strong in September, with surveyors expecting sales to keep rising in the next three months.

However, this near-term view is 'is becoming increasingly at odds with the longer term view', Rics said, with surveyors see sales falling back next year as they expect more job losses once the furlough scheme is withdrawn.

Simon Rubinsohn, Rics chief economist said: 'There is increasing concern that the combination of significant job losses over the coming months allied to the scaling back of policy initiatives in early 2021 will have an adverse impact on transaction levels.'

And yet, many surveyors doubted that this will prompt a fall in house prices - although that varies across regions, with those in Wales more optimistic than in London, North East, Yorkshire & the Humber and the West Midlands.

'There is little sense this softer sales picture will be accompanied by very much easing in the momentum around prices and rents adding to the ongoing challenge around affordability,' Rubinsohn added. 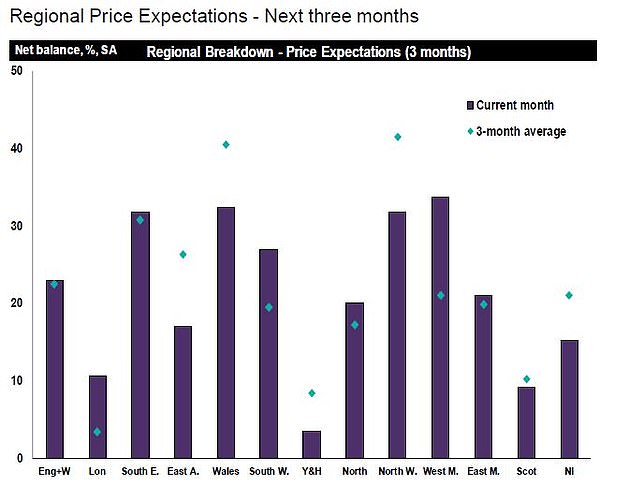 Rics said the supply of fresh homes coming to market has been increasing for four months in a row - the longest stretch of growing supply since 2013. But stock levels remain relatively low, averaging 42 properties per estate agent branch, the report said.

It comes as Halifax yesterday said house prices jumped by 7.3 per cent in September - the strongest annual increase since June 2016 - taking the average price to £249,870. 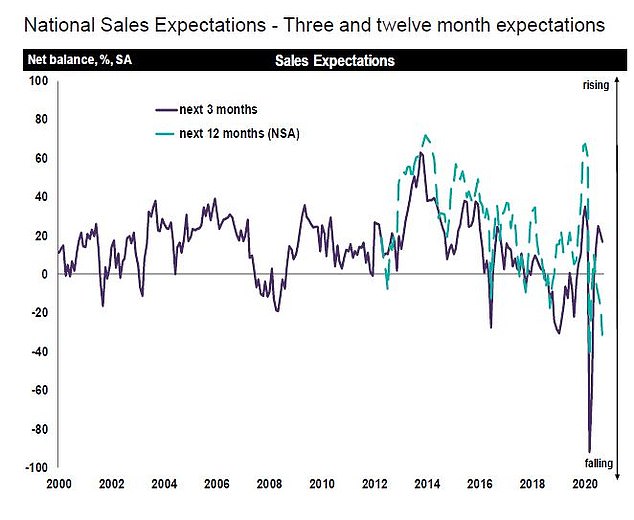 But experts predict the uptick to be short lived however, claiming demand is being driven by a combination of pent-up demand released after the lockdown market freeze, the stamp duty cut, and home workers looking to 'upsize' to larger properties.

Three weeks ago, economists at the Centre for Economics and Business research predicted that house prices will fall by almost 14 per cent next year when the stamp duty holiday comes to an end and job losses rise further.

James Brown of Norman F Brown in Richmond, North Yorkshire  - one of the estate agents surveyed - said: 'I suspect that the heat may go out of the market this Autumn leading into the Christmas period after a very buoyant summer but I think that demand for properties in desirable rural areas will still remain due to the pandemic.'

Rics also found that while demand for flats to rent kept rising across the UK, London was the only place where it actually declined, with more surveyors now expecting a decrease in rents in the coming months. 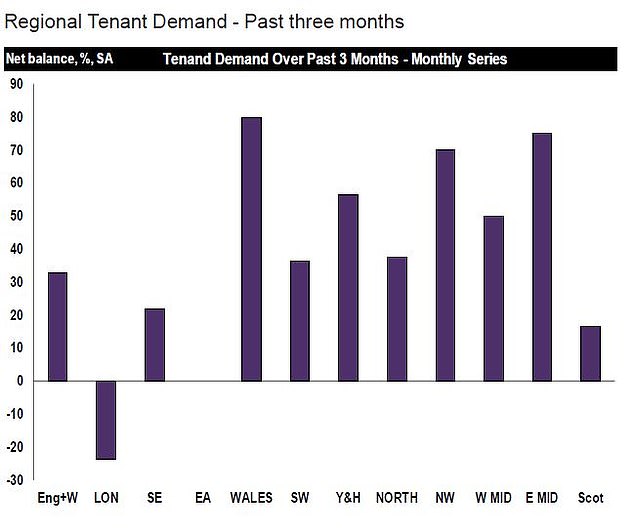