Stamp duty holiday window starts to close NEXT WEEK: Buyers told to begin searching or risk missing out - but will rushing to buy a home cost you more?

Property experts have warned prospective home buyers to start their search by the end of the month latest to avoid missing out on a saving from the stamp duty holiday.

Financial giant L&G said purchases can take three to five months to complete, but with asking prices hitting a record high as people clamour to take advantage of the tax break, according to property listing site Rightmove, rushing to buy could prove a false economy.

Potential buyers must not only weigh up the the maximum £15,000 saving from the stamp duty holiday against how much extra they will pay for a property in a seller's market, but also whether they will get more for their home too to balance that out.

Figures from Rightmove revealed that average asking prices for homes are now nearly £17,000 higher than last year, with the average price reaching a new all-time high of £323,530. 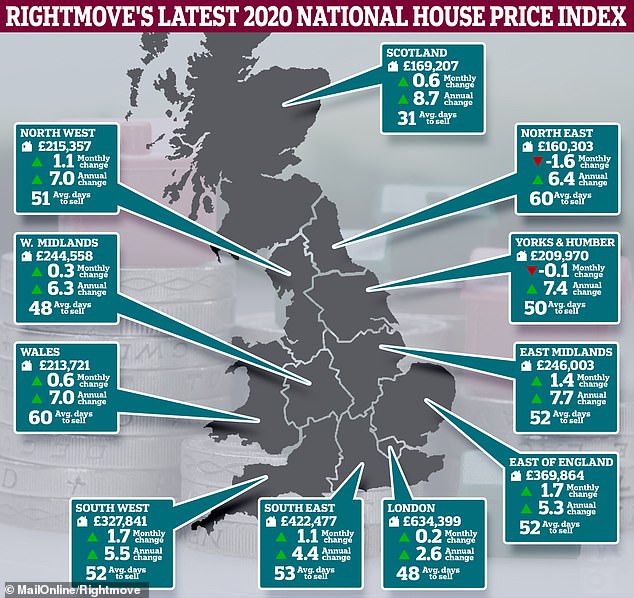 In July Chancellor Rishi Sunak announced a stamp duty tax holiday on the first £500,000 of a home's purchase price, saving buyers up to £15,000 on homes bought before the end of March next year.

That leaves five months from the start of November to find a home, offer and complete on a purchase and still benefit from the tax break, but now financial giant Legal & General has warned that even this is cutting it fine.

According to the firm, which offers mortgage advice through its mortgage club, the home buying process can now take months to complete.

L&G's Kevin Roberts said: 'Those wishing to take advantage of the holiday will need to plan carefully to avoid missing the deadline, particularly if they have their own property to sell first.'

In theory, taking advantage of the tax cut looks like a no brainer, but it could be a false economy.

New house price data suggests that rushing into a home purchase may end up costing you more in the long run despite the savings made on stamp duty.

Asking prices are £17,000 more than a year ago, according to Rightmove. This sizeable jump means asking prices have risen at 5 per cent annually, the highest annual rate for over four years.

Rightmove warned asking prices could peak soon, with an annual growth rate of 7 per cent in December this year, before starting to drop off at the turn of the new year.

ONS figures based on Land Registry sold prices data show the average house price up £8,900 since the start of lockdown.

Yet a growing body of property insiders and analysts think the housing sector's 'mini-boom' will start dropping off once the Chancellor's stamp duty holiday comes to an end on 31 March.

The restricted availability of mortgage deals, rising unemployment and mounting economic turmoil, they argue, means the optimism and buoyancy seen in the market now stands on a knife edge.

This could mean buying a home when prices are artificially inflated by a surging market could cost you more - even if you save on stamp duty.

You could also be left with a bigger mortgage than your home is worth if house prices were to fall significantly.

Rightmove noted that activity in the sector had started 'easing off' this month as the scale of the economic damage of the pandemic becomes more apparent.

Even in many popular areas, many sellers have not been getting the offers that they hoped for and some are opting to reduce prices to try to get moving.

While the Chancellor's stamp duty holiday has given the sector a boost, lenders have been slashing higher loan-to-value mortgages, meaning many prospective first-time buyers remain locked out of the market.

With increasing supply and uncertainty around Covid, we expect prices to flatten out now we are past the peak autumnal market
Dominic Agace, chief executive of Winkworth estate agents

Expected to rise significantly over the coming months, the unemployment rate grew to 4.5 per cent in the three months to August, compared with 4.1 per cent in the previous quarter.

Redundancies rose to their highest level since 2009, the Office for National Statistics said.

Dominic Agace, chief executive of Winkworth estate agents, said: 'With increasing supply and uncertainty around Covid, we expect prices to flatten out now we are past the peak autumnal market.' 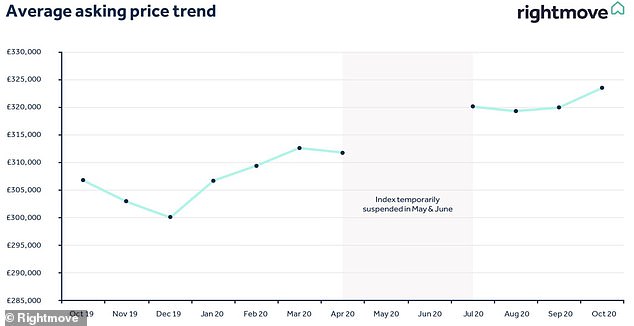 Moving up: Average asking prices on homes coming up for sale are on the rise

Should you wait to see what happens to house prices?

Before the pandemic a mortgage application for a borrower with straightforward circumstances took less than two weeks. Since the re-opening of the market, this process is taking much longer, according to L&G.

Those with more complex backgrounds, such as those with impaired credit histories or who have been on furlough, may need to allow up to six to eight weeks to get approved for a mortgage.

In theory a buyer with good credit could wait to see what happens to house prices in the new year and still buy in time to take advantage of the tax break.

That depends on speedy processing, valuation and legal work however - and this can typically take around three months.

Bear in mind also that there could be a surge of people applying for finance leading up to the deadline, leading to further delays from banks and building societies.

Mortgage lenders have already pulled half of all deals since March, citing the current spike in demand and an inability to process a wave of new loan applications.

This means a further surge in activity could cause lenders to be even more cautious about the deals they offer. More mortgages could be pulled from the shelves, leaving a waiting buyer with fewer deals to choose from. 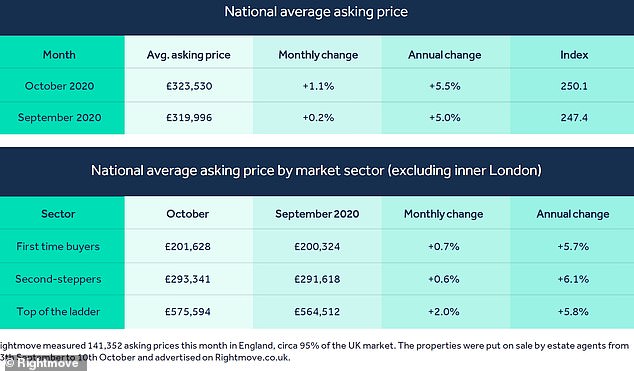 National picture: Average asking prices up and down the country, according to Rightmove

Sellers shouldn't be 'too optimistic' on asking price

Tim Bannister, Rightmove's director of property data, said: 'Previous records are tumbling in this extraordinary market, and there are still some legs left in the upwards march of property prices.

'We predict that the annual rate of growth will peak by December at around 7 per cent higher than a year ago.

There are some signs of momentum easing off from these unprecedented levels
Tim Bannister, Rightmove

'Many buyers seem willing to pay record prices for properties that fit their changed post-lockdown needs, though agents are commenting that some owners' price expectations are now getting too optimistic, and not all properties fit the must-have template that buyers are now seeking.

'Not only is the time left to sell and legally complete before 31 March stamp duty deadline being eaten away by the calendar, but more time is also needed because the sheer volume of sales is making it take longer for sales that have been agreed to complete the process.'

Bannister warned sellers and their estate agents against being 'too optimistic' when it comes to their initial asking price.

He added: 'Whilst activity levels continue to amaze there are some signs of momentum easing off from these unprecedented levels.' 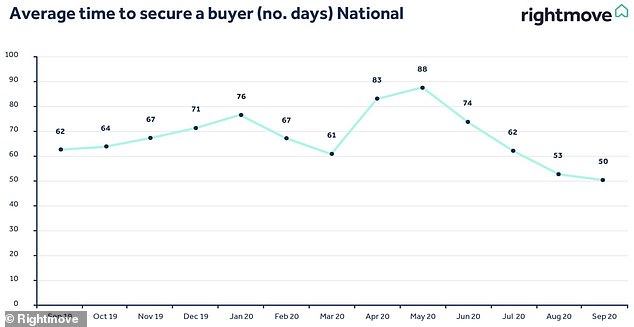 Getting quicker: The average time it takes to sell a home in Britain 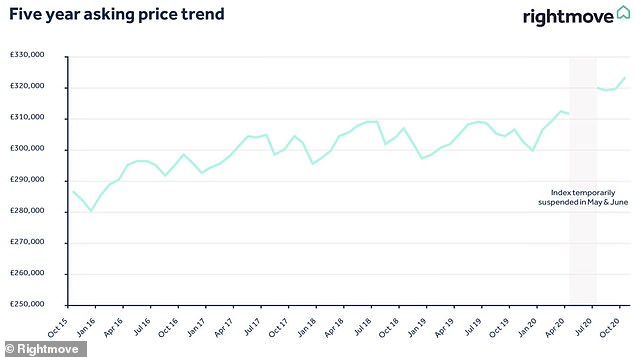