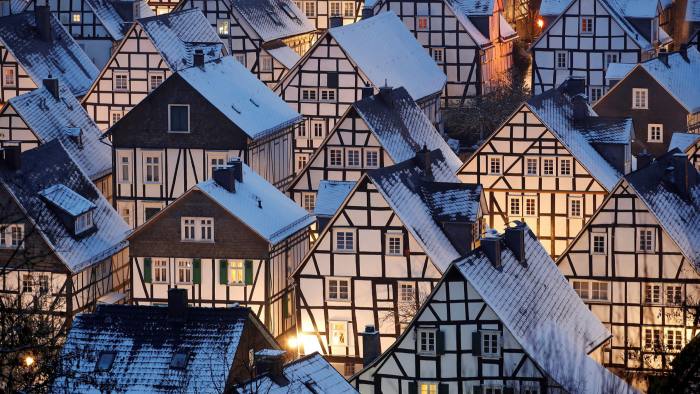 Surge in European house prices stokes concerns over market resilience Financiers worry that fallout from pandemic will catch up with soaring valuations Freudenberg in the heart of the federal state of North Rhine-Westphalia near the city of Siegen, Germany. Some German banks are offering to lend 100 per cent of the purchase price © Wolfgang Rattay/Reuters Share on Twitter (opens new window) Share on Facebook (opens new window) Share on LinkedIn (opens new window) Save Martin Arnold in Frankfurt and Domitille Alain in Paris 13 HOURS AGO 57 Print this page Be the first to know about every new Coronavirus story Get instant email alerts The housing market acts as the canary in a coal mine  prices tend to fall as a wider economic downturn looms. But this year, with a deep global recession caused by the coronavirus pandemic, property valuations have kept on rising in many countries. House price growth has accelerated to an annual pace of almost 4 per cent among the OECD club of rich countries this year, with even faster rises in Europe and the US. Some financiers, however, wonder if it is only a question of time before the economic fallout from the pandemic catches up with Europes soaring housing market, especially after many countries reimposed lockdowns to combat a fresh wave of infections. The pandemic is not good news or helpful in any way for the housing market, said Matthias Holzhey, a UBS economist and co-author of its annual global real estate bubble index, which compares house prices in 25 of the worlds biggest cities. It is clear that the economic recovery is still not happening, wealth is down, and rents are falling in most cities, so your alternative to buying a house is getting cheaper, said Mr Holzhey. The fundamentals just do not point to an ongoing housing boom. Yet all the signs are that this is exactly what is happening. While the world suffered its deepest postwar recession between the first and second quarters, house prices in the richest countries not only kept rising but accelerated, according to OECD figures. Data is more patchy for the third quarter, but it mostly points to further increases. Underpinning the resilience of housing markets are the vast stimulus packages from governments and central banks that have supported struggling companies, allowed many workers to keep earning and  crucially  kept borrowing costs near record lows. In the US, falling mortgage rates and higher state benefits combined to shield the housing market from the pandemic as prices rose by an annual rate of almost 5 per cent in the second quarter.

There were even sharper price rises in much of Europe, notably Germany, the Netherlands, Portugal and Poland. Prices in Russia have soared 15 per cent, fuelled by state subsidies.  As housing costs keep climbing, the pandemic is prompting some people to abandon expensive city locations in search of more space. In the UK, prices of detached houses rose at double the rate of apartments between March and September, according to Halifax.  In France, Grégoire Kiss, a 42-year-old IT manager, and his wife Blandine recently left the rented Paris apartment where they lived with their two children to buy a farmhouse on the Normandy coast. For us the trigger came when we exited lockdown, said Mr Kiss. One of the positive effects of this crisis has been employers making working from home easier. Such newly mobile workers leaving Paris may have contributed to a rare monthly drop in house prices in the city, which fell 0.5 per cent in September, though they are still up more than 2 per cent this year, having risen over a third in five years, according to research by Meilleurs Agents. We noticed the rush in the early days of the lockdown, as 20 per cent of Parisians went to work remotely in the countryside, said Pierre Madec, economist at the OFCE think-tank in Paris.

That begs the question: are we ready to lose 20 per cent of Pariss population? 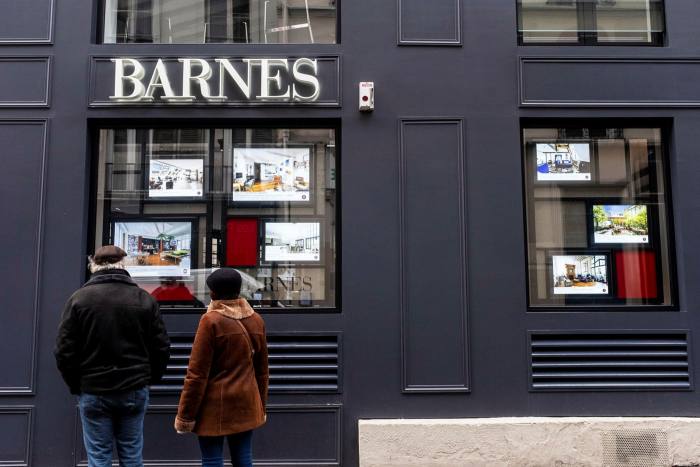 Paris suffered a rare monthly drop in house prices © Anita Pouchard Serra/Bloomberg Soaring property prices are also causing concern in Germany, where the central bank said in a recent report that apartments in the countrys biggest cities were 30 per cent overvalued compared with the long-term ratio of prices to rents  although it added that this reflected rising land prices rather than any destabilising, speculative demand motives. The volume of land sold each year in larger cities has fallen by a third since 2012 while prices have more than doubled, according to the German construction industry association. The number of new apartments built in the country last year rose 2 per cent to 293,000  but that remained below the 400,000 a year needed to meet demand. Eyebrows were raised in Munich by last months 8m sale of a 300 sq m apartment, which set a new record for the city. The share prices of German property developers Deutsche Wohnen and Vonovia both recently hit new 12-year highs. With Germans agreeing 10-year mortgages at rates as low as 0.6 per cent and some banks offering to lend 100 per cent of the purchase price, it is easy to understand what is fuelling the market.  We dont expect the German housing market to come down any time soon, said Jochen Möbert, a real estate analyst at Deutsche Bank. Yes, there are risks ahead. But we are seeing an influx of capital as investment funds reallocate money from financial markets to the housing market.

One worrying sign for Europes housing market is that banks are starting to rein in their mortgage lending, fretting about risk perceptions related to the general economic outlook, according to the European Central Banks latest quarterly survey of lenders. Pernille Henneberg, economist at Citigroup, said in a recent report that a lack of appetite for lending or tighter credit standards, due to worries about borrowers creditworthiness, may challenge the degree to which the monetary easing affects the real economy. Similar concerns are regularly expressed by Andrea Enria, ECB head of supervision, who this week repeated his warning that the pandemic could leave eurozone lenders with an extra 1.4tn of bad loans  well above the levels of the regions 2012 debt crisis. If this worst-case scenario happens, analysts predict it could trigger a sudden tightening of the ultra-loose mortgage market, dragging down house prices. The eurozone is the biggest risk area, said Mr Holzhey at UBS, adding that he was telling clients it is time to sell out of property.