UK house prices rose at the fastest annual rate in more than four years in October but the mortgage lender Halifax said the market would slow over the coming months because of new coronavirus lockdown rules and a weaker economic backdrop.

Halifax said in October the average price of a home topped £250,000 for the first time, with prices up 7.5% compared with a year earlier. It was the strongest rate of annual growth since June 2016.

The governments stamp duty holiday on properties up to £500,000 until March has fuelled a sharp increase in house prices since the onset of the coronavirus pandemic despite Britains economy plunging into the deepest recession on record.

The so-called race for space, with many people reconsidering their lifestyles and looking for larger houses, or rural homes, during the crisis has also fuelled demand for bigger properties with outdoor space.

Since March, Halifax said the cost of a typical detached home had soared by 6%, or £27,371 on average, with people forced to work from home during the pandemic, and with enough money to move house, looking to relocate. In stark contrast, the average price of a flat has increased by only 2%, or £2,833.

However, the latest snapshot from the property market comes as the UK economy faces the prospect of a double-dip recession as harsh new lockdown controls come into force, putting businesses across the country under strain and threatening to drive up job losses.

Halifax said average UK house prices rose by 0.3% between September and October, to £250,457, which was the weakest rate of monthly growth since the chancellor, Rishi Sunak, announced the stamp duty holiday in July. The mortgage lender said the market was likely to slow further amid the second wave of Covid-19. 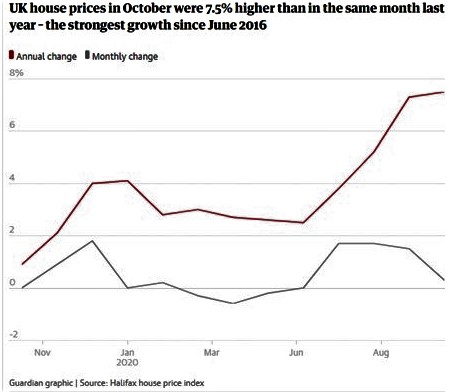 Russell Galley, Halifaxs managing director, said: While government support measures have undoubtedly helped to delay the expected downturn in the housing market, they will not continue indefinitely and, as we move through autumn and into winter, the macroeconomic landscape in the UK remains highly uncertain.

Though the renewed lockdown is set to be less restrictive than earlier this year, it bears out that the countrys struggle with Covid-19 is far from over. With a number of clear headwinds facing the housing market, we expect to see greater downward pressure on house prices as we move into 2021.

Howard Archer, the chief economic adviser to the EY Item Club, said the slowdown in monthly growth was a sign that prices were starting to come off the boil.

Rising Covid-19 cases, new lockdown rules and an expected rise in unemployment this winter, despite the last-minute extension of the furlough scheme, are expected to weigh on prices, he said.

The current robust housing market activity and firming of prices will prove unsustainable sooner rather than later, Archer said.

Sunak staged a U-turn on Thursday to extend the governments flagship furlough wage subsidy programme until the end of March. As many as 5.5 million jobs are expected to be furloughed in November during the second lockdown in England, up from about 2 million in October, according to the Bank of England.

However, unemployment could still surge to 7.8% by the middle of next year, from the current rate of 4.5%, the Bank said, in forecasts made before Sunak announced the extension of furlough beyond November.

Industry experts said the chancellor had created a cliff edge at the end of March, when furlough and the stamp duty holiday are due to end. The end of the Brexit transition period in December could also weigh on house prices.

Tom Bill, the head of UK residential research at the estate agents Knight Frank, said: What happens after March depends on any extra momentum generated by the avoidance of a no-deal Brexit and the emergence of positive news around a treatment or vaccine for Covid-19.

Meanwhile, the housebuilder Redrow said it was benefiting from the shift towards more homeworking during the pandemic, which has prompted more people to move in search of more space.

In a statement prepared for the companys annual general meeting on Friday, Redrows chairman, John Tutte, said: We entered the new financial year in a position of strength and this has been reinforced with strong trading since the start of the year. There has been resolute demand for homes with more space to live and work as customers reflect on their lockdown experiences.

Redrow, which has been scaling down its operations in London, said it was well positioned to capitalise on the evident shift in buyer priorities after increased focus on regions including the north-west, Midlands and home counties.

Redrows sales offices are staying open during Englands month-long lockdown but are closed in Wales because of its restrictions. In any event, customers are able to progress transactions through our online portal and we anticipate the handover of homes will be unaffected, the company said.

The housebuilder said it expects to restart dividend payments at the half-year.