First-time buyers face a £2,500 penalty as they have increasingly pushed out the market due to higher interest rates and poor mortgage availability.

Young buyers already have to contend with spiralling house prices which threaten to put home ownership beyond the reach of many. Data published by Halifax, the bank, on Friday showed that average prices hit £250,547 in October following a 7.5pc rise in the past year.

In addition banks have withdrawn hundreds of low-deposit mortgages, meaning that borrowers must find a much bigger down payment before they are able to buy a property.

Those able to pass these hurdles have been hit with higher interest rates this year, as banks increased charges for those with smaller deposits. This is despite the Bank of England setting interest rates at a record low of 0.1pc earlier this year.

Analysis for Telegraph Money by Hamptons International, an estate agent, showed buyers are spending as much as £2,484 a year more on their mortgage because of these changes.

Bank of England data showed that the average 5pc mortgage rate has risen from 2.96pc to 3.9pc in the past year.

Similarly, rates for 10pc loans have increased from 2.1pc to 2.79pc. Small deposit rates have increased much faster than those charged to customers with large deposits, Hamptons said. 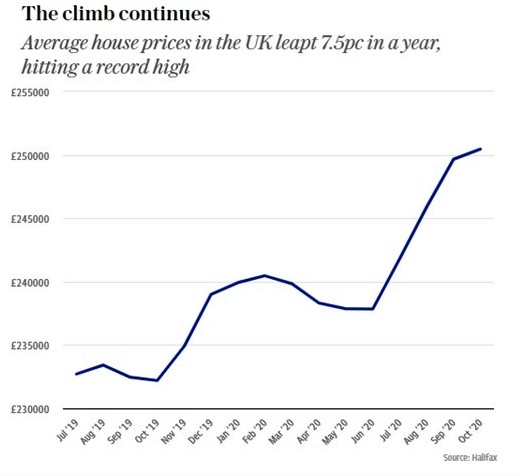 Its analysis found that the average first-time buyer in Britain now spends £97 a month more for their mortgage than they did a year ago, with the average spend rising from £783 to £880 a year. This is equivalent to an extra £1,164 a year being spent on housing costs.

In some parts of the country the rise has been more significant. In London mortgage costs have risen by £207 a month, or £2,484 a year.

Aneisha Beveridge, of Hamptons, said that mortgage lenders viewed small-deposit borrowers as risky and had increased rates accordingly. Most have withdrawn from the 5pc mortgage market entirely, she added.

However, there are signs that the 10pc mortgage market could slowly be returning. Chris Sykes of Private Finance, a mortgage broker, said new options had been launched by Accord Mortgages and Aldermore bank in recent days, although the Accord loans are only available to customers on a temporary basis.

Mr Sykes said that both these firms were smaller lenders and that first-time buyers desperately needed a high-street brand to return to the small-deposit market. Few banks want to offer these loans for fear of a house price crash in the new year, he added.

Ultimately, no lender wants to be holding a huge amount of these types of loans if there prices fall, he said.