'Covid-19, Brexit, job losses and stamp duty holiday end all pose a threat': Property experts think the writing is already on the wall for the 'mini-boom'

A string of estate agents and surveyors across the country have started to see activity in the housing market slow down after a surge in recent months.

While October saw buyer demand, sales and prices remain solid, the longer-term outlook for the market looks 'subdued', experts at the Royal Institution of Chartered Surveyors have warned.

Murray Wills, a director at estate agency Page & Wells in Maidstone, Kent, told Rics that the country's housing market faces a myriad of threats in the not too distant future.

Mr Wills said: 'Coronavirus, Brexit, redundancy threats and the potential ending of stamp duty land tax holiday are all threats to the continuing recent strong performance of the property market.' 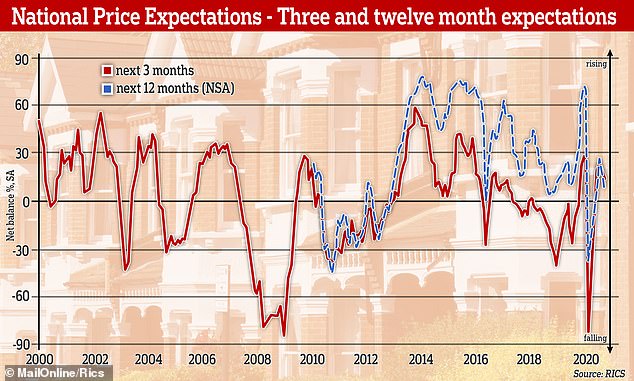 Price predictions: Property prices have been rising in recent months but could start to fall

Tom Wilson, a director of King West - Chartered Surveyors, Land & Estate Agents, based in the East Midlands, said in the Rics survey: 'Sentiment has taken a hit with regional lockdowns and negative economic commentary.

'Most have their eyes on next year now and beware the falling knife.'

But, Mr Wilson added: 'That being said, there is ongoing appetite for property priced reasonably and appetite from those yet to see a change in circumstances post lockdown.'

Horncastle-based surveyor Robert Bell, of Robert Bell & Company, said he thinks house sales and prices will fall this winter 'as unemployment increases and the Government tightens its belt.'

In Manchester, the city centre's housing market is already under pressure amid global lockdowns, one insider revealed.

Lawrence Copeland, a director at Lawrence Copeland estate agents in Salford, said: 'The Manchester city centre market is being affected by a lack of transient buyers and tenants from abroad and other parts of UK due to Covid and lockdown.

'This means we are reliant on local activity and 25 per cent of the market is missing whereas the suburbs are not affected in the same way.'

In London, James Perris, a director at De Villiers Chartered Surveyors, said: 'Prior to this second lockdown the market was already slowing, with very little sales activity now likely until the New Year.'

What happened in the housing market last month?

October was another 'strong' month for the housing sector and the near-term outlook looks upbeat, the Rics said in its latest survey today.

The housing market has been given the green light by the Government to stay open during lockdown two, meaning viewings, moves and sales can, in theory, continue to go ahead as planned. 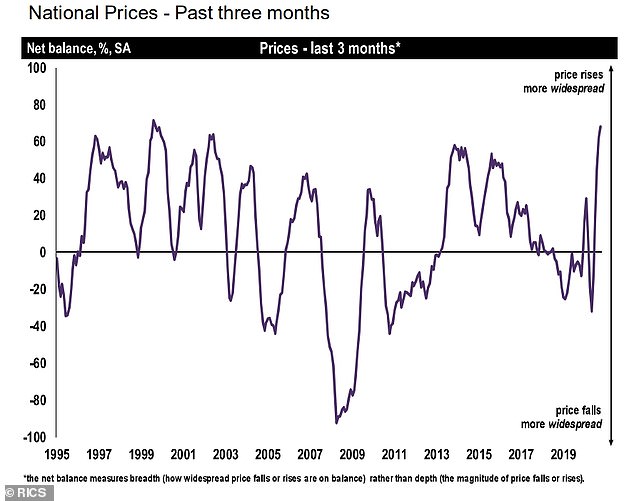 Price matters: Fluctuations in house prices in the UK since 1995, according to the Rics 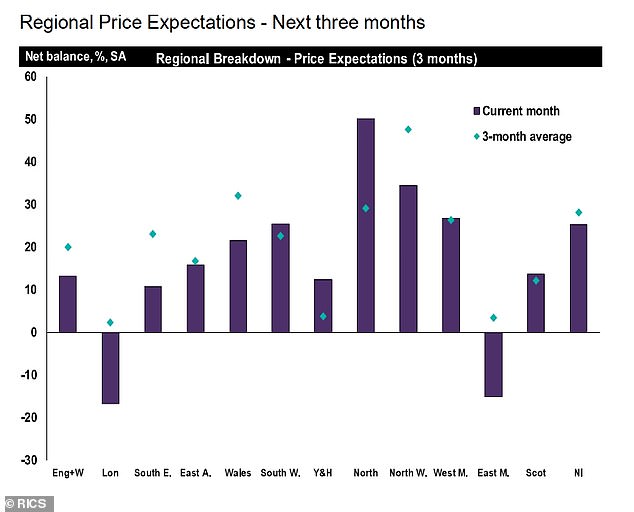 Regional variations: House price predictions for the next few months across Britain 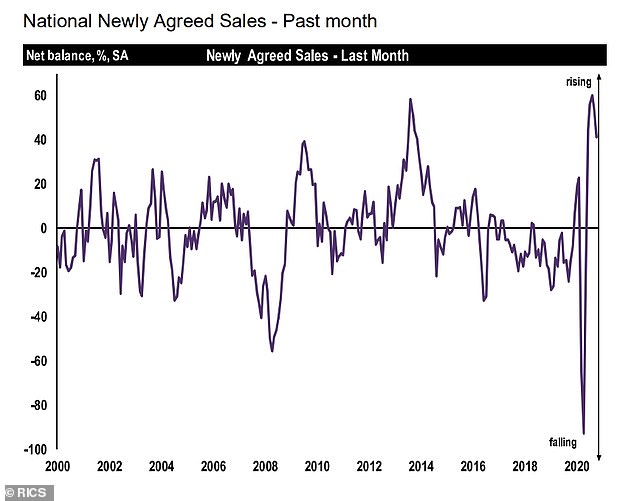 Sales: The number of sales in the property market rose sharply after the market opened up

Nearly half of the property insiders questioned in the latest survey by the Rics said they saw demand from buyers and sellers rise last month.

Summing up the housing sector's performance in October, the Rics, said: 'Although the most recent figure is a little more modest compared to those posted over the previous four months, it remains consistent with solid momentum behind buyer demand nonetheless.'

The average number of homes up for sale on estate agents' books rose from 42 to 43 last month, marking the 'longest uninterrupted sequence of growth in fresh listings going back to 2013.'

Sales levels continued to creep up last month, but the pace of growth has slowed, the Rics said.

Sales in East Anglia, the North West and the West Midlands were notably high last month.

On the price front, the Rics, said: 'The current upswing in demand and sales continues to drive house prices higher.

'At the headline level, a net balance of +68 per cent of survey contributors saw prices increase in October (up slightly from +62 per cent previously).

'What's more, house prices are rising across all parts of the UK, with Wales, the West Midlands, the South West and Yorkshire & the Humber all seeing exceptionally strong growth (in net balance terms).'

Will property prices fall next year?

A growing number of experts working in the property sector think house prices will fall next year, particularly once the stamp duty holiday comes to an end on 31 March.

The market has, many experts think, been propped up by Help to Buy, the stamp duty holiday and a release of pent-up demand triggered by the national lockdown in March.

Experts responding to the latest Rics survey are 'doubtful' that the property price rises seen now can be sustained for much longer. 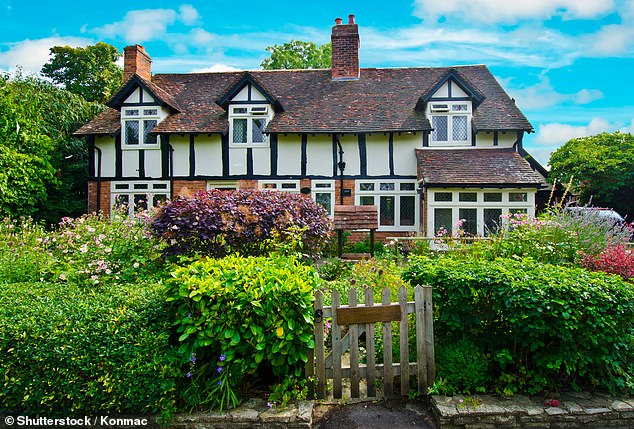 On the up, but for how long? Halifax said house prices have risen by 7.5% in a year

Rics said: 'Near term price expectations were trimmed slightly at the national level over the month, with the net balance coming in at +13 per cent compared to +22 per cent in September.

'Further out, at the twelve month time horizon, respondents expect a much flatter trend in house prices to emerge, evidenced by the latest net balance for the series easing to +8 per cent at the national level.'

Earlier this week, new data from mortgage lender Halifax revealed that house prices across Britain have increased by 7.5 per cent to over £250,000 in the last year.

Halifax said that property inflation had hit its highest level since the middle of 2016 on its long running house price index, with the average home almost £18,000 more expensive than a year ago.

But Halifax added that there were signs that momentum was tailing off with the average house price up just 0.3 per cent on a monthly basis in October, compared to 1.5 per cent in September.

Low interest rates are helping to support the market, but a mortgage crunch for buyers with smaller deposits is affecting first-time buyers and job cuts are expected to slow activity down and drag house price inflation back.

Will the Government extend the stamp duty holiday?

With lockdown two in full swing and the furlough scheme being extended into next year, many prospective buyers will want to know if the stamp duty holiday could be  drawn out.

At the moment, the stamp duty holiday expires on 31 March next year, meaning many buyers are currently in a race to get their property deals secured before the deadline.

This is Money has asked the Government whether there is a prospect of the stamp duty holiday being extended. At present, it looks unlikely that it will be.

A spokesperson for the Treasury told This is Money: 'The temporary stamp duty cut is helping to protect hundreds of thousands of jobs which rely on the property market by stimulating economic activity.

'Its time limited nature is what has encouraged people to take advantage of the scheme.'

Speaking to This is Money, Neil Foster, a director at Foster Maddison Property Consultants in Hexham, said the Government 'without doubt' needs to extend the stamp duty holiday beyond 31 March.

He said: 'We are managing ongoing transactions through lockdown two, but the draconian restrictions announced last week have lead to many vendors cancelling or postponing valuation appointments.

'This is impacting on the number of properties available to buyers which in turn tends to dampen their appetite for searching/viewing as the nights draw in.

'Vendors braving the market before Christmas look set to capitalise but by January the window for benefiting from the stamp duty holiday is going to disappear rapidly.'

He added: 'Reintroducing stamp duty on 1 April would set the market back significantly and could have a very negative impact at just the wrong time of year.

'Prices can only come under downward pressure and in turn vendors are likely to recoil until they see clear direction in the market.

'Buyers will feel hard done by in the immediate aftermath of the tax coming back on to purchases and there is a risk of an impasse with neither side feeling that 'the time is right'.'