A UK property market mini boom? For houses, yes  but not flats 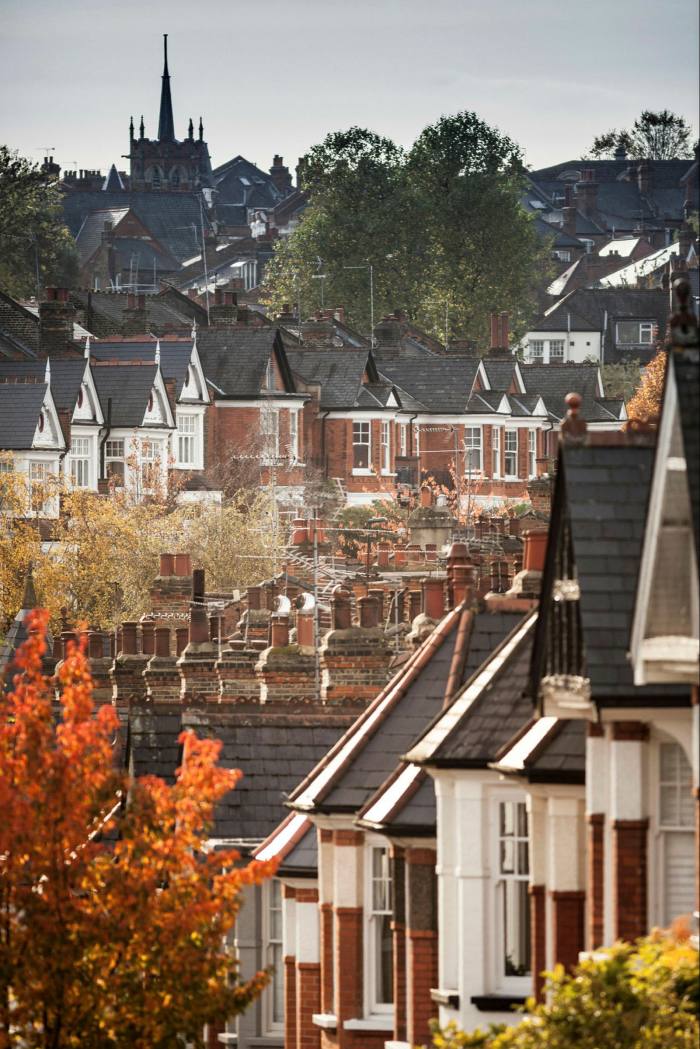 Ruth Baker has an urgent deadline. The graphic designer and her husband are desperate to buy a four-bedroom house they have found in Hitchin, Hertfordshire, by mid-January so they can apply for a primary school place for their three-year-old son. First, however, they need to sell their flat in Muswell Hill, north London.

Houses in Hertfordshire are getting snapped up very quickly, she says. And we naively thought our flat would sell easily, too. Yet, after almost two months on the market, and despite reducing the asking price by £15,000 to £525,000, they have had five viewings and no offers. [Our estate agent] hasnt explicitly said our flat is struggling due to having no outdoor space, but Im sure it is. While the UK property market has experienced a mini boom since reopening in May  by October, the average property price was up 7.5 per cent year-on-year, hitting a new record high, according to Halifax bank  the pandemic is causing an increasing number of buyers to shun flats. 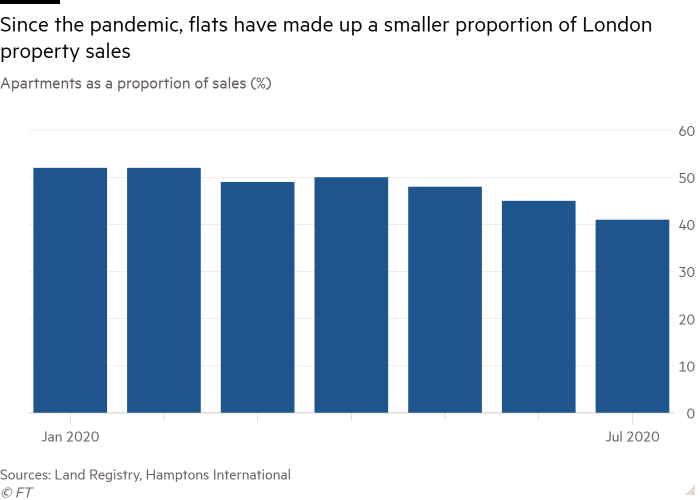 In London, the average price of a flat went up by more than any other property type between 2011 and 2019. But over the past 12 months this has been reversed and flats have been the weakest performers. This year is set to be the first time in more than a decade when flats make up fewer than half of all property sales in the capital, say estate agents Hamptons International. It adds that London flats are taking 70 days to sell on average, whereas houses are taking just 29 days. And thats if they sell. Separate analysis by PropCast, which maps the housing market, reveals that only 27 per cent of all flats listed for sale are finding buyers, compared with 44 per cent of houses.  Part of this is because of a drop in first-time buyers, who almost always purchase flats. According to property portal Zoopla, the proportion of UK properties bought as first homes has fallen to its lowest level in five years thanks to the economic fallout of coronavirus, and the reduced availability of higher loan-to-value mortgages.  Apartments are losing their appeal at the markets top end, too. Data company LonRes says the number of flats sold in prime London areas in August and September was 24 per cent lower than in the same period last year, whereas the number of houses changing hands increased by 3 per cent. Indeed, this year houses have made up a higher proportion of prime London property sales than in any year of the past decade. Values of flats sold in these areas are 1.8 per cent lower than a year ago, whereas house prices are 6.1 per cent higher.  The picture is echoed nationally, with houses selling faster than flats for the past six months in Britains cities, according to David Fell, senior analyst at Hamptons International. This is the longest period on record that houses have outperformed flats, he says. Buyers are looking for more space in the event of further lockdowns and in order to be able to work more easily and comfortably from home.  So, what does all this mean for the future of Londons flats? They make up just over half of the capitals accommodation stock, more than double the proportion anywhere else in the country.

Andrew Groocock, regional partner at estate agents Knight Frank, says it is a matter of size and access to outside space. On the whole, flats are not falling out of favour in London, he says. But smaller studios or one-bedroom apartments without outside space are challenging in the current market, with the prospect of future lockdowns weighing on buyers minds. Having a property with enough space  particularly for a home office  is the most crucial thing on buyers minds, says Henry Sherwood, managing director of The Buying Agents. As a result, some swanky London flats are being offered for sale with big discounts. A three-bedroom apartment with no outside space, now on sale for £2.2m in Knightsbridge, has been reduced by £1.05m since it was first listed in December last year. A five-bedroom flat in Chelsea is now £1.25m cheaper than its £4m first listing price. There is still a lot of overpriced stock on the market, Sherwood says. One reason for the drop in popularity of pricier flats  such as those in Londons Knightsbridge area  is that Covid-19 is keeping away foreign buyers © Getty Images Another reason for the sharp drop-off in the popularity of pricier flats is the fact Covid-19 is keeping away foreign buyers, who have traditionally bought vast swaths of the capitals new-build apartment stock. We are still selling off-plan to buyers from Hong Kong and China up to £1.5m to £2m, but if a property costs more than that they are going to want to look at it in the flesh, says Ed Lewis, head of residential development sales at estate agents Savills. He adds that sales over £2m to the international market are down about 25 per cent. Once the pandemic is over, demand for London apartments is expected to return. With the UK government planning to roll out vaccination doses from as early as next month, many hope that will be sooner rather than later. Hamptons data show that some landlords have already been buying flats  overall London sales to investors were up 65 per cent between June and October, compared with the same period last year, of which almost half were flats.

However, Phil Hubbard, professor of urban studies at Kings College London, hopes Covid-19 will reverse the trend of investors and developers creating ever-smaller flats aimed at young professionals and students. His departments research shows that the proportion of new housing in London smaller than the governments recommended national minimum space standard of 37 sq m increased from 5 per cent to 8 per cent between 2015 and 2019. Dense urban living may be more environmentally friendly and energy efficient, Hubbard has said. But if the price to pay is people living in smaller homes that preclude flexible working and home lives, and also encourage the transmission of Covid-19, or other yet-to-be-known viruses, perhaps the answer is not to continue the rush towards vertical living and micro-apartments. Ruth Baker, meanwhile, has asked her estate agent to start contacting buy-to-let investors in a bid to speed up her flats sale. Surely there are people who do still need to go out to work in London and are looking for somewhere to rent? she says. 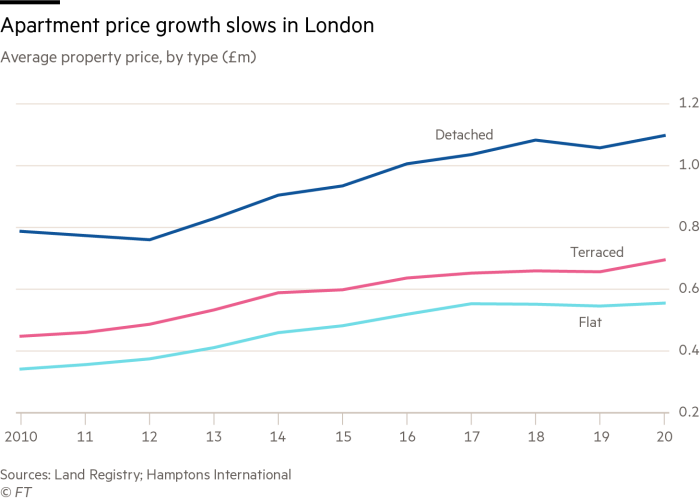 Although many of our friends with kids want to leave, not everyone is trying to move out of London. Is this the end of the housing ladder? Many people buy flats because it is all their budget will allow, of course, but are flats still effective as a first rung on the housing ladder? Not according to Neal Hudson, an analyst at consultancy BuiltPlace. The housing ladder is finished, he says. The idea that you could buy a flat in a city centre and then, after a few years, trade up to get a house in the same area doesnt work now for the vast majority of people. In order to move from a flat to a house, a homeowner requires property-price inflation and the ability to borrow more because their income has increased. That wont necessarily work, however, if house prices are growing faster than those of flats and incomes arent increasing at a significant rate. In the past year, the average price of a terraced house in London has risen by 5.84 per cent, according to Hamptons, whereas flat prices grew by only 1.74 per cent. Mortgage broker SPF Private Clients has looked at what this might mean for flat buyers if current trends persist. If a first-time buyer wanted to purchase a two-bedroom flat in Kentish Town, an area of north London, for £450,000, would they be able to trade up to buy a house locally?

Its tricky. Assuming they could first find a 25 per cent deposit, then the £3,340 in buying costs (rising to £10,840 after the stamp-duty holiday comes to an end next March), they would need an annual income of £75,000 to qualify for the mortgage (assuming a 4.5 x salary maximum loan-to-income). If they then held on to the flat for 9.4 years  which is the average time vendors who sold London flats this year kept them for  the property would be worth £529,218, assuming flat prices rose at 1.74 per cent a year. Over that time, mortgage payments would be £1,431 a month, which is certainly cheaper than the current typical rent for this kind of property, which is £1,600  though rents could increase over time. If the buyer wanted to upgrade to a three-bedroom terraced house in the same area, its price would have risen from £950,000 to £1,619,690, assuming 5.84 per cent annual growth for the 9.4 years. If they could take the equity out of the flat and pay the buying costs for the move (£108,112 in stamp duty plus total conveyancing and valuation costs of £4,550), then their annual income would have needed to nearly quadruple to £294,598 to qualify for the mortgage. All this means flat owners hoping to trade up will have to trade out to a cheaper area instead, says Mark Harris, the chief executive of SPF Private Clients. Trading out has been a big trend for London flat owners in recent years and we expect this to become even more pronounced. Follow @FTProperty on Twitter or @ft_houseandhome on Instagram to find out about our latest stories first.