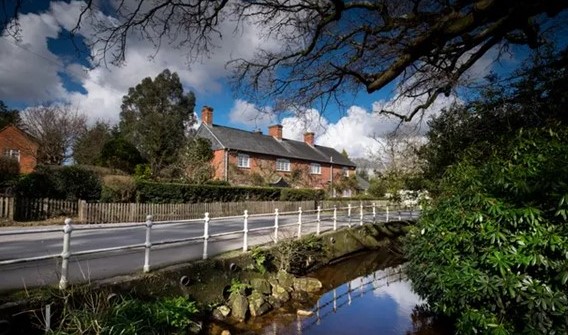 UK house prices have risen at their fastest rate in almost six years, with properties in national parks attracting a higher premium, according to Britains biggest building society.

Research by the lender indicates that nearly 30% of people considering a move were doing so because they wanted a garden or to be near parks and other outdoor space in the wake of the Covid-19 pandemic, and 25% were looking to get away from the hustle and bustle of urban life.

A property located within a national park attracts a 20% premium over an otherwise identical property, making it £45,000 more expensive. This is up from the 19% premium recorded last year and Nationwide said that the full effect of the pandemic had not been fully captured. Properties within 3.1 miles (5km) of a national park are also more expensive, and command a 6% premium.

The New Forest is the most expensive national park to live in, with an average price of £475,000 in villages such as Ashurst, Lyndhurst and Brockenhurst. Properties in the New Forest command an average premium of £95,000 compared with similar homes elsewhere.

The South Downs, which takes in a number of towns across Hampshire and Sussex such as Petersfield and Midhurst, is also popular, with an average house price of £368,000, and has the highest population of any of the national parks, at 117,900.

Andrew Harvey, a senior economist at Nationwide, said there were a number of benefits to living in or close to national parks.

He said: Those living in the parks can make the most of the great outdoors with a range of activities on their doorstep. Development is also controlled, with limited new housing construction, which also helps to explain why prices tend to be relatively high.

In recent months, the wider UK housing market has been booming, with demand boosted by a temporary stamp duty holiday on properties up to £500,000. Mortgage approvals for house purchase were at their highest level since 2007 in October, at 97,500, according to the latest data from the Bank of England.

The latest pick-up in the housing market in November came despite a weakening economy, but Nationwide and economists warned that the market would soon slow.

Robert Gardner, the Nationwide chief economist, said: Data suggests that the economic recovery had lost momentum even before the latest lockdown came into effect. Economic growth slowed sharply from 6.3% in the month of July to 2.2% in August and 1.1% in September  Rising infection rates and tighter social restrictions will have resulted in a further hit to growth in October and November. 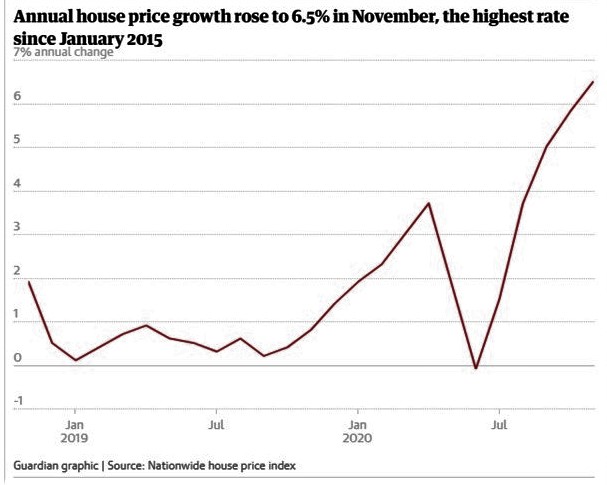 Housing market activity is likely to slow in the coming quarters, perhaps sharply, if the labour market weakens as most analysts expect, especially once the stamp duty holiday expires at the end of March.

Unemployment is forecast to rise to 7.5% next year, from a current rate of 4.8%. That would mean 2.6 million people unemployed by the middle of the year, after furlough comes to an end and companies struggle to stay afloat or retain some staff.

Andrew Wishart, a property economist at the consultancy Capital Economics, is forecasting a 5% drop in house prices next year  but not a house price crash. This would leave prices slightly higher at the end of 2021 than they started 2020.

With a vaccine likely to be rolled out in the first half of 2021 we think that the economy and employment will recover quickly preventing a prolonged fall in prices, he said.