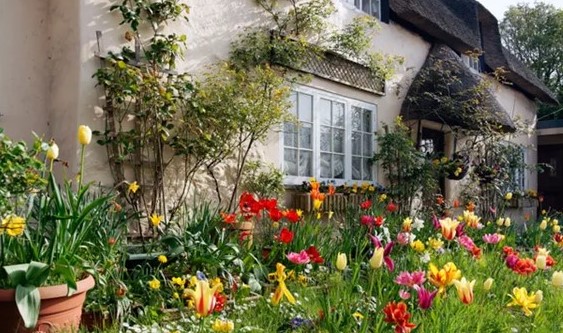 Tulips in bloom in the garden of a pretty cottage in Dorset.

Covid-19 sparked a race for space among householders fleeing cities and searching out bigger homes. A tentative recovery in the market after lockdown ended morphed into a raging boom after the chancellor cut stamp duty in England and Northern Ireland until 31 March 2021. Wales and Scotland followed suit, although the cuts were not as generous. In England and Northern Ireland, buyers have been able to save £10,000 on a £400,000 property and £15,000 on one costing £500,000.

The average price of a UK home started the year at £239,927, according to the mortgage lender Halifax, dropped back towards £237,00 after lockdown one, then rocketed to £253,243. Between the end of June and the end of November, prices experienced the fastest five-month gain since 2004. 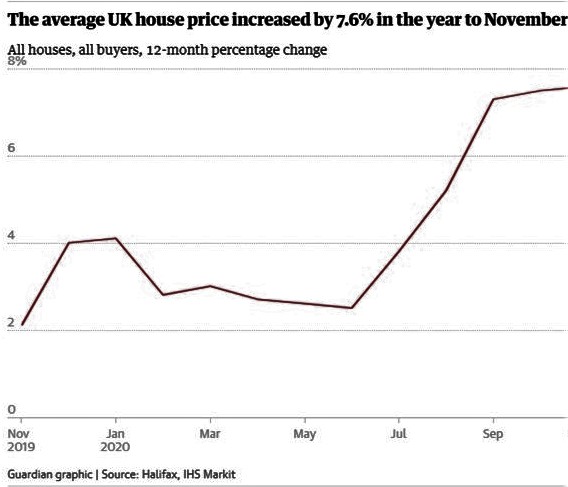 The pandemic triggered some remarkable changes in what we wanted in a home.

The website Zoopla analysed searches by buyers and found that open-plan living was sharply down in popularity (pretty uncomfortable when working from home), while a home office or study and gardens became the priority. Detached, rural and secluded became Zooplas fourth, fifth and sixth most common search terms, as we shunned metropolitan living.

Despite that, the biggest price rises in 2020 were not in rural idylls, according to the property website Rightmove, but in parts of Greater Manchester.

Meanwhile, one of the most salubrious of the London commuter towns, Sevenoaks in Kent, experienced the biggest price fall in 2020. The typical property in the town fell by £12,500 in value during the year, Rightmove said. But they started off very high in the first place, falling from £693,569 to £681,069.

The pace of increase is unlikely to continue in 2021: the stamp duty holiday is set to end, and a month later so will the furlough scheme. Meanwhile, help-to-buy has been redesigned to focus on first-time buyers. For them, at least, a slowdown should come as a relief.