London leavers bought 73,950 homes outside the capital in 2020, as the coronavirus pandemic led the biggest exodus from London in four years.

People from London bought homes worth a collective £27.6bn over the course of the year  the largest amount spent since 2007, according to research by the estate agent Hamptons.

The dash for property outside the capital was partly driven by a desire for larger homes with more space for home offices and gardens sparked by life under lockdowns. The same trend was experienced in other big cities across the country.

Sevenoaks, Windsor and Maidenhead, and Oxford were the three areas that experienced the biggest increase in the share of homes bought by Londoners, compared with 2019.

The stamp duty holiday, suspending payment of the tax on the first £500,000 of all property sales in England and Northern Ireland until April 2021, also helped to boost house sales.

Despite Covid-19 closing the housing market for seven weeks, the number of homes bought by Londoners outside the capital has risen to the highest level in four years, said Aneisha Beveridge, head of research at Hamptons.

While leaving London has been a rite of passage for many, often families reaching life-stage milestones, the effects of lockdown and the desire for space seems to have heightened this drift.

Meanwhile, the lure of a stamp duty holiday acted as an impetus for more buyers to bring future planned moves forward. The prospect of homeworking more regularly has also meant that London leavers are moving further than ever before. The average London leaver moved 10 miles further than in 2019 as buyers favour space over commutability.

The research found that the average distance moved by a Londoner buying outside the capital hit 40 miles for the first time in more than a decade, up from 28 miles during the first three months of the year.

This means the average person leaving London from May onwards travels as far as Cambridge to the north, Colchester to the east, Brighton to the south or Didcot to the west.

Hamptons said first-time buyers tended to stay closer to London than those selling up their capital home for a lifestyle change. Since May, the average first-time buyer leaving the capital bought 26 miles away.

Conversely, someone selling a home in London tends to sever their ties more deeply by moving much further, the agency said. The average person selling their London home to buy outside the capital travels 41 miles, 57% further than a first-time buyer. These numbers are reflected in the sorts of homes leavers buy, with someone buying a two-bed property moving an average of 34 miles, while someone buying a four-bed travels 43 miles. 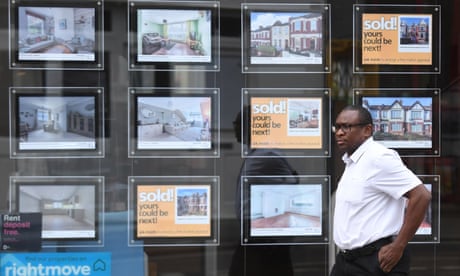 Beveridge said she expected the outmigration trend to continue next year. But usually as prices in the capital begin to flatline, which we forecast to happen in the second half of 2021, more Londoners decide to stay put, she said. Even so, given the housing market has been anything but normal since the onset of Covid, we expect to see the total number of homes bought by London leavers next year to hit 2016 levels.

The average price of a UK home started the year at £239,927, according to the mortgage lender Halifax, dropped to £237,00 after the first lockdown, then rocketed to £253,243. Between the end of June and the end of November, prices experienced the fastest five-month gain since 2004.

The pandemic triggered some clear changes in what people wanted in a home. The website Zoopla analysed searches by buyers and found that open-plan living was sharply down in popularity  as more people worked from home  while a home office or study and gardens became the priority. Detached, rural and secluded became Zooplas fourth, fifth and sixth most common search terms, as greater numbers of people shunned metropolitan living.