Landlords behind highest percentage of BTL purchases since 2016, according to Hamptons

Buy-to-let landlords are joining the rush to take advantage of the stamp duty holiday, with the proportion of property sales agreed with investors hitting its highest level in four years.

In November, landlords made 15% of agreed property purchases in England, Wales, and Scotland, more than at any time since December 2016, according to research from the estate agent Hamptons.

The Midlands and the north of England attracted the most attention from investors looking to add to their property portfolios.

More than one in five (22%) agreed sales in the West Midlands were to private landlords rather than buyers intending to move into the property, while investors were involved in 18% of sales in the north of England.

Blackpool was the most popular location for landlords, who were involved in seven out of 10 agreed sales in the Lancashire seaside town.

The housing market has been booming since the summer, thanks to a combination of pent-up demand after the end of the first lockdown and Chancellor Rishi Sunaks decision to temporarily halt stamp duty on all properties up to £500,000.

Investors are required to pay a 3% stamp duty surcharge on second homes worth more than £40,000, which has remained in place during the stamp duty holiday, but landlords have still been able to reduce their overall bill.

Homebuyers wanting to take advantage of the holiday have been warned that high demand for mortgages and coronavirus restrictions have created delays in the purchase process, with mortgage approvals hitting a 13-year high this autumn.

Hamptons estimates that landlords will pay £365m in stamp duty on house sales agreed between September and November, provided the deals are completed before the end of the tax holiday on 31 March 2021.

However, this figure could rise by 20%, or £74m, if those purchases miss the deadline, and if the stamp duty holiday is not extended by the chancellor.

The average price paid for a property by an investor in November was £180,000, which is around £80,000 less than the average amount paid by an owner-occupier.

This means that the average cost of missing out on the tax break would be £1,100, according to Hamptons researchers. 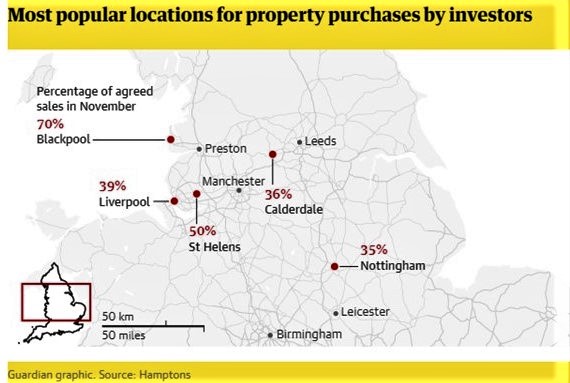 A typical investor who is liable to pay the surcharge would see their stamp duty bill rise from £5,400 to £6,500 if they fail to complete their purchase before the deadline.

A record number of purchases by landlords were in cash, accounting for just over half (51%) of properties bought, a sign that experienced investors are looking to benefit from reduced stamp duty bills, said Aneisha Beveridge, head of research at Hamptons.

With over half of investor purchases made in cash during November, those taking advantage of the holiday are disproportionately larger investors expanding portfolios rather than new investors starting out. And with landlords also making up a rising proportion of sellers, in many cases, larger landlords are buying homes from smaller landlords, Beveridge said.

Blackpool was the most popular local authority area for investors, followed by St Helens in Merseyside (where investors made 50% of property purchases), Liverpool (39%), Calderdale in West Yorkshire (36%), and Nottingham (35%).

London did not feature in the top 10, although Lewisham, in the south-east of the city, took top spot in the capital, where 20% of property sales were agreed with investors.