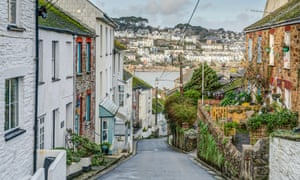 A street in Polruan, Cornwall. Halifax says UK house prices fell 0.3% month on month in January to an average of £252,000. Photograph: John Lunt/Alamy


House prices in the UK suffered their biggest fall since April as the pandemic homebuying boom fuelled by the governments stamp duty holiday loses momentum, according to Britains biggest mortgage lender.

Halifax said UK house prices fell 0.3% month on month in January to an average of £252,000, the biggest drop since a 0.6% decline last April at the beginning of Covid-19 crisis. The fall ends a seventh-month streak of house price growth dating back to May, when the average UK house price declined by 0.2%.

There are some early signs that the upturn in the housing market could be running out of steam, said Russell Galley, the managing director of Halifax. How far and how deep any slowdown proves to be is a challenge to predict, given the prevailing uncertainty created by the pandemic. With swathes of the economy still shuttered, and joblessness continuing to edge higher, on the surface this points to slower market activity and downward price pressures in the near-term.

Halifax said that despite the January fall, which has pushed the price of a typical property to its lowest level since October, house prices are still about £13,000 higher than a year ago.

However, the lender said the annual rate of house price inflation, 5.4%, has cooled to its lowest level since last August. The annual rate hit as high as 7.6% in November.

Industry figures for agreed sales remain well above pre-pandemic levels but new instructions to sell have decreased noticeably, Galley said. And total stock held by estate agents has risen to its highest level since before the EU referendum in 2016.

Halifax said that most people who had sought to take advantage of the governments stamp duty holiday on homes under £500,000 in England and Northern Ireland, which ends on 31 March, would already be near completion, which had contributed to a slowing in the overall market.

The stamp duty holiday has undoubtedly helped to fuel growing demand among households for larger properties, Galley said. However, given the current time to completion across the market, transactions in the early part of 2021 probably dont include many borrowers who expect to benefit from the stamp duty reprieve.

Halifax added that despite the short-term outlook of a cooling in prices, the wider drivers of more people looking to move out of cities and seeking bigger homes with office space and gardens  fuelled by the shift in working patterns because of the pandemic  could sustain the housing market.

We saw the power of homeowners to drive the market in the second half of last year as many people looked to find new properties with greater space, Galley said. Such structural demand changes, coupled with any further policy interventions by government, could yet sustain underlying market activity for some time.