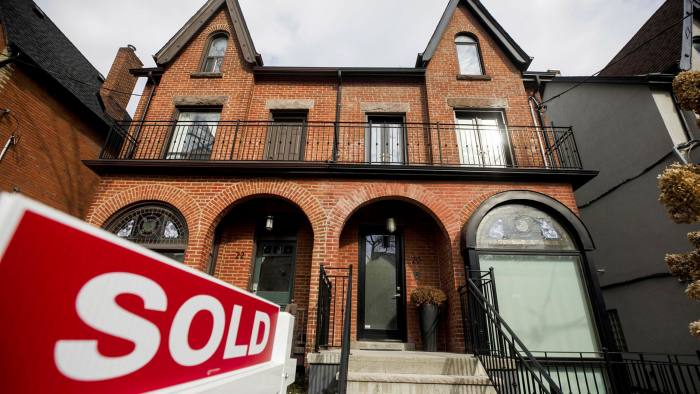 Trying to decide whether Canadas real estate market has peaked has long been a national pastime. And, last year, even the countrys housing agency gave a steer: it warned that a Covid-led correction was imminent and prices could fall by as much as 18 per cent.

This double-digit price growth has put pressure on lawmakers to take action, as home ownership shoots out of reach of many Canadians. Vancouver and Toronto are now among the worlds least affordable cities.

Houses should not be passive investment vehicles for offshore money, argued finance minister Chrystia Freeland in her budget speech. However, economists say blaming foreign investment is false reasoning and tax measures will not counter the main cause of the crunch: too few homes that people want to live in. The big game changer for housing will be an increase in supply, says Frances Donald, the Montreal-based chief economist at Manulife Financial, a Canadian insurer and financial services provider. Incremental measures to reduce demand are unlikely to be successful.

Canada is effectively undergoing a cost of living crisis. The market is not only pricing out young Canadians but could also dent economic competitiveness, she warns. Although Canada has had success in luring highly-skilled workers away from the US, especially in tech, Donald says that less housing affordability could deter foreign workers.

Price rises have been fuelled by record low mortgage rates, after the central banks decision to park interest rates near zero per cent, as well as an insatiable appetite for family homes.

People want more space, Tiff Macklem, Bank of Canada governor, said of the housing market in April. Supply is not responding nearly as quick as demand. While Macklem added that rising prices were still rooted in fundamentals, he expressed concern about speculation and the risk that buyers might overstretch themselves on the assumption that prices keep increasing. Ron Rapp, chief executive of the Homebuilders Association Vancouver (Havan), points to the limited supply of new homes as a dominant factor in the price rises. Data from the real estate association shows the inventory of property for sale is the lowest on record, relative to demand. 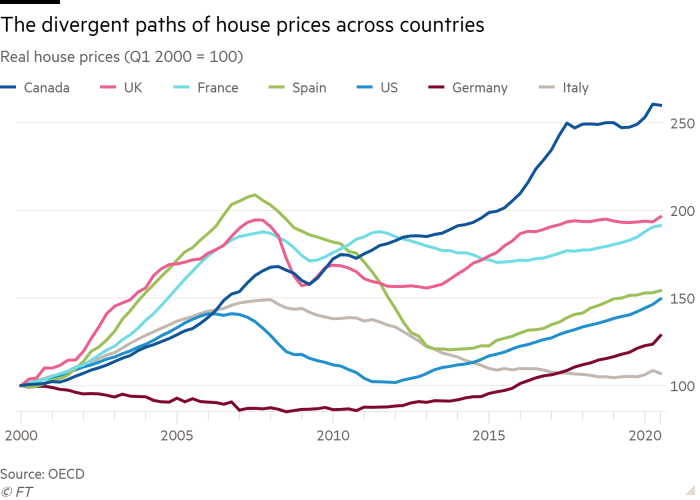 You simply cannot get enough supply into the market fast enough, says Rapp, who notes that Covid-19 has increased labour costs and caused shortages in building materials, such as timber. Canadas cities have also favoured planning policies encouraging urban density, and using greenbelts to reduce sprawl. Yet property buyers still prefer houses, leading to overheated markets in unexpected locations. For example, in February, house prices were up 35 per cent, year-on-year, in Oxford County, Ontario  a largely-rural district near Toronto that claims the title of the dairy capital of Canada, complete with cheese-tasting trail and a statue of a cow. Oxford now leads a cohort of outlying regions  including Chilliwack, near Vancouver, and Niagara, Ontario  that are appealing to urbanites fleeing coronavirus lockdowns in cramped city quarters. This shift to areas giving more space at better prices, with solid transit links to a metropolitan hub, has accelerated during the pandemic. 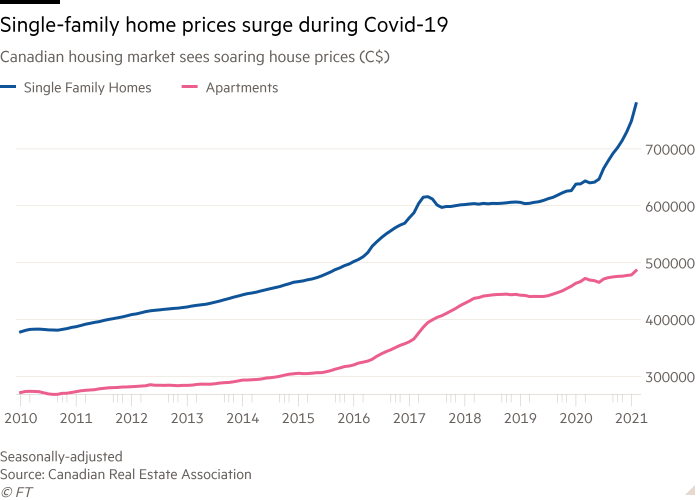 Its these more remote communities that are really on fire, says Peter Norman, chief economist at Altus Group, a Toronto real estate consultancy. Higher prices persist despite an economic backdrop that would normally cool the market, Norman says, with 500,000 more Canadians out of work or on reduced hours compared with pre-Covid levels. Population growth last year hit its lowest since 1945, as immigration stalled. New arrivals made up three-quarters of Canadas annual population growth before the pandemic. Recommended Canada Canada optimism high for consumer-led recovery Some of whats happening right now seems divorced from the fundamentals, Norman suggests.

But while the rise has revived fears of a bubble, history shows that Canadas housing market can prove resilient. Norman says there are only a few examples of regional bubbles bursting since the second world war. Unlike the US and the UK, Canada did not see a reset in prices even after the 2008 global financial crisis, he adds. Still, he admits that risks remain: Property bubbles are easier to look at in the rear-view mirror than ahead.