Swedish House Prices Soar at Their Fastest Pace Ever

Swedens housing market just set another record as ultra-low interest rates and a spike in demand fueled by the pandemic drive prices to levels never before seen in the country.

Home prices rose 18.9% in April from a year earlier, according to the Nasdaq OMX Valueguard-KTH Housing Index, HOX Sweden. Thats the fastest pace since it started compiling data in 2005. On the month, prices rose 0.9%, which is slightly slower than in March, but analysts were quick to warn that the dip is probably an aberration.

There are no clear signals of a further slowdown so far, Helena Bornevall, an economist at Handelsbanken, said in an email. Instead, we see a continued strong momentum. The strong demand for housing is likely to further drive up prices in the near-term, in our view. The question is rather how much.

Riksbank policy makers have repeatedly made clear that theyre worried about Swedens housing boom. Still, the bank has signaled it will keep its main rate at zero into 2024 to help the broader economy deal with the fallout of the coronavirus pandemic. Other policy areas should be deployed to deal with the overheated housing market, Governor Stefan Ingves has said.

Meanwhile, the Riksbanks quantitative easing program has also been blamed by some market participants for adding to imbalances in the housing market, with a large chunk of purchases targeting the covered bonds that finance Swedish mortgages. 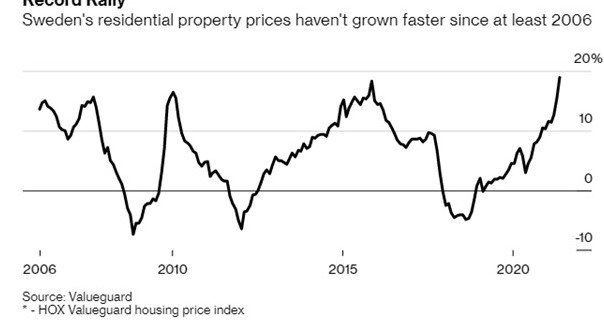 Finance Minister Magdalena Andersson has promised to monitor the price development and said last month the government is looking into adding housing supply with new investments.

We believe that the desire for more living space due to more frequent working from home, also in the post-pandemic world, is here to stay, Maria Wallin Fredholm, an economist at Swedbank, said in a client note.

 With assistance by Joel Rinneby