Nationwides chief executive said everyone had been a little bit surprised by the strength of the housing market during the pandemic. Photograph: Yui Mok/PA

The UKs second largest mortgage lender, Nationwide Building Society, said house prices would continue to rise this year beyond the stamp duty holiday but warned higher costs could make it harder for first-time buyers to get on the property ladder.

Its chief executive, Joe Garner, said everyone had been a little bit surprised by how strong the housing market had been throughout the Covid crisis, even when taking government support, including business loans and wage subsidies, into consideration.

Figures published by the Office for National Statistics this week showed house prices rose 10.2% in the year to March, the highest annual increase since the lead-up to the financial crisis in August 2007.

The building society boss said demand had been underpinned by a structural shift in the kind of homes that buyers were looking for after the pandemic, which has ushered in a home-working boom, and fuelled interest in larger homes with gardens outside city centres. 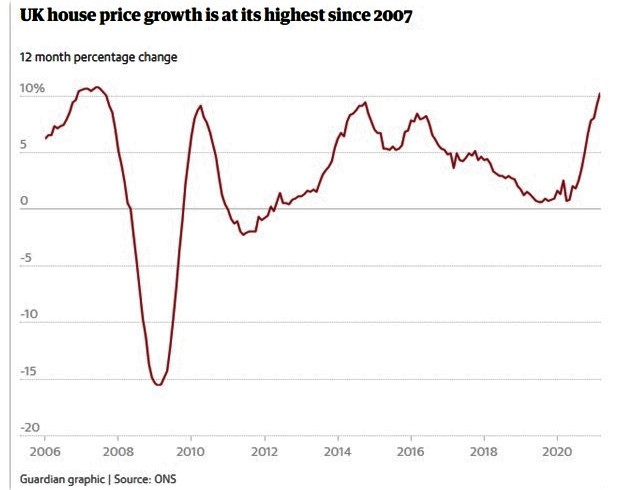 That means the surge in home buying  and house prices  is likely to continue after government incentives such as the stamp duty holiday are wound down.

People dont say: Oh look, theres a discount on stamp duty, lets move home. Thats not how it works, Garner explained. People are thinking of their house less as an investment and more as a home.

A Nationwide survey of homeowners last month found that 25% were either considering, or in the process of, buying a house as a result of the pandemic, compared with 28% in September. Usually, only about 5% of homes switch hands in the UK, meaning that only a small portion of those homeowners need to act in order to keep the housing market moving.

There will be periods when it goes down a bit, Garner said, but particularly as people are buying much more for their long-term home, it doesnt matter so much the day-to-day value of the property if its somewhere they really want to live.

That sentiment is backed up by house-buying data published by Revenue and Customs on Friday. While property purchases were down 38% in April compared with a month earlier, it was still the highest total for April since 2007, with 111,260 transactions.

Nationwides core forecast predicts prices will continue to edge higher over the next five years. Of course thats positive if you own a home today. Its less positive if youre trying to buy your first one, Garner said.

And while a number of lenders have re-entered the 95% mortgage market, making it easier for first-time buyers to come up with a deposit, they could be thwarted by lending caps introduced by the Bank of England in the wake of the 2008 financial crisis.

Lending limits introduced in 2014 cap the amount of home loans worth more than 4.5 times a homeowners income to 15% of a banks total mortgage lending. The central banks deputy governor Sir Jon Cunliffe warned on Thursday that those limits would certainly have a stronger impact if prices continued to surge.

Its very wise to have some safeguards in the market, Garner said. We will all remember what happened in the run-up to the financial crisis and how certain lenders got carried away.

Nationwide has been cautious in its mortgage lending criteria, resulting in a 4% drop in gross mortgage lending to £29.6m in the year to April. However, cost cuts helped the lender to increase its annual profit by 77% to £823m.