There is a £46,800 premium in London for property 500m from the nearest station, compared to a similar property 1,500m (1.5km) away, research from Nationwide shows. 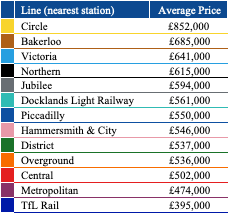 Andrew Harvey, Nationwides Senior Economist, comments: Weve analysed how the proximity to either a metro or railway station has impacted property prices in London, Manchester and Glasgow, after taking account of other property characteristics, such as type, number of bedrooms and local neighbourhood. This latest report is an update of the feature we published in 2019 (available to view online). Our analysis is based on transactions in the period April 2020 to March 2021, and which should therefore incorporate any shifts in housing preferences as a result of the pandemic.

London homebuyers still appear willing to pay a significant premium for being close to a station compared with those in Glasgow and Greater Manchester. This probably reflects the greater reliance on public transport in the capital, with residents less likely to drive.

The pandemic does not appear to have reduced the desirability of being close to a station in London, despite reduced public transport usage. Indeed, our analysis suggests the premium has actually increased slightly compared with pre-pandemic levels.

Weve also seen a noticeable increase in the premium to be located close to a station in the Greater Glasgow area, but in Greater Manchester, homebuyers appear to be placing a little less value on being close to a rail or tram stop compared to before the pandemic.

Londoners still pay a significant premium to live near a tube or train station
Harvey continues: Our research indicates that homebuyers in the capital continue to pay a significant premium to be close to a station. A property located 500m from a station attracts a 9.7% price premium (approximately £46,800 based on average prices in London) over an otherwise identical property 1,500m from a station.

The illustration in the attached shows the price premium for similar properties at various distances from a tube or railway station (relative to a property 1,500m away). As you might expect, the premium buyers are willing to pay increases as you move closer towards a station. A property located 1,000m away commands a 4.3% premium, at 750m this increases to 6.8%, while a property 500m from a station attracts a 9.7% premium.

Our analysis suggests that there has actually been a slight increase in station premiums in London compared with pre-pandemic levels. In 2019-20, a property located 500m from a station attracted an 8.6% premium over a comparable property 1,500m from a station.

It would appear that those buying in the capital continue to value accessibility to rail and tube links. And while public transport utilisation remains well below pre-pandemic levels, TfL reports that the re-opening of shops, pubs and restaurants has helped boost Tube usage.

Which line is associated with the highest house prices?
Harvey comments: The Circle line serves the capitals most expensive areas taking in much of central London and also parts of west London.  Average house prices are around £850,000 in areas where the nearest station is on the Circle line.

Of all the London Underground lines, average house prices are least expensive where the nearest station is on the Metropolitan line.  This probably reflects that it stretches towards the outer suburbs, with only a short section in central London.

The lowest average house prices amongst TfL served routes are currently found where the nearest station is operated by TfL Rail, ahead of the introduction of Crossrail services. TfL currently runs services from Liverpool Street to Harold Wood (and onward to Shenfield in Essex) and from Paddington to Heathrow Airport (via Ealing) and also to West Drayton (and onward towards Reading in Berkshire).

The lower prices for TfL Rail may reflect that most of these stations are outside of central London and that delivery of the Crossrail project remains behind schedule.

Increase in premium for rail links in Glasgow

Harvey comments: Glasgow has the largest network of suburban railway lines in the UK outside of London. Within the Greater Glasgow area there are around 155 railway stations with a further 15 subway stations in Glasgow city centre.

Interestingly, it appears that homebuyers are now willing to pay a greater premium to be close to a railway or subway station compared with the pre-pandemic period.

It is perhaps surprising that the premium for transport links in Scotlands largest city has increased despite the reduction in public transport usage. But it would appear to suggest that those who are buying do still value these links and expect to use them again in the future.

Indeed, pre-pandemic, Glasgow and the surrounding area saw a much higher proportion of people using trains to travel to work than other parts of Scotland.

The districts best served by the network include Glasgow City, Inverclyde and West Dunbartonshire, where around 90% of properties are within 1.5km of a station. Both the latter contain many of Glasgows commuter towns and villages and are well connected by the main railway lines skirting the River Clyde.

Tram & rail links in Greater Manchester attract premium amongst homebuyers
Harvey comments: Greater Manchester is served by an extensive network of railway and tram lines. Recent years have seen a further expansion of the Metrolink network to Manchester Airport and the opening of the Second City Crossing and most recently the Trafford Park line.

Our research suggests that while homebuyers are still willing to pay a premium to be close to either a Metrolink or railway station, this has fallen since the onset of the pandemic.

A property located 500m from a station attracts a 6.1% price premium (approximately £11,000 based on average prices in the region) over an otherwise identical property 1,500m away.

Our analysis suggests this has fallen from pre-pandemic levels when the premium was as high as 9.0% (based on transactions in 2019-20). While we cant be certain why the premium has fallen, it is possible that priorities for homebuyers in the Greater Manchester area have changed during the pandemic, with a greater emphasis placed on things like local amenities and access to outdoor space.