With house prices through the roof, young buyers hopes go out the window


With house prices through the roof, young buyers hopes go out the window
Phillip Inman

But with government more keen on avoiding a crash than addressing inequality, property prices look safe 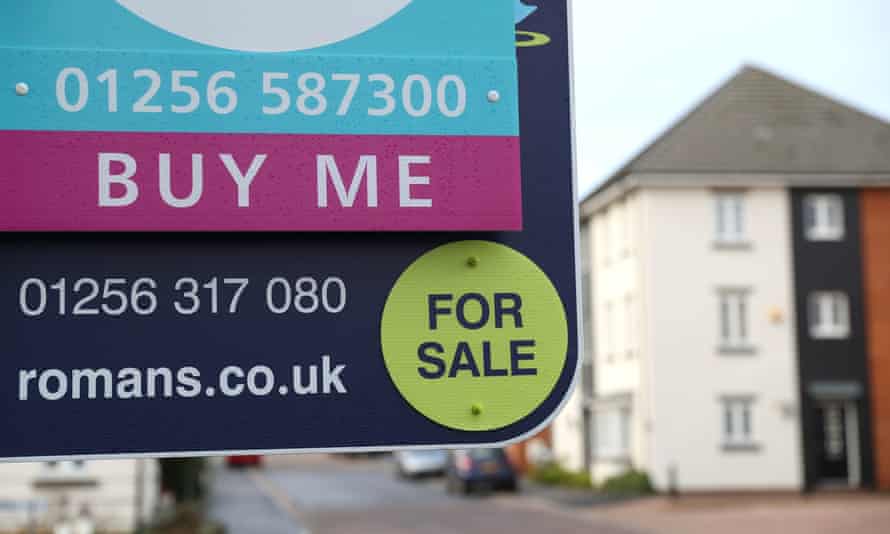 Board outside a house for sale in Basingstoke, Hampshire. Photograph: Andrew Matthews/PA

House prices are soaring and gazumping has returned in property hotspots. The average cost of a home jumped by 13.4% in June from the same month last year, according to Nationwide building society.

This is more than four times the 3% annual rate of growth in wages during April and more than six times the 2.1% increase in consumer price inflation (CPI) registered in May. According to upmarket estate agent Knight Frank, figures out next month are likely to show sales across Britain hitting an all-time record.

Despite all the turmoil sparked by the pandemic, some things have remained the same, and one of them is the British obsession with property. While the order for millions of workers to stay at home looks set to alter their view of how and when to work, and a desire to be green will temper their consumption habits and holiday destinations, the love of bricks and mortar remains supreme.

Lots of people  and not just the wheeler-dealers who clutter the Sunday Times rich list  have become very wealthy from residential property. Shares in housebuilders have soared since 2012 when then chancellor George Osborne propped up the market for newly built homes with his help-to-buy scheme. Persimmon, the UKs second-largest housebuilder, has seen its shares increase sixfold in the past 10 years, from £5 to £30. The shares are currently worth double their pre-financial-crisis peak of £15.

£10bn of help-to-buy subsidy has done nothing to make homes more affordable for first-time buyers
Pension funds have profited from owning these shares and done little to stop the builders top bosses from being awarded bulging bags of cash. In 2017, former Persimmon chief executive Jeff Fairburn was awarded £110m, which he said he would share with a new charitable trust. In February this year the Guardian revealed he had to that point kept it all to himself.

Studies confirm that all the taxpayer subsidies have done is line the pockets of the industry, but it doesnt seem to matter. As long ago as 2017, investment bank Morgan Stanley calculated that £10bn of help-to-buy subsidy had done nothing to make homes more affordable for first-time buyers, which was the intention, but had instead disappeared into the bank accounts of the industrys dominant businesses.

There is also only a slender link between more homes being built and prices falling. As long as property is viewed as an investment, the demand is there.

Osborne is one of those to have gained from our buoyant property market. He bought a home in 2006 in Londons Notting Hill for £1.85m and sold it earlier this year for £3.95m.

At 50, Osborne is at the bottom end of the age range for people who have played and won on the property wheel of fortune, not least because the older generation has the resources to put down deposits on second, third and fourth homes. The Intergenerational Foundation has shown that the proportion of over-65s who own their home has risen this century, while it has fallen in all other age groups.

Economists worry about the inequality created by rising property prices, though their main focus is on the instability this creates and the potential for disastrous  and costly  recessions.

The Geneva-based Bank for International Settlements (BIS), which advises the worlds central banks, said in a report last week that all major economies needed to be mindful of rising property prices becoming detached from wages. It warned that when ordinary homes were out of reach of people on average wages, it caused a bubble that might one day burst.

This we know from bitter experience. What we also know is that the central banks of all the major economies have pledged to do whatever it takes to prevent a property slump. A dip is OK, but a major correction would be too damaging. The last one is fast disappearing in the rear view mirror. It was in 1989-90.

Threadneedle Street is concerned at the sheer weight of spending connected to property, from furnishings to new patios. Outside the humming property market, a good chunk of the economy is moribund.

There is support from ministers concerned that older, property-owning voters will turn against them if prices are allowed to dive. From the ministers perspective, it helps that interest rates are almost zero, and have been since the crash of 2008.

The BIS wants central banks to plan for interest-rate increases some time over the next five years to choke off the current boom.

Maybe rates will rise slightly over that time, but not by enough to trigger a housing crash. That cannot be allowed to happen: the economy and Tory politics say so.