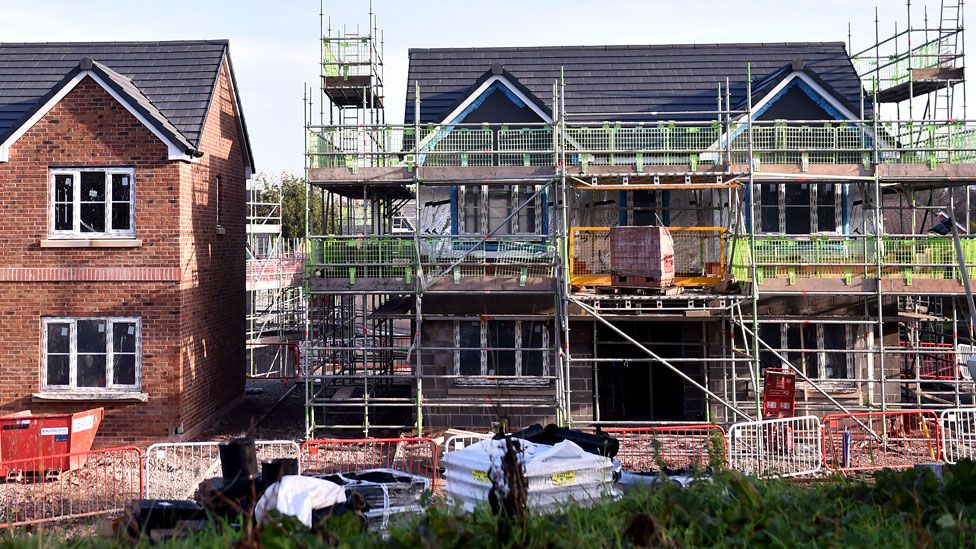 New homes being built in the UK

A lack of available properties is helping to push up house prices, surveyors say.

As a result, a majority of Royal Institution of Chartered Surveyors (RICS) members think prices will continue to rise over the next year.

The shrinking supply meant the number of new properties coming to the market fell by a third in June.

But with no let-up in demand, all parts of the UK continued to report robust increases in house prices, RICS said.

"Respondents are pretty unanimous in once again highlighting the challenge around supply, whether in the sales or rental markets," said Simon Rubinsohn, RICS chief economist.

With demand increasing and supply continuing to falter, a net balance of 83% of surveyors reported an increase.

Looking ahead, a net balance of 56% anticipated that prices will continue to increase over the next twelve months.

But a shortfall in new landlord instructions intensified with a net balance of -32% of surveyors reporting a decline in supply.

Surveyors predicted rental growth would grow slightly as a result, suggesting a 3% rise over the coming twelve months, including in London, where the rental market has bounced back since a RICS assessment earlier in the year.

Sharp rises
There were notable sharp house rises in Yorkshire & the Humber, Northern Ireland and Wales, according to surveyors.

Ben Hudson, York surveyor reported: "The busiest sales month on record with the push towards the end of June stamp duty deadline."

How much stamp duty will I have to pay now?
In Haverfordwest in Wales, Paul Lucas said: "The sales market is currently extremely buoyant with buyers moving to Pembrokeshire from both England and many parts of Wales."

But London is presenting a different picture, said Allan Fuller, Putney surveyor. "New buyer enquiries have reduced except for larger houses where demand remains strong, as opposed to flats," he said.

Mr Rubinsohn said the government needed to continue to help increase the supply of new homes.

"While the role of the credit channel and the extended period of ultra-low interest rates can't be ignored, it is critical the government is able to create the conditions to support higher levels of new build development to address the worsening affordability challenge," he said.

But he added homes are "needed across all tenures", including social and private rent alongside home ownership.

A spokesperson for the Ministry of Housing, Communities and Local Government said "decisive action" was being taken to ensure the country had the new homes and ownership options needed.

"We delivered more than 243,000 homes last year - the highest in over 30 years and the seventh year in a row with an increase," the person said.

The department also pointed out the government had reformed the planning system, and that measures such as Help to Buy and shared ownership were in place.