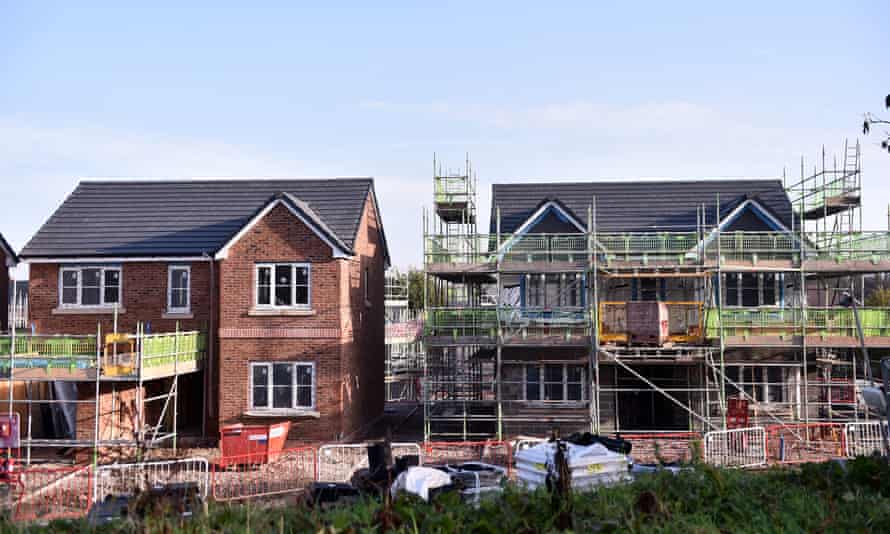 Restrictions are not the main barrier to housebuilding in Britain  so why is the government so set on loosening them?

Repeated government reviews and politicians from both parties have consistently identified land banking rather than a restrictive planning system as the key barrier to supply-side solutions. Photograph: Nathan Stirk/Getty Images

The government response to soaring inflation is to promise to build more homes at speed by loosening the planning system. It is a supply side solution, which sounds logical: rapidly increase the number of homes being built and prices will inevitably come down. It is a highly contentious approach, which cost the Conservatives the Chesham and Amersham byelection, but it sounds as if it should work.

The problem is that the housing market does not function like a pure market, and while the UK does have some of the highest prices in the world the affordability crisis is not a peculiarly British issue; its a global problem, with an index by the property consultants Knight Frank revealing that global residential prices have risen by more than 60% in the past 10 years.

Cities around the world, from Auckland to Vancouver, are facing an affordability crisis, with huge price rises and extreme gentrification in cities linked to global capital flows and foreign investment rather than local circumstances. This ensures that increased supply will not bring prices down; the new luxury apartment complexes that now characterise British cities such as London, Manchester, Bristol and York, to name but a few, remain out of reach for the majority of house buyers. Many are sold off plan, straight to foreign investors, before they have even been built.

The flood of global capital into cities followed the financial crisis and has been driven by low or negative interest rates, the growing dominance of global private equity in real estate and quantitative easing, the policy of creating trillions of pounds of electronic money pursued by the Bank of England, the Federal Reserve and the European Central Bank. In the UK £445bn was created between 2009 and 2016, which went disproportionately into the hands of the richest, who ploughed it disproportionately into property. Between March and November 2020, a further £450bn was funnelled into the economy, which is predicted to have a similarly distorting effect on the housing market.

The irony is that while house prices have soared around the world, they are generally left out of central banks calculations on inflation. In the UK, food, clothes, furniture, cars and holidays are all included in the governments preferred inflation index, the consumer price index (CPI), but house prices are not. The European Central Bank is looking at measuring the role of housing in the rising cost of living in a forthcoming strategic policy review, but there is little likelihood of the UK doing the same.

This is the global context for our extreme housing crisis, which is further fuelled by local circumstances. Chief among these are a private sector lacking incentives to produce more housing, and a social housing sector that builds very limited amounts of social and affordable housing. Margaret Thatchers defining policy of right to buy, under which more than 2m council homes were sold, continues to decimate the dwindling amount of affordable housing in England, although Scotland and Wales have halted the policy. In 1978, the year before Thatcher came to power, the government built 100,000 council homes, the private sector built 150,000 and there was no shortage of housing. Since then, private sector housebuilding figures have failed to make up the shortfall despite repeated policy incentives, such as starter homes, which have contributed to a limited rise in building but added further inflationary pressures by increasing mortgage credit.

Housebuilders are businesses accountable to their shareholders, and it is well documented that it is not in their interests to flood the market with homes, as it would damage their profits. Instead they control the rate of production and trickle out limited numbers of homes from large developments to keep prices high. As a result, repeated government reviews and politicians from both parties have consistently identified land banking rather than a restrictive planning system as the key barrier to supply-side solutions. There is also little incentive to build high-quality, larger homes, leaving the UK with some of the smallest homes in Europe, with the most attractive sites for developers in city centres suited to small luxury apartment developments that generate high income.

If there is widespread recognition that the planning system is not the main barrier, why are the governments reforms so focused on loosening restrictions? This is partly because its a voter friendly idea outside of the Tory shires and popular with free-market Conservatives, while the interventionist policies required to genuinely affect house price inflation are seen as ideologically unpalatable.

Canada and New Zealand, which have witnessed some of the fastest house price rises in the world, have introduced policies to dampen demand from foreign investors. Canada has proposed a new tax on foreign investors and restrictions on mortgage credit, while New Zealand has instructed its Reserve Bank to consider house prices in making monetary policy decisions. Solutions involving the public sector are equally hard to envisage, such as a public housing programme or large-scale new housing developments enabled by the municipal purchase of land, which underpinned the creation of the postwar new towns and remains the European model for development.

The chief obstacle, which is also widely acknowledged in policy circles, is that there is no real desire for property prices to fall as housing investment has a direct bearing on GDP, economic growth and confidence in the economy. The paradox is that millions of individuals and families under the age of 45 may be excluded from the housing market, but millions of older voters inclined to vote Conservative stand to gain from an ever-appreciating asset.

The growing consensus is that the planning bill is unlikely to survive in its current form as it is so unpopular with swathes of Conservative MPs in vulnerable shire constituencies. The result is planning reforms that were unlikely to make a substantive difference in the first place are likely to be significantly watered down. In this way, a government claiming to liberalise the planning system can appeal to its free-market wing, while also appeasing the no-development lobby in the shires. It may be clever politics, which produces a lot of noise about the need to build, but it obscures the causes of the housing crisis instead of addressing them.

Anna Minton is the author of Big Capital: Who is London For? and reader in architecture at the University of East London