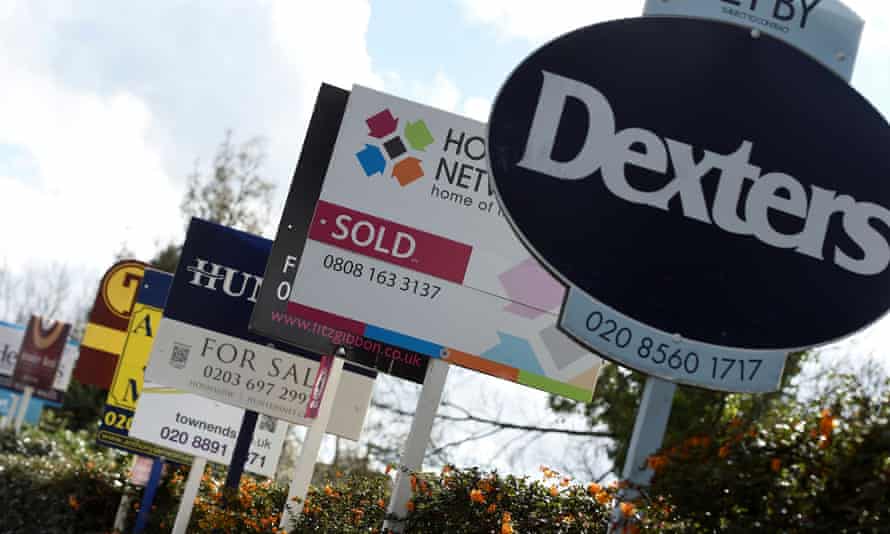 Months of frenzied buyer activity have driven the average asking price for a home in Britain to a new high, according to the property website Rightmove.

The property portal said it expected figures from HMRC due later this week to show that June was the busiest month on record for sales, with buyers rushing to complete before stamp duty rules change in parts of the United Kingdom.

On 30 June, a temporary tax break on the first £500,000 of the cost of a residential property in England and Northern Ireland began to be phased out, with the threshold cut to £250,000. Wales ended its temporary tax break entirely, while Scotlands had finished at the end of March.

The housing market has been boosted by the tax holiday, together with buyers appetite to move after lifestyle shifts during the pandemic, driving up prices and activity in most parts of the UK.

An estate agent Sold sign outside a terraced house in London. An average property cost £254,624 in May.
UK house prices rise by 10% amid stamp duty holiday rush

Rightmove, which lists properties of 90% of estate agents, said the first six months of the year had been the busiest it had recorded since 2000, pushing up the average price of homes coming on to the market in England, Wales and Scotland to £338,447  an increase of £21,389, or 6.7%, since the beginning of 2021.

While buyers have rushed to snap up homes and take advantage of the stamp duty break, Rightmove said that sellers had been scarcer. In the first half of the year, 140,000 more sales were agreed than the long-term average, but there were 85,000 fewer new listings. This made for a shortfall of 225,000 properties on the market, the company said.

This stark shortfall, along with frenzied buyer activity, is fuelling record high prices and leading to record lows in available stock for sale, Rightmove said.

With high activity levels continuing despite the June stamp duty deadline now passing, there is an urgent need for these low stocks of property for sale to be rebuilt in order for price stability to return.

Marc von Grundherr, a director of the estate agent Benham and Reeves, said: The UK property market continues to defy expectation, with house prices reaching yet another record high despite whispers of a decline in values as a result of the tapered stamp duty holiday deadline. Theres no doubt the stamp duty holiday has been the catalyst for this impressive market performance.

However, it isnt the driving factor behind the intent to purchase for UK homebuyers, and so a robust level of activity will remain long after it has expired.