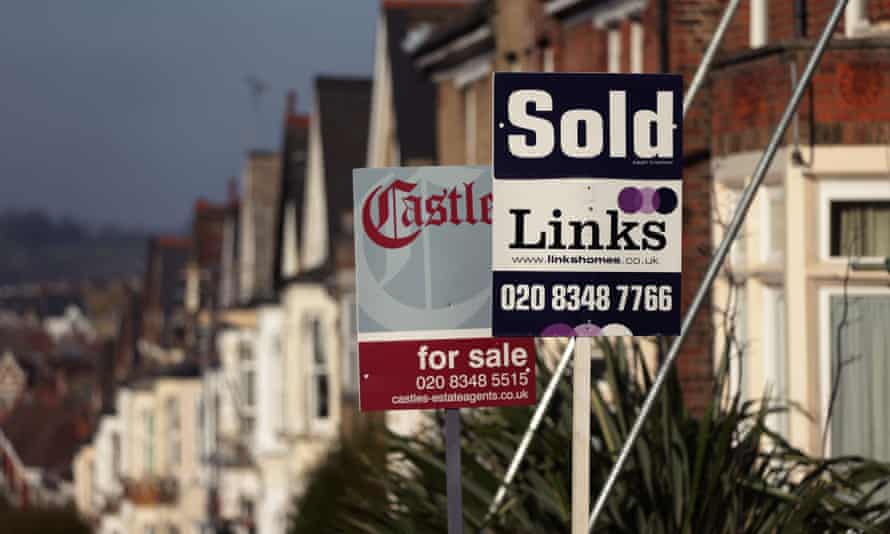 Impending halt to tax break on Friday cools market to 0.1% growth in September

The average price of a house in the UK is £248,742, about 13% higher than before the pandemic began. Photograph: Yui Mok/PA

UK house price growth slowed in September as economists said the looming end of the stamp duty tax break had cooled the market after a period of extraordinary growth.

The average price grew by just 0.1% over the month to £248,742, a sharp slowdown compared with growth of 2% in August, according to Nationwide.

The UKs largest building society said annual house price growth fell back to 10%, down from 11% in August. That was down from annual growth of more than 13% as recently as June, the fastest since the property boom in 2004.

The average house price on Nationwides measure is about 13% higher than before the pandemic began in early 2020. During the initial Covid lockdowns the market shut down completely, but it roared back after restrictions were lifted as some households found they had increased savings coupled in many cases with a desire for more space.

Price growth was also accelerated by the introduction and repeated extension of a cut to stamp duty land tax, brought in by the chancellor, Rishi Sunak, in July 2020 to sustain the housing market. The threshold at which stamp duty will be paid in England and Northern Ireland will fall from £250,000 to £125,000 on Friday, finally returning it to the pre-pandemic level after repeated and controversial extensions. The Scottish and Welsh devolved administrations ended relief for equivalent taxes earlier this year.

The Nationwide data shows the start of a period of relatively restrained growth in house prices as the stamp duty effect fades, said Gabriella Dickens, a senior UK economist at Pantheon Macroeconomics, a consultancy. 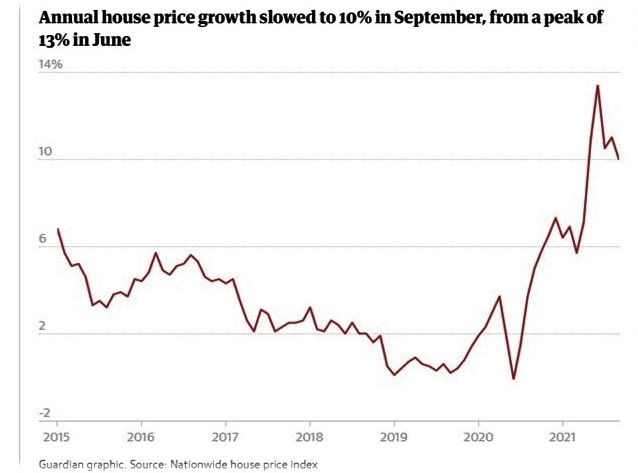 Alongside the stamp duty rise, Dickens added that the impact of rising inflation on real disposable incomes was also likely to dent house price growth further.

However, many economists believe prices are likely to be sustained in the coming year by continued low interest rates and constraints on supply from the lack of new housebuilding.

Andrew Wishart, a property economist at Capital Economics, another consultancy, said house price growth will cool gradually rather than collapse.

That will leave little prospect of increasing affordability. Nationwides analysis showed that the cost of a typical mortgage as a share of take-home pay was above the long-run average in 10 of 13 UK regions, up from only one before the pandemic.

Robert Gardner, Nationwides chief economist, said: House prices have continued to rise more quickly than earnings in recent quarters, which means affordability is becoming more stretched. Raising a deposit remains the main barrier for most prospective first-time buyers. A 20% deposit on a typical first-time buyer home is now about 113% of gross income  a record high.

Gardner added that activity is likely to soften after the stamp duty increase, while underlying demand could also fall around the turn of the year if unemployment rises as government support, including the end of the furlough scheme on Thursday, winds down. However, he added that this is far from assured, given the surprising resilience of the pandemic labour market.

This article was amended on 1 October 2021 to clarify that the stamp duty threshold change mentioned applies in England and Northern Ireland only.