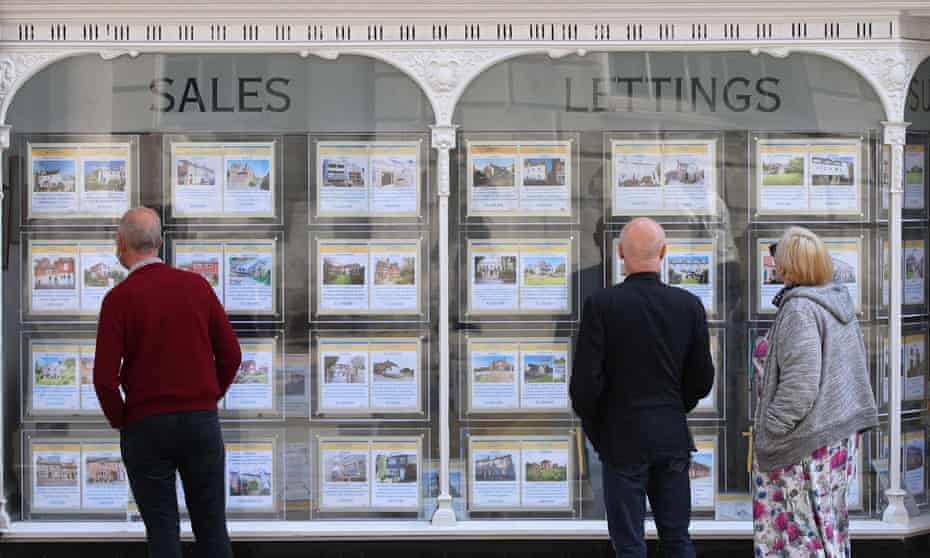 People looking at house price signs displayed in the window of an estate agents.

Abuoyant private sector housing market is one of the key building blocks of economic activity. Thats the view inside the Treasury and nothing in the last 50 years  not the widening wealth gap, nor the risks that come with increasing dependency on an unstable asset market  has happened to shake that view.

After every recession, even when a property crash has been the cause, officials in No 11 dip into their toolkit of recovery measures and opt for a tried and trusted method to get the economy back on its feet.

Even more crudely, ministers use the incentive of higher house prices to kickstart what they really want to see, which is more transactions.

Thats why Rishi Sunak reacted to the pandemic by cutting stamp duty on house purchases to zero on homes worth under £500,000. The effect can be seen in the latest Nationwide house prices figures, which show the average UK house price hit £252,687 in November, up 10% on a year earlier.

Advertisement
Sunaks mission was supported by high street lenders that cut their margins to the bone, with the aid of ultra low interest rates from the Bank of England, to maintain market share.

It worked to pull forward transactions and save from hardship a financial system that depends on mortgage sales, but at the cost of the same continued reliance on a mortgage-dependent financial system and widening an already yawning property wealth gap.

Some commentators expected the direction of travel for prices would moderate or even reverse. The Office for Budget Responsibility, the Treasurys independent forecaster, predicted in October that house price growth would fall once the stamp duty subsidy was phased out in the autumn to just 0.5% in 2023.

It may be too early to call, but a 10% annualised increase in November would indicate this forecast is flawed and the market has adjusted quickly to life without subsidy.

In the main, speculative sellers  who could be private new build developers or individuals prepared to sell at the right price  have withdrawn homes from the market to match the lower level of demand.

Sales were 28% down in October from the previous month and likely to remain depressed in November and at least until the threat from Covid has lifted.

That must mean Sunak emerges from the pandemic with turbo-charged house price inflation without the transactions that underpin a healthy housing market.

Vaccine hoarding resulting in haphazard, stop-start recovery
It is tragic that months of work by businesses and governments sorting out global supply chains, an effort that was visibly making progress during the autumn, will be dashed if Omicron turns out to be a vaccine-defeating strain of Covid-19.

Hold-ups at ports had eased and retailers were expecting to fill large numbers of empty shelves before the Christmas rush. Now they are not so sure.

In its forecasts for 2022, the Organisation for Economic Co-operation and Development (OECD), says it cannot tell how Omicron will affect the broader recovery.

It can say that some disruption to supply chains is likely and that means shortages running into next year. Inflation, which at 4.2% in the UK is already more than double the Bank of Englands 2% target, is likely to stay high for longer, as will the inflation rates of most developed countries.

The Paris-based adviser to the 38 mostly wealthy countries said keeping the recovery strong and on track will entail addressing a number of imbalances, but above all it will mean managing the health crisis through better international coordination, improving health systems and massively stepping up vaccination programmes worldwide.

This message is still unheeded. Even from a selfish perspective, richer countries might have avoided yet another mutation of Covid-19 if more vaccination doses were available in South Africa.

International coordination is supposed to be happening at the World Trade Organization where this week delegates from the global south wanted rich countries to waive vaccine patents, forcing Pfizer, Moderna and other high-charging vaccine makers to be more charitable than they have been so far.

Talks are deadlocked while the EU and UK play leading roles in blocking the waiver.

The OECD cannot impose sanctions on its members for working against its advice. It can only urge them to share the vaccine as part of a more thoughtful and strategic recovery from the pandemic.

At the moment, its forecasts for the recovery are based on the haphazard, stop-start recovery borne of vaccine hoarding.

OECD chief economist Laurence Boone said the lack of global coordination on vaccine deployment  was putting all of us at risk.

The UK is among the countries that pays Boones wages. Sadly, that doesnt mean it is listening to her wise words.