Four regions of the UK saw house prices grow more this year than in the two years before combined, according to the property portal Zoopla.

House prices increased in every UK region, it said, with almost all seeing prices rise more in 2021 than they did in 2019 and 2020 combined.

The only exceptions were London and Scotland, where annual growth reached 2.4 per cent and 5.3 per cent respectively compared to a national average of 7.1 per cent. 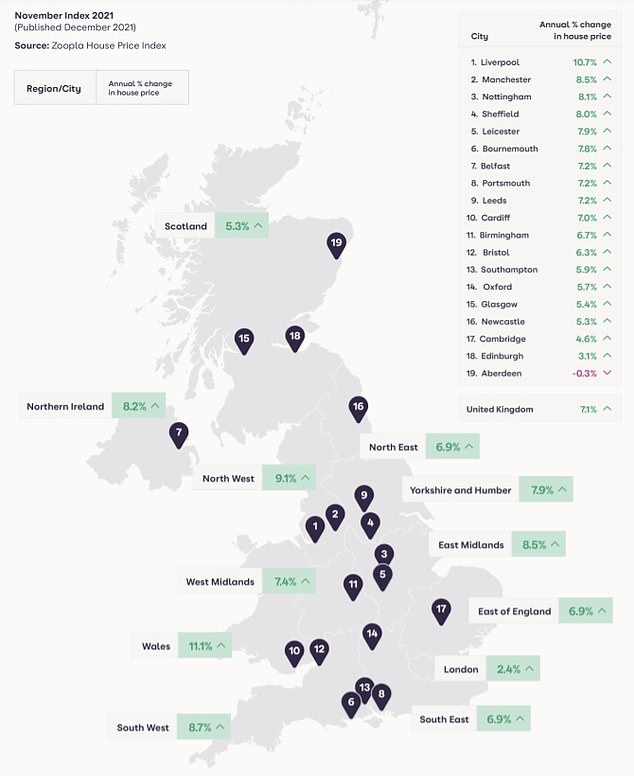 Of major UK cities, Liverpool saw the highest rate of house price growth in 2021 at 10.7%

In contrast, average prices in Wales have risen by 11.1 per cent over the last 12 months, while prices in the North West are up 9.1 per cent, Zoopla said.

It predicted price growth of 3 per cent for 2022, with transactions levels at 1.2m, down from 1.5m this year but in line with trends over the previous five years.

According to Zoopla's data, the typical UK home gained £16,000 in value in 2021, taking it up to nearly a quarter of a million pounds.

However, other indices recorded different figures, with Halifax for example stating that the average house price surged by £20,000.

This is because different indices draw on different sources of data, with mortgage providers using their own lending and Zoopla using a combination of sold prices, mortgage valuations and data for agreed sales.

However, average house prices rose by only 1 per cent in November, suggesting that growth is beginning to slow.

Across 2021 as a whole, 5million homes  approximately a fifth of privately owned properties  saw their value surge by more than £35,000.

The total value of UK housing has increased by £670billion to £9.5trillion, it said. 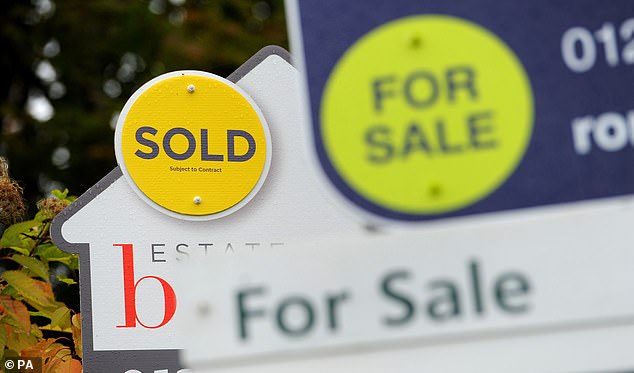 Top risers: House prices in the South East, South West, East of England and the North East saw some of the biggest increases this year, according to the property portal Zoopla

Liverpool registered the highest rate of growth of any of the UKs larger cities this year at 10.7 per cent, followed by Manchester at 8.5 per cent and Nottingham at 8.1 per cent.

The local authority registering the highest rate of growth is Carmarthenshire in Wales, at 13.2 per cent.

Zoopla attributed this to the growing appeal of more rural and coastal locations during the pandemic, as well as it being one of the most affordable housing markets in the country. 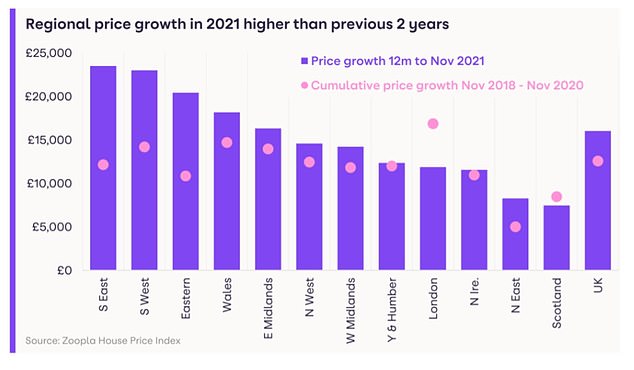 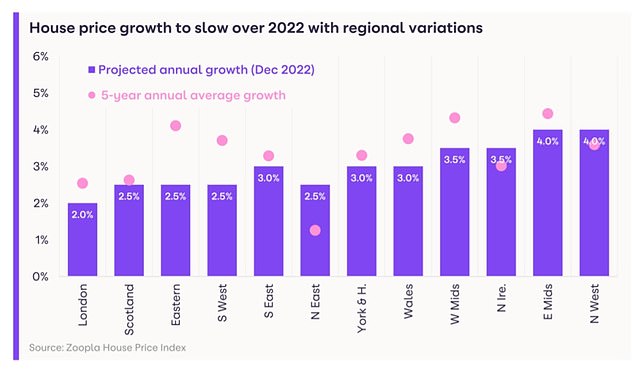 Zoopla said house prices would not grow as rapidly in 2022, predicting an overall 3% rise

Only Aberdeen underperformed London, with average prices in the city down 0.3 per cent on the year.

The city's housing market often fluctuates as it is heavily influenced by wider trends in the North Sea oil industry.

Home moves peaked in June 2021, when more people moved into a new property than in any month since 2005 when Zoopla's records began.

Price rises have been driven by intense competition for homes, as the number of properties coming to the market has been consistently outpaced by the number of potential buyers, leading to bidding wars.

The stock of homes is down by a third (33.2 per cent) compared to this time last year, Zoopla said.

The property portal also said the pandemic continued to drive housing market activity, as homeowners reassessed their housing needs in light of things like working from home and commuting less frequently.

'The impetus for moving continues to be a demand for more space - an extra bedroom or larger garden - and the change in working patterns for those who are in office-based employment,' it said.

Mortgages also continue to be available with very low fixed rates, though these are poised to edge up due to the Bank of England's decision to increase the base rate from 0.1 per cent to 0.25 percent. It could be increased further in 2022.

'But the Bank of England's decision last week to raise the base rate to 0.25% is likely to stir the pot. Already, we've seen the likes of Santander, Nationwide and NatWest announcing a mortgage rate hike in response.

'However, good deals remain on the market so it's important that buyers shop around to secure the best mortgage to suit them.' 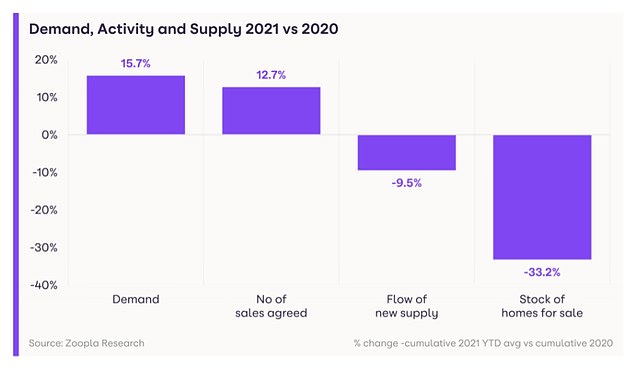 Earlier in 2021, buyers were also being spurred on by the stamp duty holiday, which allowed them to pay up to £15,000 less in taxes when moving home, though the move also served to drive up house prices.

While buyer demand, sales and new listings have slowed in recent weeks, Zoopla said this was to be expected around the Christmas period.

It said the market would bounce back following the festive season, predicting a 'Boxing Day bounce' as buyers began to consider their plans for the year ahead.

However, it said that ultimately the market would see a 'normalisation' in the first half of 2020 which would allow the number of homes available per interested buyer to increase.

Grainne Gilmore, head of research at Zoopla, said: 'This year has been a record year for the market, with the stamp duty holiday and the pandemic-led 'search for space' among homeowners resulting in the highest number of sales since before the financial crisis, with 1.5million transactions.

'However such a busy market eroded the number of homes available to buy, as properties were being snapped up so quickly.

'This imbalance between demand and supply has put upwards pressure on prices.

'The uplift in equity may act as a spur for more households to consider a move in 2022, further boosting the seasonal post-Christmas bounce in activity that traditionally occurs before the New Year.'