By ED MAGNUS FOR THISISMONEY.CO.UK

Bristol has been named the UK's best city to be a buy-to-let landlord, thanks to its healthy house price growth and high proportion of renters.

Following closely behind Bristol, the prestigious university cities of Oxford and Cambridge were ranked second and third.

This was according to specialist buy-to-let mortgage lender Aldermore's Buy-to-Let City Tracker, which ranks 50 cities based on how desirable they are for buy-to-let investors.

Manchester, which was awarded top spot last year, dropped to fourth due to having more vacant properties than last year, and a fall in the proportion of residents renting. 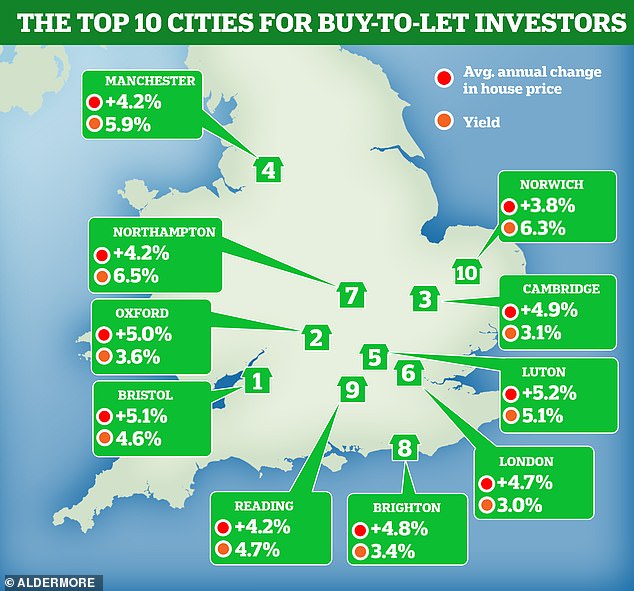 Number one: Bristol has been named as the best city in the UK to be a buy-to-let landlord. This was according to the bank and mortgage lender Aldermore's Buy-to-Let City Tracker

Factors taken into account in Aldermore's rankings include the average rent, the rental yield, house price growth over the past decade, the number of vacant properties relative to the total housing stock, and the percentage of the city population that rents.

One of Bristol's main selling points for landlords is that it has returned solid house price growth over the past decade.

This means property prices have grown by 5.1 per cent each year. The only city to perform better in this respect was Luton.

Bristol was also one of the best cities for rental demand, with only 0.6 per cent of its housing stock left vacant on average over the past year. This was equalled only by Oxford.

More than a quarter of Bristol's residents are estimated to be privately renting, creating a large pool of tenants for buy-to-let landlords to pick from. 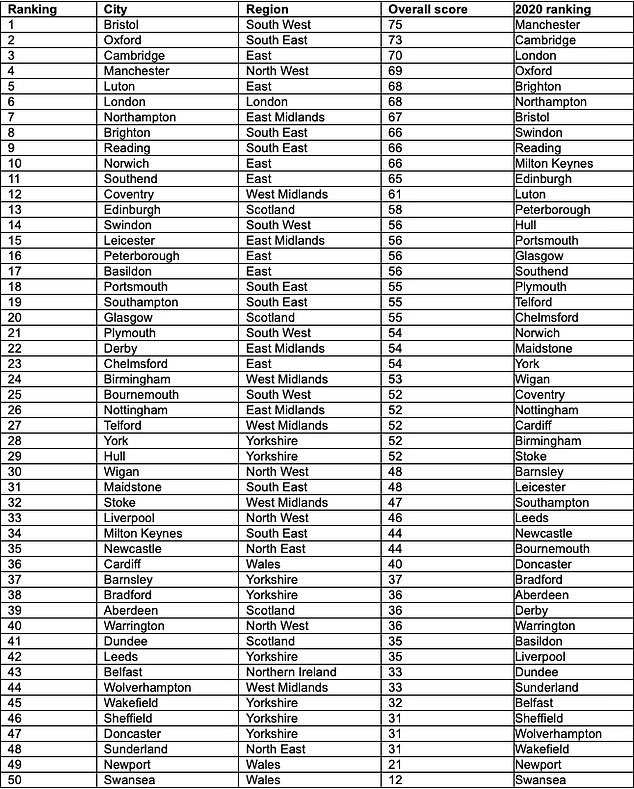 Alexandra Tan, regional lettings manager at Andrews Property Group said: 'The lettings market in Bristol is extremely buoyant at the moment with high demand across the board and this hasn't gone unnoticed by buy to let investors, who see huge investment potential in the city.

'Bristol is appealing to young professionals and families who are relocating from cities such as London. Many are looking to rent short-term while they find somewhere to buy.

Bristol is appealing to young professionals and families who are relocating from cities such as London. Many are looking to rent short-term while they find somewhere to buy
Alexandra Tan of estate agent Andrews Property Group

'There is also a huge student population of around 50,000 in the city, which means there is strong demand for quality student properties.'

However, buy-to-let landlords considering Bristol, they may find that the yields on offer are not quite as enticing as other cities.

With the average property price in Bristol at £348,543 and average annual rents at £16,037, the typical yield an investor can expect on their purchase is 4.6 per cent.

The rental yield is the percentage return a landlord can expect to make back on the purchase price each year.

Based on Aldermore's analysis, buy-to-let opportunities in southern cities appear to be more lucrative than elsewhere in the UK.

Over the past 10 years, those who invested in buy-to-let in southern cities have reaped the rewards of considerable house price growth.

For example, second-placed Oxford and third-placed Cambridge have given property investors an annual return of 5 and 4.9 per cent respectively, through house price growth alone.

Both cities also benefit from a very low levels of vacancies (0.6 and 0.7 per cent respectively) combined with a high proportion of residents who rent privately  29 per cent in both cases.

London, which has continued to fall down Aldermore's league table in recent years, still comes in sixth, thanks to the relatively high proportion of private renters in the capital.

As many as 29 per cent of the city's population rent privately  second only to Bournemouth where 35 per cent of people rent.

However, high house prices mean the yields on offer in most of the top ten cities are comparatively low.

Oxford, Cambridge, London and Brighton offer yields ranging between 3 and 3.6 per cent, which are lower than any other city on the tracker.

For those seeking higher rental yields, Glasgow and Hull are offering average rental yields of 9.4 and 8.9 per cent respectively. 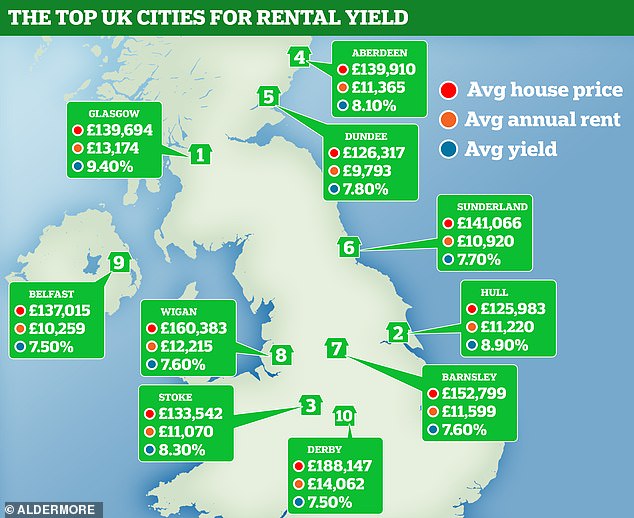 Investors looking for strong yields could be tempted to explore further North. Glasgow offers typical rental yields of 9.4 per cent, for example, and Hull 8.9 per cent

Hull currently has an average house price of £127,344, which means it is also the most affordable city of all the 50 locations included on the tracker.

However, properties with higher yields are often seen as higher risk, as they are commonly in locations where landlords might find it harder to re-let or sell the homes if they needed to.

Capital gains on the rise in Northern cities

Furthermore, there is some indication that property prices in certain cities that have not enjoyed house price growth over the past decade might now be starting to pick up.

Liverpool, which finds itself 33rd on Aldermore's index, has seen 10.6 per cent house price growth in the past year alone, according to Zoopla's latest Hometrack report. 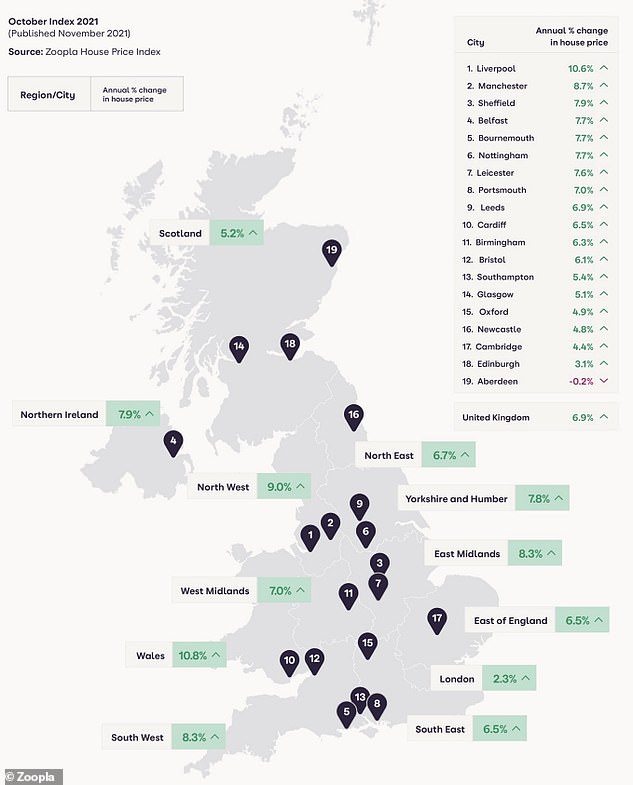 Cities in the North West, East Midlands and Yorkshire and Humber regions have recorded some of the highest property price growth over the past 12 months

Those investing in Liverpool can achieve 7.3 per cent yields, according to Aldermore's analysis.

However, the city has a relatively high long-term vacancy rate of 2.2 per cent, suggesting that investors need to ensure they do their research before buying.

Manchester, which has average yields of 5.9 per cent, saw house prices increase by 8.7 per cent over the past 12 months, according to Zoopla.

And Sheffield and Belfast, which came 46th and 43rd on Aldermore's tracker, have seen house prices grow by 7.9 and 7.7 per cent respectively.

Hamptons' latest four year forecast predicts the the greatest house price growth to take place in Scotland and the North East between 2021 and 2024. 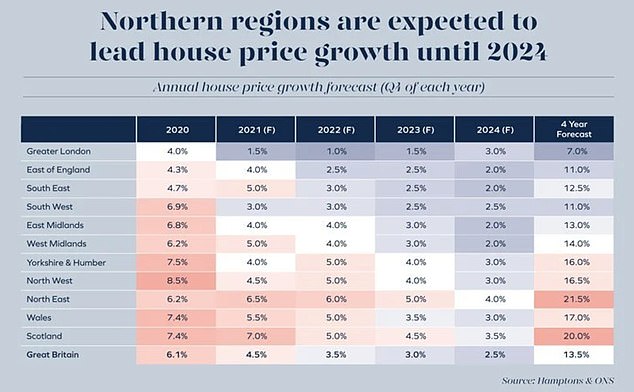 Northern star: Between now and 2024, Hamptons expects house price growth across the UK regions as prices in the North play catch-up with those in the South

It predicts property prices will rise by 20 per cent in Scotland and 21.5 per cent in the North East during the four-year period.

On the other hand, it only predicts London to experience 7 per cent house price growth in that time, whilst the South West and the East of England are set to fare little better with only 11 per cent growth anticipated. 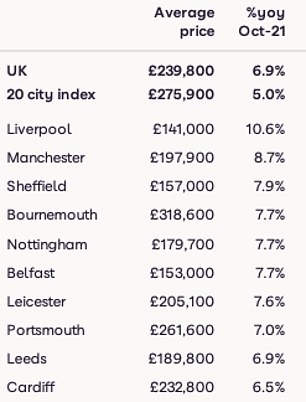 Liverpool, Manchester and Sheffield are the urban hot spots for house price growth at the moment, according to Zoopla's data

However, choosing a buy-to-let investment is not as simple as looking at where it is located on the map.

There is always an element of guess-work when it comes to predicting future house prices, but looking out for planned improvements in cities will help investors to make a more informed decisions.

For example, it could be that the transport network is being improved, major building projects are taking place, or that new retailers are popping up in the town centre.

'Manchester is a good example, having benefitted from the trans-Pennine rail scheme in recent years.

'Towns and cities fringing the Crossrail route will also prove good options, as the programme is estimated to contribute £42billion to the UK economy.

'This will dramatically improve transport links in London and the South East, as well as driving house-building, supporting wider regeneration and creating jobs and business opportunities.'