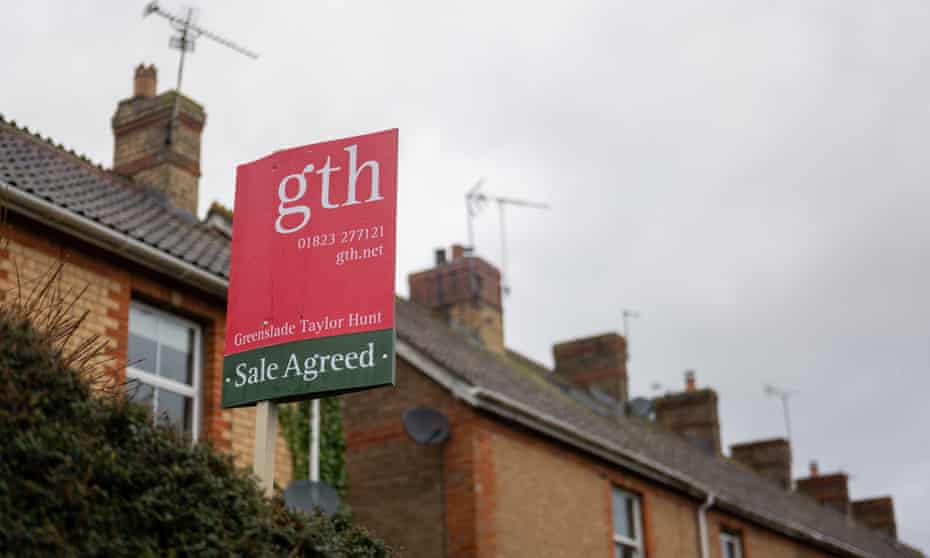 The average price paid for a home in Taunton went up by £56,546 in the 12 months to October. Photograph: Jim Wileman/The Guardian

Hilary Osborne
The race for space between homebuyers has pushed up prices in some UK towns by about a fifth this year, with Taunton topping a list of areas with the biggest increases.

It said that while across the UK prices had risen by an average of 6.2%, in a handful of towns growth had been treble that, fuelled in part by buyers reassessing their priorities as a result of the pandemic. 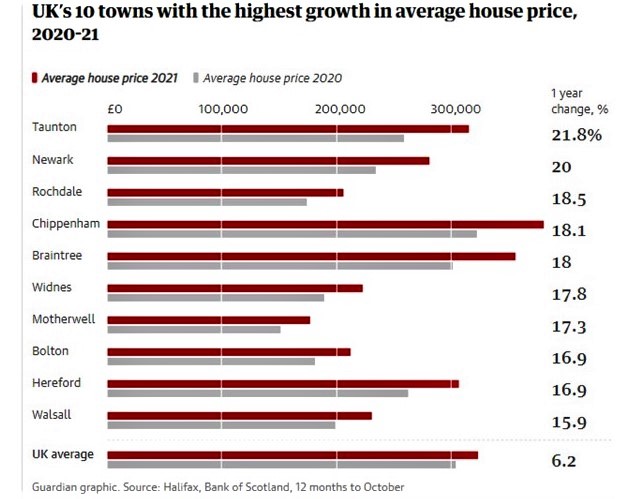 The lender includes London boroughs in its analysis of towns, and said none appeared in its table of the top 20 increases.

In three  Westminster, Hammersmith and Fulham, and Islington  prices had fallen. There were also drops in Airdrie and Coatbridge in Scotland.

The UK housing market has boomed since the first lockdown was eased, and this year it is expected to be the busiest since 2007.

For many months, estate agents reported high demand for large homes outside cities, as buyers who were working from home sought more space and placed less importance on living close to the office.

Stamp duty holidays across the UK also fuelled sales at the higher end of the market, where buyers could make the maximum tax saving. In England, the tax break on the first £500,000 of a propertys cost allowed buyers to save up to £15,000.

Russell Galley, the managing director of Halifax, said: As the county town of Somerset, this years house price winner, Taunton, has a lot to offer homebuyers with its high quality of life and great transport links to major towns and cities across the south-west.

Like Taunton, many of the areas that saw the biggest house price growth over the last year enjoy a combination of greater affordability and space compared to nearby cities.

Many of the towns that recorded big price increases were in the north of England, where prices were typically lower than the national average.

Separate research by Yorkshire building society, which analysed Land Registry figures, showed a similar picture, with eight of the top 10 highest price rises recorded in local authority areas in the north of England or Scotland.

Its strategic economist, Nitesh Patel, said the extraordinary price growth in many parts of the country had been driven by low borrowing costs, the return of low-deposit mortgages and falling unemployment, as well as stamp duty savings.

However, he added, two impacts of the pandemic may be even stronger drivers.

Due to the restrictions and less travelling, many households saved more than they normally would have, estimated at around £170bn of excess savings, he said. The second factor is the pandemic has encouraged a once-in-a-lifetime opportunity to revaluate housing needs. Buyers are seeking out more space to work from home as well as more outdoor space.

Halifaxs figures showed that for Greater London as a whole, the average price of a home fell by 0.6% to £554,684. However, this disguised a mixed picture across the boroughs.

Sign up to the daily Business Today email or follow Guardian Business on Twitter at @BusinessDesk
The London borough with the biggest increase in prices was Enfield, where the average cost of a home went up by 6.8% to £512,135.

Westminster in central London recorded the biggest fall in the UK, with the average price dropping by 6.9% to £738,088.

It is rare that no London boroughs appear amongst the areas of highest house price growth, but that is the case in 2021, said Galley. This shift echoes what we have seen from homebuyers over the last year  less focus on major cities and more demand in the suburbs and further afield.