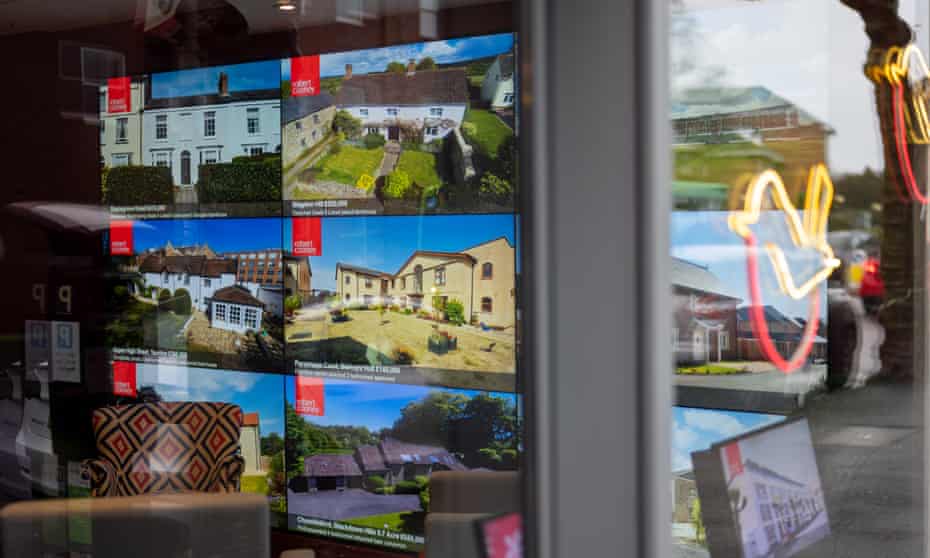 Taunton was the town with the strongest annual price growth, at above 20%. Photograph: Jim Wileman/The Guardian

UK house prices rose by more than 10% in 2021, the fastest growth rate in 15 years, according to new figures that underline the strength of the pandemic housing boom.

The price of an average UK home hit a record high of £254,822 in December, up nearly £24,000 over the year, according to data published on Thursday by Nationwide, the UKs largest building society.

Prices are now 16% higher than before the pandemic struck in early 2020, an outcome few economists anticipated as the UKs nations were embarking on the first in a series of lockdowns.

Yet after the initial freeze in activity, the housing market has remained buoyant throughout the pandemic. People forced to spend more time at home have looked for more space, while the UK government also heavily subsidised the market with a temporary cut in stamp duty and interest rates have remained near historic lows.

People seem to be looking for another way of living: how Taunton became property hotspot
Read more

The 10.4% annual growth rate in December was the strongest since 2006 and represented a slight acceleration from the 10% rate in November, although annual growth has been in double figures since May, barring a slight slowdown in October after the end of the stamp duty holiday. In June, annual price growth reached 13.4%, the fastest since 2004 during the housing bubble before the global financial crisis.

In contrast, average earnings rose by 4.9% in the year to October, according to the Office for National Statistics.

Robert Gardner, Nationwides chief economist, said continuing high demand and a persistently low stock of homes on the market had contributed to the soaring prices, but added that a slowdown may be on its way in 2022  and particularly if the Bank of England follows Decembers interest rate rise with further increases in the coming year.

The Omicron variant could reinforce the slowdown if it leads to a weaker labour market. Even if wider economic conditions remain resilient, higher interest rates are likely to exert a cooling influence.

Wales was the UK region with the fastest house price growth over a calendar year, 16%, for the first time since Nationwide started collecting the data in 1973. The south-west was Englands fastest-increasing region, corroborating separate data from Halifax, part of Lloyds Banking Group, which showed that Taunton was the town with the strongest annual price growth, at above 20%. Halifaxs measure of annual house price growth came in at 6.2%.

London, where house prices are already elevated, was the slowest-growing region, with prices rising by 4.2%. The capital was the only region in which price growth did not accelerate during 2021 compared with 2020. Nationwides measure of affordability showed that a London buyer with a 20% deposit would have to be in the top 10% of earners to be able to buy at the average price.