The property market is at a turning point. Analysts have called the peak of house price growth and demand is disappearing fast.

Mortgage approvals for home purchases fell in April to their lowest level in two years, according to the Bank of England, dropping below the pre-pandemic average for the first time since the 2020 housing market shutdown.

Remortgage activity also fell below the pre-Covid benchmark, which suggests that interest rates have finally climbed high enough to put an end to the race to lock in cheap deals.

Savills estate agents has forecast house price falls of 1pc next year, following 7.5pc growth in 2022. After this will come three years of sluggish growth. Transactions in 2023 will fall by 13pc year-on-year, it said.

Soaring inflation is hitting real take-home pay just as rising mortgage costs are depleting buyers borrowing power and the cost of living crisis is destroying their ability to save. 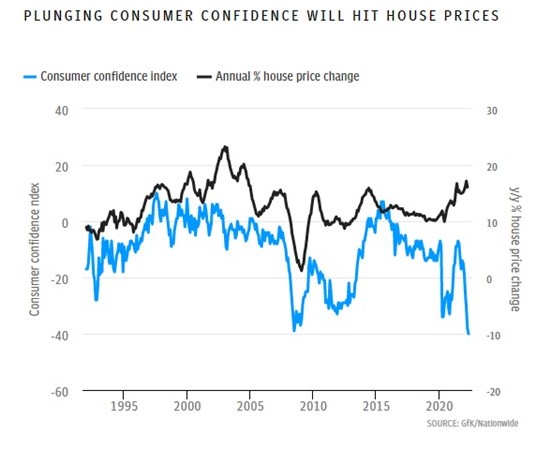 Consumer confidence has plunged to a record low, meaning buyers will become nervous of taking on more debt and stretching themselves financially to purchase homes. As the chart below, shows, in the past this has been linked to house price falls.

Sarah Coles, of fund shop Hargreaves Lansdown, said: At this stage, the property market is positively festooned with red flags.

Yet few analysts are anticipating a house price crash because there is still an extreme shortage of supply, and unemployment is at a record low. But how much could the economic outlook change?

Will there be a recession?

British GDP rose by 0.8pc in the first three months of this year. But much of this growth was driven by high levels of government expenditure on Covid support measures. Pantheon Macroeconomics, a research firm, has forecast that falling Covid spending will detract a whole percentage point from quarterly GDP growth this spring, pushing it into decline.

The cost of living crisis is 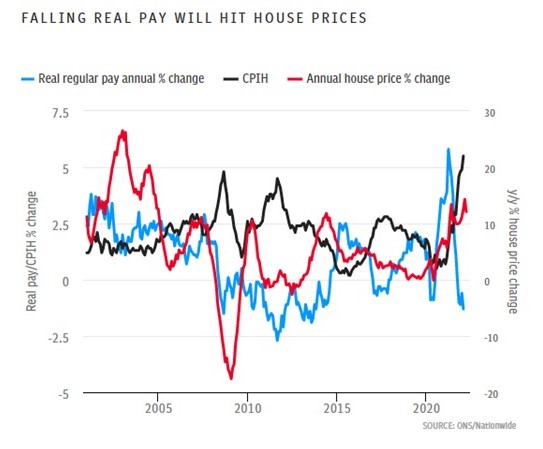 also taking its toll. Evidence is now accumulating that the squeeze on real disposable incomes is throttling the economy, Pantheon Macroeconomics said.

But it does not expect there to be two consecutive quarters of decline, which is the official definition of a recession.

Yet there are different ways to characterise recessions. On a larger scale, the World Bank defines a global recession as a year in which the average citizen sees a drop in their real income.

This is already happening in the UK. Real regular pay flatlined in October and has since fallen for four consecutive months, according to the Office for National Statistics. In February, real pay was down 1.3pc year-on-year. The Office for Budget Responsibility, the fiscal watchdog, has forecast the biggest drop in real earnings on record this year.

During the global financial crisis, "real" pay fell by 1.5pc. This corresponded with an 18pc drop in house prices, according to Nationwide building society.

The cost of living crisis will hammer the rental sector

There is a risk that unemplo 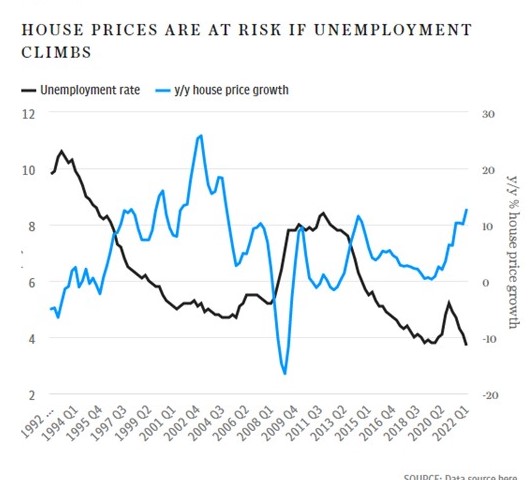 yment will rise, and this will hit lower income households first. This would bring a spike in tenants falling into arrears.

HOuse prices are at risk if unemployment climbs

Neal Hudson, of BuiltPlace analysts, said: It is renters I am most worried about. They were the worst hit by the pandemic, they are worst hit by the cost of living crisis, and they spend a higher proportion of their income on their housing costs. We will see the impact in the rental sector first, before the owner occupier market.

If a large number of tenants fall into arrears, there could be a wave of forced sales from landlords, said Mr Hudson. They are already feeling quite under pressure. A lot of them are reliant on debt; they are being squeezed by higher mortgage rates and by growing regulatory pressures.

Landlords catering to lower income tenants will be most exposed, said Mr Hudson. Many of these places are also the areas in the North and Midlands that have seen huge buy-to-let investment over the last five to 10 years because low house prices have meant investors can achieve much higher yields than in London and the South.

On paper, the yields in these places might look good, but when they factor in void periods and non-payments things will be pretty precarious, said Mr Hudson.

Forced sales, when homeowners have to accept discounts to sell fast, are one of the biggest drivers of house price falls. These are caused when people are no longer able to keep up with mortgage repayments, for example after losing their job.

The Centre for Economics and Business Research, a consultancy, has forecast that mortgage repossession claims will surge by 50pc by the end of this year. Over the next two years, they will jump 150pc; by 2024 it will be at the highest level since 2014, when the numbers were still inflated in the wake of the financial crisis.

repossessions will surge to their highest level since 2014

But this anticipated jump is still small on 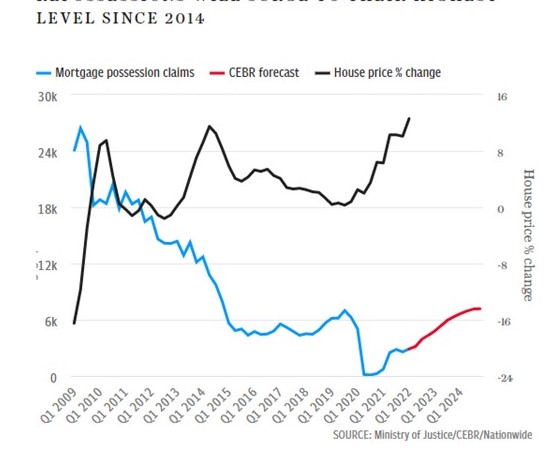 a historical scale and analysts do not expect repossessions to escalate dramatically  partly because the value of lenders portfolios will suffer too if they enforce mass repossessions.

'Stagnation rather than a crash'

Mr Hudson said: The big thing the regulators and lenders learned in the early 1990s is that they want to avoid big numbers of repossessions and forced sales. They have a lot of flexibility and capacity for forbearance for existing homeowners. That is why I think we are looking at house price stagnation rather than a crash.

But rising rates mean many homeowners may be pushed to sell up without being forcibly repossessed.

Ross Boyd, of mortgage comparison website Dashly, said: There is going to be a remortgage crunch. Many people are used to paying 1pc interest on their mortgages and will get a shock when they remortgage and find that rates have more than doubled, said Mr Boyd. Some will find they can no longer afford the repayments.

It is starting now. The number of two-year fixed-rate deals that will expire in June is enormous because so many people bought from the summer of 2020, said Mr Boyd.