Why Londons housing market is heading for disaster

House prices in London will fall by twice as much compared with the rest of the country as soaring interest rates cause a mortgage crisis.

Rocketing rates will hit the capital hardest because house prices are extremely out of kilter with wages, meaning buyers are more dependent on borrowing, analysts warned.

Chancellor Kwasi Kwarteng sent markets into turmoil last week after his mini-Budget triggered a drop in the pound to a record low, fears of even higher inflation and an expectation among investors that the Bank Rate will rise to nearly 6pc next year, up from 2.25pc today.

London is the most exposed to interest rate rises Andrew Wishart, of Capital Economics, an analyst, said: Very high prices relative to local incomes mean that the impact of rising mortgage rates on affordability will be more severe in London than anywhere else.

Historically, higher wages in London meant that mortgage payments on homes in the capital were actually lower as a share of income than across the rest of the country. That changed dramatically after the financial crisis. 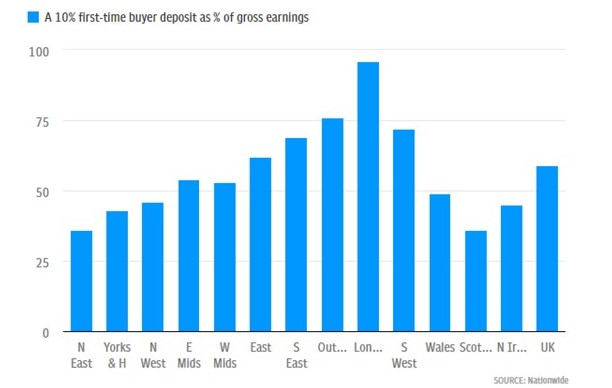 At the start of 2009, monthly mortgage payments on an average UK home were equivalent to 39.9pc of a median full-time salary, according to Capital Economics.

In London, the share at the time was lower, at 38.1pc. But then London house prices began to recover much more quickly than the rest of the UK  and since this point the balance has shifted dramatically.

Nationally, between April and June, monthly repayments on an average UK home were equivalent to 41.9pc of a median full-time disposable income  this was the same as at the end of 2009.

In London, by contrast, higher house prices meant monthly payments were equivalent to 51.3pc of a median salary. This was a gap of 9.4 percentage points, which is getting even wider as soaring mortgage rates dramatically push up the cost of borrowing.

This week, the average rates for two- and five-year fixed rate mortgages hit 4.78pc and 4.79pc respectively, according to Moneyfacts.

With mortgage rates at 4.7pc, monthly mortgage payments on a London property are 66.9pc of a median full-time disposable income, compared to 54.2pc across the UK as a whole. This is now a gap of 12.7 percentage points  and rates are only going to get higher. 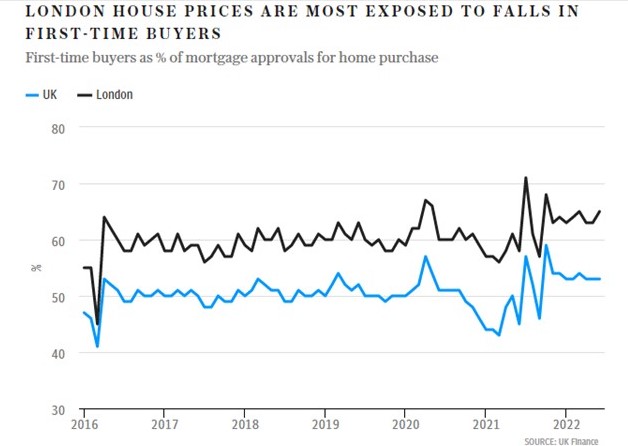 London buyers will also be worst hit by inflation

The chasm between London and the rest of the country when it comes to affordability is most extreme for first-time buyers.

Soaring inflation, which is making it much more difficult for renters to save, will also have a disproportionate hit in the capital because the deposit needed to purchase a home is much more wildly out of kilter with earnings.

Between April and June this year, a 10pc first-time buyer deposit in London was £46,425, according to Nationwide, a building society. This was more than double the £22,864 UK average.

Londons first-time buyers will be wiped out

High house prices in proportion to wages mean that Londons first-time buyers stretch themselves much further financially. In June, the average first-time buyer in the UK took out a mortgage that was worth 3.65 times their income, according to UK Finance. In London, the average loan-to-income ratio was much higher, at 3.9.

If the Bank Rate rises to a peak of 6pc next year, which is roughly what markets have currently priced in, this means that the average first-time buyer in London will simply be unable to get a mortgage.

Lenders must stress test borrowers who are taking out short-term fixed-rate mortgages to make sure that they will be able to afford to make payments if interest rates have climbed when their deals end.

This has a knock-on effect on house prices in the capital, which are most dependent on first-time buyers. In June this year, first-time buyers accounted for 65pc of all home purchase loans, according to UK Finance. This was the highest share in any region of the UK, and well above the national average of 53pc. 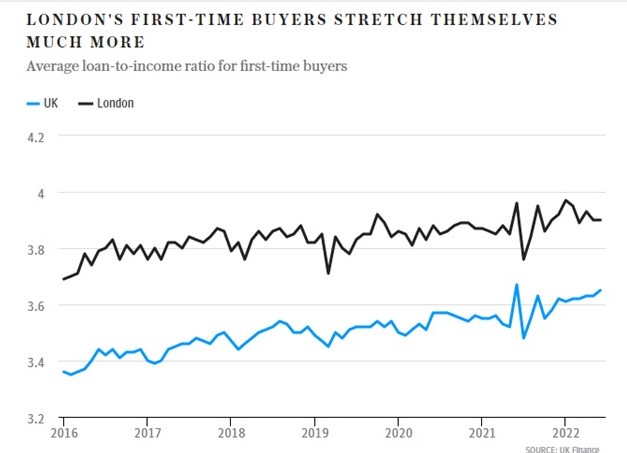 Londons homeowners face the biggest remortgage crunch
Because first-time buyers in the capital stretched themselves much further financially, Londons new homeowners who got on the first rung of the property ladder during the pandemic are also those who will have the least financial leeway when they come to remortgage.

This group of homeowners will be hit twice: high house price growth since the financial crisis meant they had to stretch themselves to buy. Now, Londons underperformance during the pandemic means these homeowners will face an even bigger disadvantage when they come to remortgage.

A London buyer who purchased an average £489,420 home two years ago with a 25pc deposit had monthly payments of £1,485 per month, based on an average mortgage rate in August 2020 of 1.6pc, according to Hamptons.

Over the last two years, national house prices rose by 22pc, but London saw average growth at half this rate. This means that when the London homeowner comes to remortgage after two years, they will only be able to reduce their mortgage size from 75pc to 63pc. A homeowner who purchased an average UK property under the same terms, by contrast, will be able to reduce their loan size to 57pc  and therefore get a lower mortgage rate.