Kwasi Kwartengs mini-budget: key points at a glance
For sale and sold signs outside houses 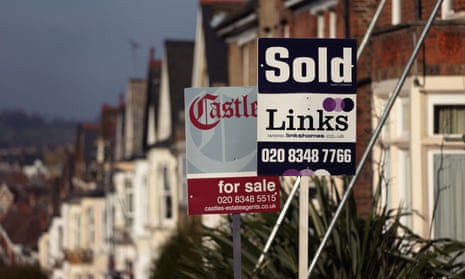 Some of Britains biggest mortgage lenders say they will be revising their offers within days. Photograph: Yui Mok/PA

More than 40% of available mortgages have been withdrawn from the market since the UK government announced its mini-budget on Friday, figures show.

Lenders began suspending products on Monday as they struggled to price them amid the uncertainty on financial markets  and the volatility and number of offers being removed have snowballed this week.

The latest data from Moneyfacts, which monitors the sector, revealed on Thursday that another 321 mortgages had been withdrawn overnight, taking the total to 1,621, with 2,340 remaining on sale. During the previous 24-hour period, 935 packages were pulled, double the previous record of 462 at the start of the pandemic lockdowns.

According to the financial research firm Defaqto, more than 20 providers have withdrawn their entire fixed-rate mortgage range.

Some of the biggest lenders said they would be revising their offers within days, while others preferred to wait until the the financial markets had calmed. HSBC, TSB and Kent Reliance were among the lenders to have withdrawn products by Thursday, said Moneyfacts.

Katie Brain of Defaqto said: What products are left are changing at a rapid pace, lenders seem to be really unsure of what to offer and what price with so many changes in the money markets at the moment.

First-time buyers have reported having their plans to buy a home wrecked by the escalating cost of mortgage finance. Homeowners with fixed-rate products, most of them lasting two years, say the cost of remortgaging has doubled the interest payments, adding more than £2,000 a year to the typical annual cost.

The cost of mortgages soared on Monday after financial traders pushed up the cost of borrowing to UK institutions. Forecasts that the Bank of Englands base rate is on course to rise to 6% from 0.25% only a year ago meant lenders needed to re-price their products, in some cases for the fifth of sixth time this year.

Swap rates used to insure borrowing over a long period rose on Monday. The two-year swap rate increased from 0.45% to above 5%, leading lenders to remove two-year mortgages from their product range.

Advertisement
Analysts expect the central bank to raise rates by at least 1% when they meet at the beginning of November after the chief economist Huw Pill said a significant increase was needed after an adverse reaction to tax cuts in the mini-budget.

The chancellor, Kwasi Kwarteng, announced £45bn of tax cuts, in addition to an energy price cap costing £150bn. He said further tax cuts should be expected in a full budget in November.