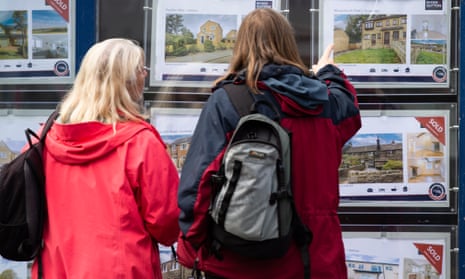 Homeowners and potential buyers have been left feeling totally powerless this weekend as thousands wait to find out whether their mortgage deals will now cost them hundreds of pounds extra a month while brokers report people already pulling out of the market or preparing to downsize.

The chancellor Kwasi Kwartengs mini-budget on 23 September has resulted in 40% of mortgage products being withdrawn in the past week, with many potential buyers still waiting to hear what they will pay and others being offered higher rates or reduced loan sizes.

People were worried about the energy crisis and how they were going to heat their homes, but this is a different type of fear, said Michael McLaughlin, a mortgage broker in Northern Ireland. Now its Are we going to have roofs over our heads? They just feel totally powerless.

People are responding to the situation in different ways, he said, with some planning to sell their homes and downsize or move in with family members as they cannot afford the hikes in repayments.

Some of McLaughlins clients have paid a penalty fee in the past few days to exit their current fixed-rate mortgage deal in order to secure a higher rate now, fearing it may go higher still. Its because theyre not willing to wait to get an even higher rate next year, he said. Theyre paying a penalty to break their contract to do that.

Meanwhile, one property company in his local area has paused its planned development, estate agents are reporting fewer bookings for viewings, and customers are waiting for up to an hour or more to speak to their lenders on the phone.

Its like an icy fear, the speed at which this has happened compared with [the housing market crash in] 2008. The collapse has been seismic and so quick, said McLaughlin, who works for Mortgage and Insurance Directions in Newcastle, County Down.

Heather Tang, 34, had already missed out on her dream family home when the chain of buyers collapsed earlier this year. She and her family, who are planning a move from London to Macclesfield, Cheshire, found a different property to buy but are now waiting to find out what mortgage rate they have been accepted for. With the sale of their current home progressing and no clarity from the bank, they have been left in the dark about what the future holds.

We havent agreed anything, so I just dont know what were going to do. Im seeing people being offered 6% to 10% [interest rates], Tang, a librarian, said. I know house prices are coming down but theyre not coming down that fast, and in the meantime were kind of homeless because we still have to sell our house.

She added: We cant really do anything else now [except wait]. Were so close to selling our house, so we cant go back on that, and we need to move, so theres not much else we can do.

Robbie Coffin, 33, an NHS administrator from Aldershot, Hampshire, and his partner had an offer on a two-bedroom bungalow accepted in April. The survey showed it needed additional work so they lowered the offer, which was accepted, meaning that although they had previously agreed a 2.5% fixed-rate deal, their new mortgage is yet to be approved.

Were in this massive queue that seems to be getting longer to see if it gets approved, but we dont know if well be able to afford the mortgage if the rate is higher, Coffin said. We are in limbo, and thats the worst thing.

Others have already given up the search. Louise, a project manager who didnt want her surname used, had a mortgage offer of 2.65% six months ago on a three-bedroom house in Kent with her partner. Last month, the seller pulled out, and now the rate rise has seen them put off any decision to move until 2024. Its just no longer viable, with rising interest rates and commuting costs into London, she said. A new mortgage offer for the same amount of loan would now cost £200 a month more, at least. In the meantime, house prices have risen by an extra £20,000 [since March]. Its really tough, but what can you do?

Rightmove, the property website, said data showed the number of potential buyers asking to view properties on Monday and Tuesday last week was down 3% compared with the same days in the previous three weeks. The number of sales agreed on Tuesday hit its highest since early August, as buyers rushed to get a mortgage before rates rose further.

Marc von Grundherr, a director at the estate agent chain Benham and Reeves, said: Those who already have their terms have remained largely unhindered, with their sales progressing as planned.

Thats not to say everyone has, though, and weve seen a handful of cases where buyers have had the rug ripped from beneath them by banks withdrawing their pre-agreed mortgage offers.

1 September: NatWest offered a rate of 3.59% fixed for two years. The monthly payment would have been £910 a month.

1 September: Coventry building society offered a rate of 3.39% fixed for two years. The monthly payment would have been £1,484.

1 October: NatWest offers a 4.3% remortgage rate fixed for two years. This gives a monthly payment of £1,634

Previously, buying our first home seemed hard, but possible. Now its completely out of reach
Earlier this summer, Alex, a charity worker from Sussex, was hopeful that he and his partner, Jo, would be able to buy their first home soon. The couple currently rent a flat in Brighton, where Jo works in the events industry, spending roughly £1,500 a month on rent, council tax and utilities.

We had a meeting with a mortgage adviser three months ago, the 27-year-old says. We were told that we could afford a house just north of £400,000. We were looking at anything with bedrooms and a bathroom, really, this area is expensive. But we were really excited.

We had another meeting with a mortgage adviser on Friday, just after the mini budget was announced. We found out that our budget has suddenly gone down to just under £360k, because we would be looking at mortgage rates of 5 to 6%. It felt like a rug was being pulled.

Things have only gotten worse since then. There are no mortgage deals we could apply for at the moment. Previously it seemed hard but possible, now its completely out of reach.

Since the initial shock has worn off, the couple has been looking at houses in areas further away from their jobs, but so far, the search has only added to their disappointment.

Weve been looking at towns and villages 10, 20 miles out of Brighton, such as Worthing and Littlehampton, Alex says.

On Monday, we viewed a property in Littlehampton, we had had it booked in for a while. It literally had mushrooms growing out of the floorboards, and all the walls in the basement were covered with mould. That house was £400,000.

Unless the market changes significantly, Alex says, he cant see how they will be able to find a property in a commutable area that will be affordable.

Increasing their deposit from the existing 20% they were hoping to put down is the only option, he believes, but, with a combined household income of around £50,000, whatever they put aside could end up getting overtaken by rising rates and house prices.

I do sometimes wonder whether house prices will come down, which would be great for first time buyers like us, but terrible for home owners. Recently, Ive had to dip into my savings, because of rising costs and energy bills. I feel as if Im grieving a loss, because right now I dont think Ill ever be able to afford a house.