House prices to drop 20pc as early as next year, bank warns

Lloyds Banking Group is bracing for house prices to slump by as much as a fifth next year as it warned of a hit to mortgage lending amid mounting interest rates.

The FTSE 100 lender said it expects the UK economy to shrink at least 1pc next year, and by as much as 4.5pc in a worst case scenario.

Profits at Lloyds fell to £1.5bn during the three months to the end of September, down more than a quarter from a year earlier and well below analyst forecasts of £1.8bn.

Lloyds said that higher interest rates and the bleak outlook for the economy is likely to lead to a slowdown in mortgage lending over the next year.

Its base case scenario assumes a 7.9pc drop in house prices, but at worst they could crash by almost 18pc. Commercial property prices are forecast to drop by at least 15pc , with a slump of 36pc predicted in the worst case.

Charlie Nunn, chief executive of Lloyds, said: The current environment is concerning for many people and we are committed to maintaining support for our customers."

Lloyds has been overly pessimistic before. It previously forecast that house prices would fall by as much as 30.2pc between 2020 and 2022, with even its base case model predicting a 0.7pc decrease. Instead they soared to record levels after the pandemic hit, as lockdowns sparked a rush among buyers for more space and properties in rural locations.

The fall in quarterly profits was partly driven by a decision to set aside more money to cover an anticipated surge in defaults on loans and mortgages. It made provisions of £668m to guard against this risk of unpaid debts, up from £119m last year.

Lloyds' share price fell by as much as 4pc to 40.8p following the update.

William Chalmers, chief financial officer of Lloyds, said the house price boom during the pandemic had made it more difficult for prospective buyers 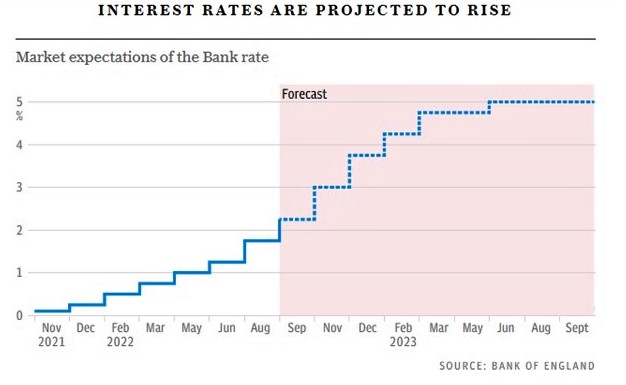 to get on the ladder or move homes.

He said: We're likely to see a bit of a slowdown in mortgage lending over the course of the next twelve months in response to slightly higher interest rates and the slightly tougher macro-economic environment.

It is reasonable to expect the mortgage market to slow down during that time period. We will of course see a number of customers coming up for refinancing of their mortgage product, and we'll be making a full offering to those customers and making sure that customers are in as good a position as possible to afford that going forward.

Traders are betting on an 0.75 percentage point increase in interest rates when the Bank of Englands Monetary Policy Committee meets on Thursday next week. Threadneedle Street has already raised rates from 0.25pc to 2.25pc this year in an attempt to tame rampant inflation.

Mr Chalmers said the bank will be passing about half of rising rates through to savings customers, in line with its competitors.

Lloyds posted a 19pc rise in net interest income - the difference between the interest a bank charges on loans and what it pays to consumers for deposits - to £3.4bn for the quarter, but said this was offset by one-off charges.