261: Daniel Hannan MEP - Speech to European Parliament on state of UK economy - videos, text, others speeches, state of the nation

If you like this Special Report, please forward to family / friend / colleague. The first YouTube video is particularly worth listening to. It describes Britain's endebtedness issue. It takes 3 mins. If you want a more balanced viewpoint, go to the second video, the Channel 4 interview - where a Labour spokesperson makes his views known.

You Tube Videos of Daniel Hannan MEP's speeches and interviews below:

Daniel Hannan  - interview of Channel 4 on 36,000 hits in a day after attack on Gordon Brown (also recommended if you have time)

Daniel Hannan - The dangers of a common European energy policy

Daniel Hannan - The EU has become a racket

Daniel Hannan - Spain's land-grab laws Quote from Daniel Hannan in aftermath of Speech.  The internet has changed politics - changed it utterly and forever. Twenty-four hours ago, I made a three-minute speech in the European Parliament, aimed at Gordon Brown. I tipped off the BBC and some of the newspaper correspondents but, unsurprisingly, they ignored me: I am, after all, simply a backbench MEP. When I woke up this morning, my phone was clogged with texts, my email inbox with messages. Overnight, the YouTube clip of my remarks had attracted over 36,000 hits. By today, it was the most watched video in Britain.

How did it happen, in the absence of any media coverage? The answer is that political reporters no longer get to decide whats news. 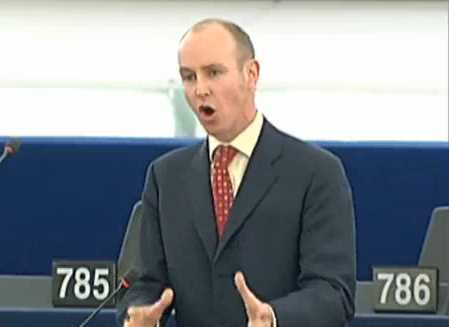 Prime Minister, I see youve already mastered the essential craft of this Parliament  that being to say one thing in this chamber, and a very different thing to your home electorate. Youve spoken here about free trade, and amen to that; who would have guessed, listening to you just now, that you were the author of the phrase British Jobs for British Workers, and that you have subsidised - where you have not nationalised outright - swathes of our economy, including the car industry and many of the banks.

The truth, Prime Minister, is that you have run out of our money. The country as a whole is now in negative equity. Every British child is born owing around £20,000. Servicing the interest on that debt is going to cost more than educating the child.

Now once again today you tried to spread the blame around, you spoke about an international recession; an international crisis. Well, it is true that we are all sailing together into the squall  but not every vessel in the convoy is in the same dilapidated condition. Other ships used the good years to caulk their hulls and clear up their rigging  in other words, to pay off debt  but you used the good years to raise borrowing yet further. As a consequence, under your captaincy, our hull is pressed deep into the water line, under the accumulated weight of your debt. We are now running a deficit that touches almost 10% of GDP  an unbelievable figure. More than Pakistan, more than Hungary  countries where the IMF has already been called in.

Now, its not that youre not apologising - like everyone else, Ive long accepted that youre pathologically incapable of accepting responsibility for these things these things - its that youre carrying on, wilfully worsening the situation, wantonly spending what little we have left. Last year, in the last twelve months, 125,000 private sector jobs have been lost  and yet youve created 30,000 public sector jobs. Prime Minister you cannot go on forever squeezing the productive bit of the economy in order to fund an unprecedented engorging of the unproductive bit.

You cannot spend your way out of recession or borrow your way out of debt. And when you repeat, in that wooden and perfunctory way, that our situation is better than others, that were well place to weather the storm, I have to tell you, you sound like a Brezhnev-era Apparatchik giving the party line. You know, and we know, and you know that we know that its nonsense. Everyone knows that Britain is the worst placed to go into these hard times. The IMF has said so. The European Commission has said so. The markets have said so, which is why our currency has devalued by 30%  and soon the voters, too, will get their chance to say so.

They can see what the markets have already seen: that you are a devalued Prime Minister, of a devalued Government. 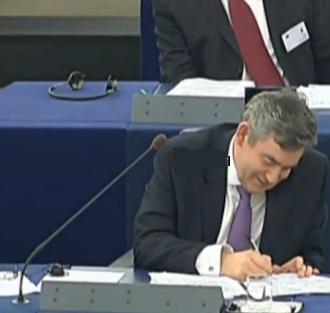